A Lone Man's Struggle with Grief in Tibet 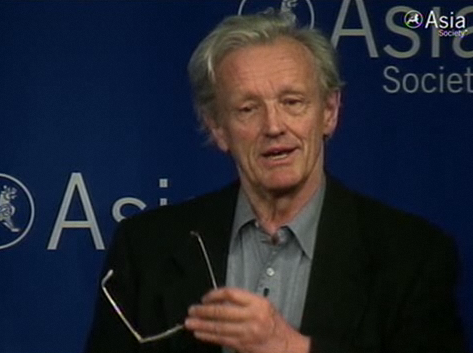 New York, March 8, 2011- Veteran travel writer Colin Thubron pushed his limits both physically and emotionally with his latest journey to Mount Kailash, the holiest mountain on Earth located in Tibet. Hoping to confront the loss of his mother, the last surviving member of his family, and the meaning of loneliness and impermanence, he trekked along the Karnali River and up the 18,000-foot mountain. His new memoir-cum-travel book, To a Mountain in Tibet, offers a striking look at the power of silence, faith and grief.

In conversation with Martin Brauen, chief curator at the Rubin Museum of Art and the world's foremost expert on mandalas, Thubron explained why he chose to climb Mount Kailash. "It was like a sacred object, it wasn’t connected with any particular religion, or ideology or dogma, like say walking to Jerusalem, or to Canterbury, let alone to Mecca. It was simply something holy in the landscape."

He says he decided to travel alone because, "above all, you don’t have this constant reaffirmation of your own culture, in which you are going in this bubble looking out saying 'isn't that peculiar, isn’t that funny.' You’re the funny one if you’re alone, you’re the strange one in the landscape. And you can more quickly come to some understanding of where you are."

Thubron’s personal views on death and solitude permeate the book, a change from some of his earlier, more informal works. Brauen questioned whether this trip changed Thubron's ideas about death. Although Thubron labeled himself agnostic, and claimed that he did not feel drawn towards Buddhism as a religion, he noted, "I did feel something of the spaciousness and grandeur of the Buddhist view. That what continues is not humans, but that what continues is karma, the weight of good and evil in the world."

Brauen concluded by asking the question on everyone’s mind, "Do you have a plan for your next travels?" Unfortunately, Thubron had no plans to reveal, but readers across the English-speaking world are hoping he won't wait too long.