A filmmaker jams with sights and sounds of Tokyo 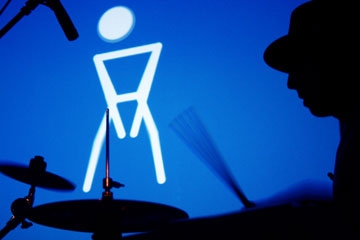 NEW YORK, October 29, 2010 - Asia Society's auditorium echoed Tokyo's underground music scene tonight as the film Live From Tokyo made its world premiere. The documentary takes the viewer through the back streets in Shinjuku, the intersections in Shibuya, the alleys in Koenji, and all over Tokyo, as it highlights the innovative musicians who create this multi-faceted artistic culture.

After the screening, film director Lewis Rapkin joined La Frances Hui, Asia Society's Senior Program Officer of Cultural Programs, in a conversation about his film. Rapkin discussed the inspiration that Tokyo's bustling and innovative musical landscape gave him, both as a filmmaker and musician, laying special emphasis on the diversity and "hodgepodge" of elements present in Tokyo's music- and media-saturated streets.

Rapkin's film explores not only the artistic and creative aspects of the music scene but also its business structure and restrictions. An example of these is the so-called Noruma system, in which bands that wish to play at a venue have to cover a specific cost through ticket sales or their own money, making playing music a luxury in itself.

Rapkin and his small crew experienced the Noruma system firsthand when they created a band and played at a live house in Tokyo. Despite the cost, Rapkin remembers the occasion fondly, thinking of the fee not as a setback, but as an incentive to "play even better."

Rapkin's film, and his experience playing in Tokyo (as well as listening to all of the bands that are featured in his film), testify to the deep cultural communication that can be achieved through music.

About the director
Lewis Rapkin is a NYC-based filmmaker and musician. He has worked on documentaries for PBS, HBO and is currently editing a TV series for the Discovery Channel. As a musician, he has worked on soundtracks for industrials and short films and has composed the original music for Live From Tokyo.

Asia Society's screening of Live From Tokyo was co-presented with New York-Tokyo.