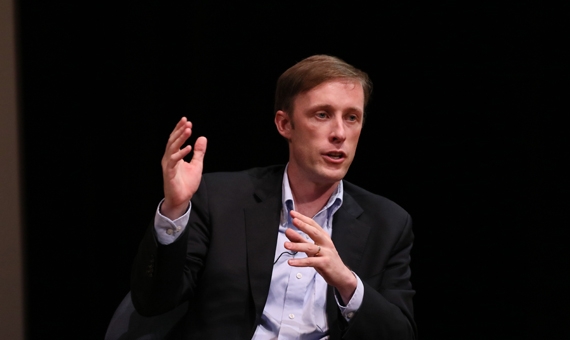 When Jake Sullivan, chief foreign policy advisor to the Hillary Clinton campaign, spoke to an Asia Society audience last month, the media picked up his remarks about Donald Trump. This was understandable — the Clinton campaign had been gentle to that point in its treatment of the GOP’s new standard-bearer, but on this night Sullivan called Trump “tremendously dangerous,” and laid out a soft-spoken but pointed attack.

"The ideas he's putting forward and the temperament that he has displayed make him a dangerous proposition to be commander-in-chief," said Sullivan, before launching into a list of contradictory statements the would-be nominee had made, and his tendency to veer wildly from one foreign policy position to another.

Sullivan spoke at the Asia Society in response to our invitation to the foreign policy advisors of each of the presumptive nominees to address Asia and global policy issues. The Trump campaign has not yet accepted our invitation.

Of Trump’s view that more countries should be able to obtain nuclear weapons, Sullivan said this “has the very real risk of sparking a nuclear arms race, and also makes it increasingly likely that terrorists will get their hands on nuclear weapons, which is the greatest threat that the United States faces.” He added that Trump had created more risk by saying we “should simply order our military officers, against the law, to kill the families of terrorists. He has said many things along those lines. If you add up the totality, however you slice it, whichever pieces you accept, the picture that is painted is one of a tremendously dangerous risk.”

While Sullivan’s statements on Trump garnered the media attention, they were actually the footnote to an hour-long, wide-ranging look at American foreign policy, in particular policy toward Asia. As the moderator, Asia Society Policy Institute President Kevin Rudd, remarked, prefacing his last question, “We’ve gone nearly an hour and no one has uttered the ‘T-word.’”

That hour produced a dialogue that was remarkable — in this sound-bite-driven, Twitter-mad political season — for its depth and intelligence. One could disagree with Sullivan on any number of the issues raised; but you couldn’t ignore the fact that he was able to lift the level of discourse in a refreshing way.

How often have we heard the words “global architecture” spoken on the campaign trail? When was the last time you listened to a campaign advisor engage in a nuanced, sophisticated conversation about the use of American power, or U.S. policy towards China?

The future of the global order, said Sullivan, was among the most profound questions facing the next president. Asked to name an idol, Sullivan chose Harry Truman, who he said had been “more responsible than anyone else for building a global architecture for the 20th century.” The tandem of President Truman and his Secretary of State Dean Acheson, Sullivan said, had represented “the best traditions of American statecraft.” The two leaders, he said, had “built a web of institutions, alliances, across the Atlantic of a depth and texture that doesn’t exist across the Pacific.”

That post-World-War II order, Sullivan argued, had been “like the Parthenon,” with columns that included the United Nations, NATO, and the various Bretton Woods institutions. Now? “We’re entering a phase of the Frank Gehry international order,” he said, referring to the architect known for his complicated designs. “It’s not clean lines. It’s surprising, it’s sometimes formal and sometimes informal, sometimes linear and sometimes ad hoc, sometimes shiny and sometimes not. That is hard for people who grew up with a certain view of how rules and institutions are supposed to operate.”

Indeed, seemingly “clean lines” and simplistic answers have been the norm lately, on both sides of the political divide. Sullivan sees a far messier state of affairs, for which a globalized, doctrine-free foreign policy is required.

Nowhere is that more apparent than in the Middle East, which in recent years has endured collapsing state structures and the rise of jihadist groups, most notably the Islamic State. Some Republican leaders have blamed the Obama Administration for abandoning the region; some Democrats have suggested the U.S. is still too inclined to intervene; the 2011 intervention in Libya and Washington’s inability to stop the strife in Syria have come in for criticism by both sides. On the Asia Society stage, Sullivan argued for the imposition of safe zones in Syria, provided and protected by the U.S., to safeguard refugees and help in the delivery of humanitarian aid. He also said that for all their differences, there was no solution that didn’t involve the U.S. and Russia working together. As for Trump’s policy prescriptions for the Middle East, Sullivan said these were particularly hard to decipher, beyond his much-discussed proposal to ban Muslim immigration. Trump has argued against U.S. intervention, then called for a U.S. deployment of 30,000 soldiers to fight ISIS; he has suggested that Syria and ISIS “fight it out”, but also that we should “let Russia fight ISIS”; he has said he would tear up the nuclear deal with Iran, and then that he would keep it in place but “police” it more effectively.

Sullivan checked off what he called “three deeply interconnected trends” in the Middle East: The collapse of state structures, a virulent form of Islamic fundamentalism, and the geopolitical struggle between Iran and Saudi Arabia. “The U.S. must grapple with all three crises at the same time; solving the third, however, can help with the first two … Any outcome must involve a modus vivendi between Saudi Arabia and Iran”.

Sullivan was among a small group of officials who opened secret negotiations with Iran in 2012 that eventually resulted in the nuclear agreement that Iran struck last summer with six world powers. That deal has been criticized for leaving a significant portion of Iran's nuclear infrastructure intact. Not surprisingly, Sullivan staunchly defended the deal, arguing that it was far better than any available alternative, that walking away from it would be catastrophic, and that the U.S. must follow through fully and fairly in its implementation. Still, he said the U.S. must also reserve the right to respond to Iranian acts of aggression that reach beyond the deal itself. “It’s not going to be pretty,” Sullivan said. “Not going to be easy.” He noted that Iran has “engaged in a pattern of belligerence,” and stressed the need to assure allies in the Persian Gulf that the U.S. will respond to such actions.

On terrorism generally, Sullivan argued for “looking beyond the military, hard side of counterterrorism,” and for a global mechanism to deal with the problem.

“We tend to reinvent the wheel every time there’s a terrorism situation – but we need more permanent means for the international community to come together,” Sullivan said. “What do we do to mobilize the nations of the world?” With the U.N. and other multilateral institutions “moribund” in terms of counterterrorism policy, there was, he argued, an urgent need for a global counterterrorism forum — “a more permanent means of global cooperation.”

In the tour d’horizon of Asian trouble spots, Sullivan told the Asia Society audience that one of Hillary Clinton's top priorities as president would be to use sanctions to pressure North Korea to negotiate limits on its nuclear program, a strategy that would mimic the Obama administration's approach to Iran. "Those negotiations were set up by a comprehensive, highly tailored, highly resourced effort that involved basically every significant economy in the world getting together and putting real pressure on that regime in a concentrated, sustained way," Sullivan said. Sullivan is skeptical that North Korea will ever give up its nuclear weapons program completely. North Korea has conducted four nuclear tests since 2006. The regime is amassing nuclear weapons material and could have enough for 79 nuclear bombs by 2020, according to leading nuclear experts.

As was the case in Tehran, he said the North Koreans' "expectations and understanding of their choices need to be reshaped."

This led to a discussion about China, which Sullivan said would have to be part of any strategy to increase pressure on North Korea. “I believe in the possibility that the U.S. and China can cooperate on North Korea,” Sullivan said. “I don’t think we’re there yet. This has to be one of the first and most important pieces of business in the first summit between the next president and [Chinese leader] Xi Jinping." More generally, said Sullivan, the U.S. and China have the werewithal, with responsible stewardship, to build a constructive relationship beyond the day-to-day tensions. Sullivan said China has "not fully lived up to its responsibilities as a world power," but added that he remains optimistic that the U.S.-China relationship would improve. “A strong, thriving China that is playing by the rules is very much in the interests of the U.S.”

How does the American campaign look, to officials in Asian capitals? Sullivan echoed a concern that world leaders are — to use President Obama’s word — “rattled” by what they see and hear on the American hustings. The concerns one hears most often involve a new American isolationism, on the one hand, and a fresh and dangerous U.S. unilateralism on the other. Testifying on Capitol Hill recently, several former U.S. officials addressed these global concerns. Zalmay Khalilzad, President George W. Bush’s last ambassador to the United Nations, said that Asian leaders he knows are “scared of diminished U.S. resolve and commitment.”

Sullivan and Rudd discussed these dangers with genuine concern, but in stark contrast to the doom and gloom we hear on the campaign trail, both remained optimistic in their outlook about the world and America’s place in it. Their discussion showed flashes of humor as well. “I met my wife at the Munich Security Conference,” Sullivan told Rudd, “where all good romances begin.” And when Rudd, a former Australian prime minister and foreign minister, suggested that Sullivan, at 39 years old, was young for his stature, the Clinton advisor smiled.