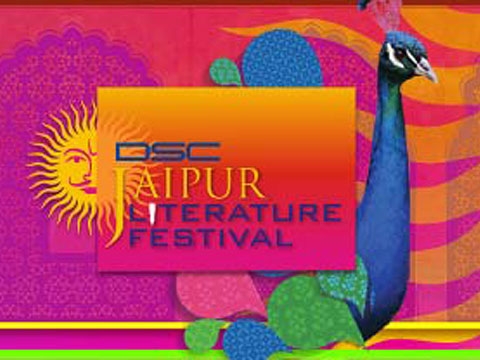 JAIPUR, January 21-25, 2011 - In its sixth year, the "Great Indian Mela," aka the Jaipur Literature Festival, only continues to grow, and discussion rooms were overflowing with participants during the rambunctious five-day celebration of literature.

Among the luminaries present in the Pink City was Turkey's Nobel Laureate, Orhan Pamuk, who spoke at length on the nature of politics and love, and their influence on his writing. The author of My Name is Red and Snow told listeners, "I do believe, rather naively perhaps, that the human heart is the same everywhere, although our histories, cultures, classes, and individual stories make us different."

American Pulitzer Prize-winner Junot Diaz (The Brief Wondrous Life of Oscar Wao) ruminated that the American novel is not dying, but rather that the pace of American life is changing, and that the novel is a reflection of this flux. “As long as readers are falling in love with books, there is no crisis,'' he stated.

While international authors drew a lot of attention at the Festival, Indian authors came out in force as well. Representatives of officialdom included Karan Singh, Ashok Gehlot , Pavan Verma, Aditi Ghosh, Navtej Sarin, Kapil Sibal, and Mani Shankar Aiyar. Hundreds of attendees had to be turned away from a discussion that brought together poets and lyricists Javed Akhtar and Gulzar on Saturday.

The multilingual nature of contemporary literary culture in India was very much on display in this year's Festival. Panels were debated fully in Hindi, and another concentrated on Marathi Theatre. Kashmiri poetry was heard in Urdu. Asia Society India Centre’s own panel on Migritude featured a collaborative reading of "Dreaming in Gujarati," a poem by Shailja Patel, in both English and Gujarati. Meanwhile, a recital/performance of Bulle Shah's poetry in Punjabi, by Ali Sethi and Madan Gopal Singh, proved to be a mesmerizing highlight.

The controversy raised by Open magazine editor Hartosh Singh Bal, who suggested that the Indian literati are still beholden to the "Literary Raj" to justify their work only served to heighten the success of the festival. A celebratory mood was in the air throughout the festival, with Indian and international music performances extending into the cool Jaipur evening and lively conversation peppering every corner.