Individualism in the Beijing Underground 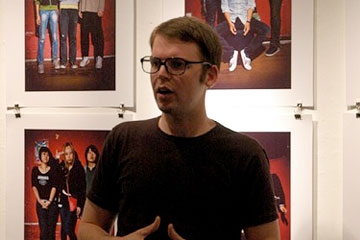 WASHINGTON, November 9, 2009 - Matthew Niederhauser presented the photographs from his book Sound Kapital: Beijing's Music Underground at the Govinda Gallery in Georgetown in conjunction with Asia Society Washington. The photography exhibit documents an emerging class of musicians frustrated with modern life in China, who are performing in underground music venues beyond government-controlled media.

Contrasting the Chinese government's push for "consumerism based on western principles of capitalism" with socialist idealism, Niederhauser shows how this ideological rift has spawned a counter-culture of young Chinese musicians dissatisfied with the nation's contemporary social and moral values.

The photographs feature preeminent underground bands from Beijing standing in front of a red wall in the backstage of D-22, a popular local music venue. Their clothing is influenced by American popular culture and style but re-adjusted to fit the Chinese context. The bands' facial expressions and body language range from silly, to awkward and uncomfortable, the latter, which Niederhauser claims are his favorite.

Beijing is considered to be the epicenter of these creative forces. Four underground music venues in Beijing— D-22, Yugong Yishan, 2 Kolegas, and MAO Livehouse—provide a stage for these artists to articulate what Niederhauser describes as their "intensity, sincerity, and ingenuity" with "fresh, independent, and frequently irreverent voices" outside of the government-controlled media channels. The music showcased in these nightclubs encompasses several genres including punk, rock, folk, electronic and experimental music.

Acknowledging that "one of the big challenges to alternative music in China is the lack of venues and audiences," these establishments also supply the listeners necessary to lend bands the credibility and self-confidence needed to motivate themselves as performers.

The growth of alternative music culture is attributed to the rise of communication technology. Instant messaging software like ‘QQ' or ‘MSN Live,' cellular phones, and social networking websites allow people with eclectic tastes to connect. These technologies are a platform for music and the arts by helping to unite an emerging civil society whose tastes and predilections differ from common popular culture.

Bands face numerous challenges, including rampant piracy and restrictions on public concert performances, which hinder their ability to reach wider audiences. To avoid confrontation with Chinese authorities, many bands perform songs that contain subtle and indirect lyrics. For example, a song by Carsick Cars called Zhong Nan Hai (a popular cigarette brand and the central headquarters for the Communist Part of China) contains a double entrende that can be interpreted in different ways.

Despite local challenges, independent artists from China, especially Beijing, are gaining national and international attention. "The future is hard to predict," admits Niederhauser, "but we're in the middle of something new. It's weird being part of the myth-making process."