I am not Here | Asia Society Skip to main content

I am not Here 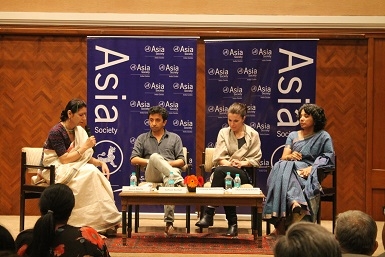 MUMBAI, 18 December 2015 – Asia Society was delighted to host the first screening in India of I am Not Here, a film on migrants, produced by the Office of the United Nations High Commission for Human Rights and directed by Ashvin Kumar. The screening was followed by a panel discussion about the film where Kumar was joined by Christina MacGillivray, Co-Producer & Lead Researcher, Jeroo Mulla, Former Head of the Social Communications Media Department, Sophia Polytechnic, and Shai Venkatraman, former Mumbai Bureau Chief, NDTV 24/7.

The film follows the stories of three migrant workers who leave their home countries in search of opportunities for employment in an attempt to provide a life-line for their families back home. The discussion delved deeper into the filming process, Kumar and MacGillivray shared incredulous stories of the travails faced by the women protagonists as they lived in fear of their status as undocumented migrants and elucidated on the challenges faced as the film was made. Language proved to be a barrier for Kumar and MacGillivray; while filming they resorted to focussing on the tone and intonation of the migrant women.

Venkatraman drew the focus of the conversation back to India, sharing that 75% of the population of female migrant domestic workers were added to the workforce in 2015 alone. Stressing on the need to address issues of migration close to home, Venkatraman and Mulla emphasised the necessity to reflect upon how we treat domestic workers in our own homes. The evening provided a platform for the audience to actively engage with the panellists, depicting how deeply the issue resonated with the audience and members of the public.

This programme is part of our AsiaLens Series, presenting an array of perspectives on the visual and performing arts of modern Asia, offering a vibrant and nuanced view across the continent. Previous events under this series include a special pre-release screening of 'Margarita with a Straw', a special pre-release screening of The Lunchbox, the India Premiere of 'Saving Face', and the India premiere of 'Fire In The Blood'.