The Asian Pacific American (APA) workforce is incredibly diverse – not only demographically, but also in how they perceive working in their respective companies. Consider for a moment APA backgrounds representing multiple geographical regions and generational status, age of entry into the U.S., time committed to their company, the type of work they do, sexual orientation, and education level – a list of distinguishing factors far from exhaustive, but eliciting the breadth and depth APAs bring to the workplace. While the demographic portrait of the APA employee is becoming more vivid with each Corporate Survey report, the pathway for career growth and progression to executive leadership remains a challenge. What does it take to keep an APA engaged with an organization, and what must companies do to make APA representation at the executive level proportionately representative? As this 2014 report shows, the answer is complex and multifaceted.

No Mincing Words, The #1 Engagement Driver – Work-Life
Work-Life, termed Job Itself in 2013, remains the number one engagement driver for APA employees, even higher than last year! This means that above all else, companies must adhere to the components that are important for a rich life at work and at home. For Asian Pacific American employees, Work-Life is about having a sense of pride in all aspects of one’s being. To manifest this pride, employees need to be recognized for individual strengths, be able to bring their authentic self to work, and know that their company supports their cultural needs. Organizations with strong Employee Resource Group support (via time, resources, and senior leadership presence) report higher Favorable scores. The focus is not about “balancing” time between work and life obligations. Organizations that recognize competing interests and offer ways for employees to address both work and life creatively and in a zone of respect simply do better.

95.4% of APA Employees Really, Really Care!
Survey results show that APA employees are very invested in the success of their company. The statement “I really care about my company’s overall success” received the highest score ever achieved in this survey, with a Favorable rating of 95.4%! Additionally, when it comes to feeling a sense of belonging as an APA employee, Favorable ratings reflected an 8.8% increase from 2013 – a noticeable jump. Among Best in Class organizations, 75% of APA employees report high satisfaction. Three of the top 10 engagement drivers are in the Commitment to the APA Community category; these three survey items are new this year and emphasize the importance of company image and personal life. Further, over 60% of all APAs stick with their employer for at least five years – that is commitment in a time of change. However, companies should not get too comfortable with this statistic, because this newer generation wants a pathway for career progression (job titles that indicate movement). Leaders must seize the moment while optimism is high, to pre-empt the possibility of APAs seeking opportunities with other organizations.

Who’s Coming to the Board Meeting? Not APAs – Only 40% Believe There is Adequate Representation
The APA participants in this study tell us that diversity is front and center for just about everything their company does. However, Fortune 500 companies are not all the way there yet when it comes to achieving widespread Favorable ratings for this dimension. Survey questions rated every diversity question highly, with the exception of “There is adequate representation of Asian and/or APA individuals on my company’s board of directors” (40.4% Favorable, 29.9% Neutral, 29.6% Unfavorable). However, when it comes to leadership movement and recognition, the question about APA role models in executive positions garnered significantly higher marks in contrast to past years. Asian Pacific Americans are beginning to move upward, but still do not have a seat on the Board.

APA Market Opportunities: Where Are the APA Employees?
The future of business is vivid, with Asia in the landscape of opportunity. Asian Pacific American employees give their company leaders a 70% Favorability rating for understanding the Asian market (domestic and abroad). Unfortunately, 50% of all survey participants either are not included or are simply unaware of their company’s strategy for penetrating APA markets. Best in Class organizations not only recruit APA employees into business and market strategies, they also consider the Asian market in terms of consumers and suppliers.

Community, Community, Community! (3 of the Top 10 Engagement Drivers Link to Community)
Community matters. Get involved through action and engagement, because this connects directly to APA identity, which is influenced by community cultural values – and most importantly by family values. Asian Pacific Americans agree they are afforded opportunities to volunteer in the APA community and nonprofit organizations. Three of the top 10 APA employee engagement drivers are about Commitment to the APA Community, and this dimension is more prominent compared to previous survey results. Asian Pacific American employees indicate that their organizations can do more, both financially and in recognizing the community beyond Asian Heritage celebrations, holidays, and festivals. Asian Pacific Americans place value on bringing their true self to work, and making linkages to their communities is one of the easiest, most cost effective, and most visible ways for a company to demonstrate authenticity.

Coach, Mentor, Sponsor: APAs Don’t Get Enough (Just 55% Get Mentored, 24.5% Are Sponsored)
This Corporate Survey offered the opportunity for a deeper dive into the perceptions APAs hold about coaching, mentoring, and sponsorship. Mentoring is a demonstrated and proven avenue for members of the organization at any level to access and glean personal insights in relation to career growth. Mentoring is offered in 95.3 % of Best in Class companies, but in 88.3% of Non-Best in Class – and only 55% of first and second generation APA employees participate in mentoring. Likewise, coaching is available at 82% of Best in Class companies and 72% of other companies. In terms of participating in a sponsorship relationship, just 24.5% of all employees had done so, and of those, 31.4% were from Best in Class and 17.4% from other companies. Coaching, mentoring, and sponsorship provide the personal touch that APAs crave to promote a feeling of being a valued member of the organization, which in turn links to critical engagement drivers.

Engage 1st and 2nd Generation APA Employees Now, Before Time Erodes Their Motivation
Most of the participants completing this survey represent first generation status, with 59% of first generation APAs arriving in the U.S. at the age of 21 or older. Consistent with past Corporate Survey reports (and reflected in this year’s data), overall Favorability diminishes as APAs remain in the U.S. longer. Since APAs really care about their organization, company leaders must find ways to incorporate a personal touch, beginning with the onboarding process. Fortune 500 companies featured in the Best Practices section of this report describe exemplary strategies: a series of curriculums, programs, systems, and more proffer a comprehensive approach to making new APA employees feel welcomed, embraced, and immediately immersed in a network of support.

Lesbian, Gay, Bisexual, and Transgendered APA Employees Are Happy, But Not Satisfied
Lesbian, Gay, Bisexual, and Transgendered (LGBT) employees score Diversity, Professional Growth & Development, and Commitment to the APA Community higher than their straight/heterosexual colleagues. However, LGBT employees trail behind in all other dimensions. This insight is critical, because individuals who identify as LGBT tend to be marginalized within the APA community. As social acceptance continues and business growth strategy calls for a broader market diversity, business leaders must be clear in not only enabling LGBT employees through diversity endeavors, but also including them in their business strategy.

The More Educated an APA Employee, the Less Satisfied (In Some Cases 50th Percentile)
Asian Pacific American employees holding advanced degrees (JD/MD/PhD) report significantly lower Favorable ratings for Diversity (70%), Professional Growth & Development (55.5%), and APA Market Opportunities (58.3%). Fifty-nine percent of those identifying as first generation arrived in the U.S. at the age of 21 or older, and 62.5% have a graduate degree. In essence, over 90% of first generation APA employees in today’s Fortune 500 companies reached the U.S. fresh from their country of origin with a post-secondary degree or intentions to pursue one. Companies can help this group understand their potential through targeted coaching, establishing a network of peers, coordinating mentoring relationships with others like themselves, and assigning sponsors to advocate for them. 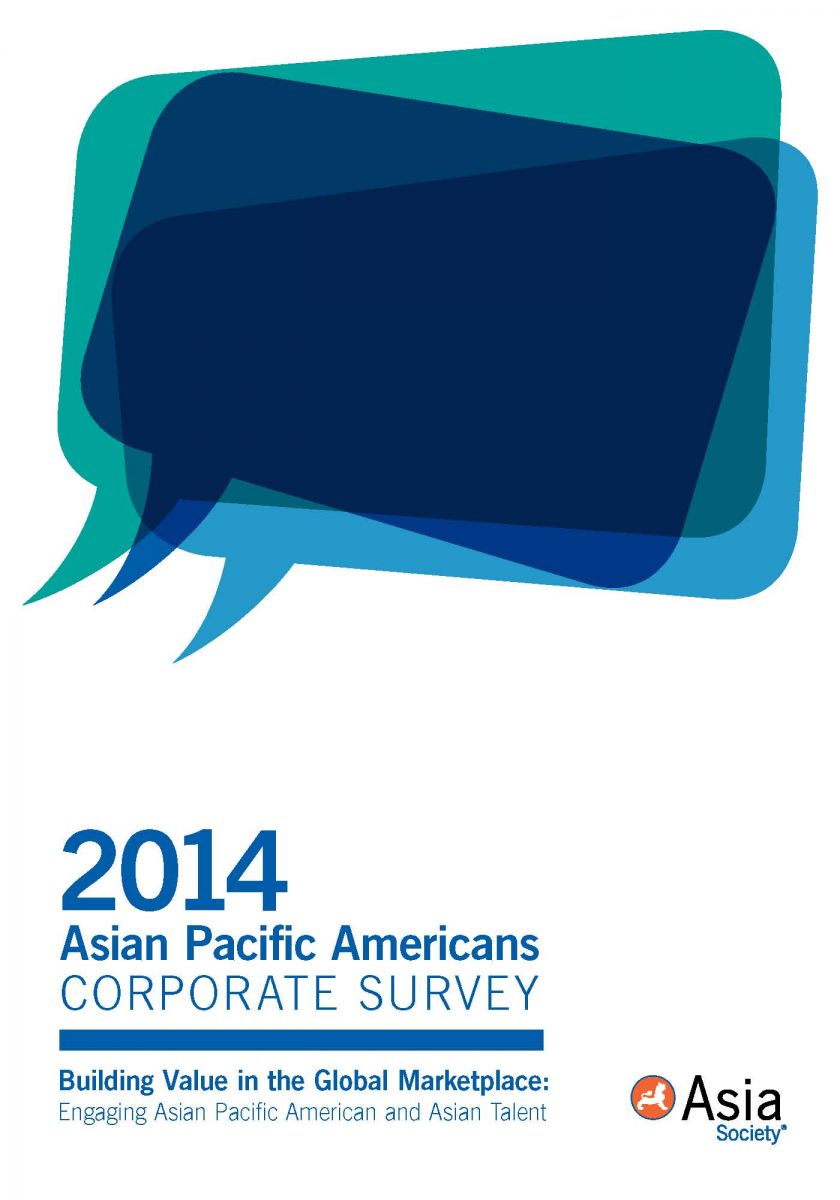