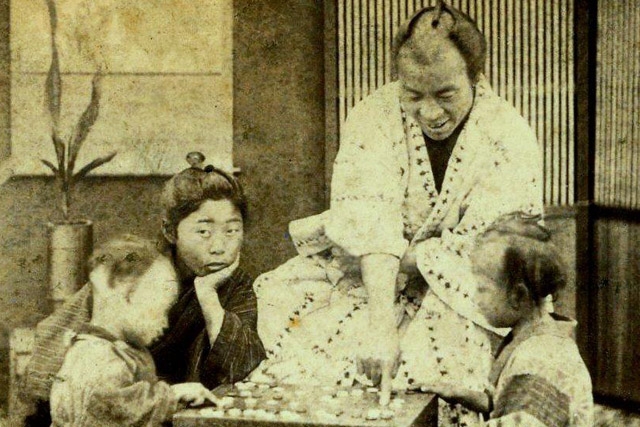 Note: Many dates are approximate. Some developments emerged over a period of years, and precise dates for events before A.D. 600 have not been determined. Notice how long the prehistorical era was compared to other periods.

YAYOI (300 B.C. - A.D. 300) Rice cultivation, metalworking, and the potter's wheel are introduced from China and Korea. Era named "Yayoi" after the place in Tokyo where wheel-turned pottery was found.
In Shinto, Japan's oldest religion, people identify kami (divine forces) in nature and in such human virtues as loyalty and wisdom. 100-300: Local clans form small political units.

ASUKA (645 -710) A great wave of reforms called the Taika no Kaishin (Taika Reforms) aims to strengthen the emperor's power.
New aristocratic families are created. Especially powerful is that of Fujiwara no Kamatari, who helped push the reforms.

NARA (710 - 794) Imperial court builds new capital, modeled upon Chang-an in China, at Nara. Though emperors are Shinto chiefs, they patronize Buddhism in the belief that its teachings will bring about a peaceful society and protect the state.
Legends surrounding the founding of Japan are compiled as history in the Kojiki (Record of Ancient Matters) and the Nihon shoki (Chronicle of Japan). With the adoption of Buddhism as the state religion, its monasteries gain political power.

KAMAKURA (185-1333) Military government established in Kamakura by Minamoto no Yoritomo. Emperor, as figurehead, remains in Kyoto with the court aristocracy.

1274, 1281: Kublai Khan's Mongol invasions are repelled with help of kamikaze ("divine winds," or storms). Defense against these invasions weakens structure of the military government at Kamakura.

1467-1568: The 10 year-long Onin no Ran (Onin War) brings disintegration of central government, followed by the Sengoku Jidai (Era of the Country at War). Firearms introduced by shipwrecked Portuguese soldiers (1543),Christianity by Francis Xavier (1549).

AZUCHIMOMOYA MA (1568 -1600) Oda Nobunaga starts process of reunifying Japan after a century of civil war; he is followed by Toyotomi Hideyoshi (1536-1598). Foundation of modern Japan is laid.
Hideyoshi's ambition to conquer Korea and China is thwarted by local resistance. Arts such as painting, monumental decorative designs, and the tea ceremony continue to flourish.

MEIJI (1868 -1912) The emperor is restored; Japan makes transition to nation-state.
Dispossessed bushi become soldiers, policemen, and teachers with fall of feudal system and political reform. New national policy is to make Japan a rich and powerful country, to prevent invasion by Western powers. Emphasis is on building a strong military and strengthening industries. Japan becomes world power through victories in Sino-Japanese (1895) and Russo-Japanese (1904-05) wars. Korea annexed (1910-45).

1941: Pearl Harbor brings United States into war in the Pacific.

August 1945: first atom bomb is dropped on Hiroshima, the second on Nagasaki. The emperor airs by radio a statement of unconditional surrender.

The late 1950s to the early 1970s is called the "High Growth Age" in Japan because of the booming economy. Highlights of the era are the Tokyo Olympic Games in 1964 and Expo '70 in Osaka. In 1972 relations with China are normalized.

HEISEI (1989- ) Global issues foster debate.
In 1989 Prince Akihito succeeds to the throne. In1991 the Gulf War ignites controversy over Japan's role in the international community. Should Japan strictly protect the "peace" constitution of 1947, a major cause of its prosperity? Or should it contribute troops as well as financial support to United Nations operations? In 1993, after Japanese troops are pulled out of a United Nations operation in Cambodia, the arguments go on: Should Japan become more internationally minded? Or should domestic peace and prosperity be the main priority?

Crystal ball gazing: What will you be doing 25 years from now? As Americans, how will your lives be affected by Japan? Draw on your knowledge of Japan's geography, history, and cultural values to predict how its influence will be modified by other peoples and nations.