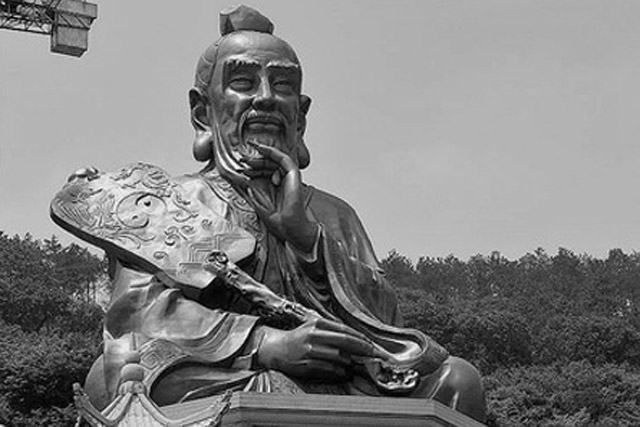 Laozi (“Old Master,” sixth or third century b.c.e.)
The concept of Dao is more often associated with the figure Laozi and the classic Dao de Jing (The Book of the Way and Its Power) than with Confucius. It is not certain whether they were contemporaries. Their philosophies, though, are like two sides of a coin. Laozi emphasized harmony with the Dao–a referent to something that cannot be named–in order to achieve balance in life. To assist this process, Laozi taught his followers the concepts of non-action (wuwei) and shade and light (yin/yang–primordial, dynamic balancing of opposites). The principle of non-action meant that one should discern the natural course of things and cooperate with that movement. Thus, if a person was good at making clothes, he or she shouldn’t become a cook. The concept of yin/yang reminded Laozi’s students to look for the balancing forces of opposites and learn how to cooperate with and embody them. The teachings of Laozi and Confucius were not incorporated into a religious movement until the Han dynasty (206 BCE–220 CE).

The result was a mix of philosophy and religion. Over the centuries that followed, both Confucianism (Rujiao—the teachings of the scholars) and Daoism (Daojiao—the teaching of the Way) developed elaborate rituals and sacred writings. To this day the philosophies of Laozi and Confucius, and the religious movements their lives and teachings inspired, exist in vibrant forms in Chinese, Korean, Japanese, and Vietnamese culture as well.