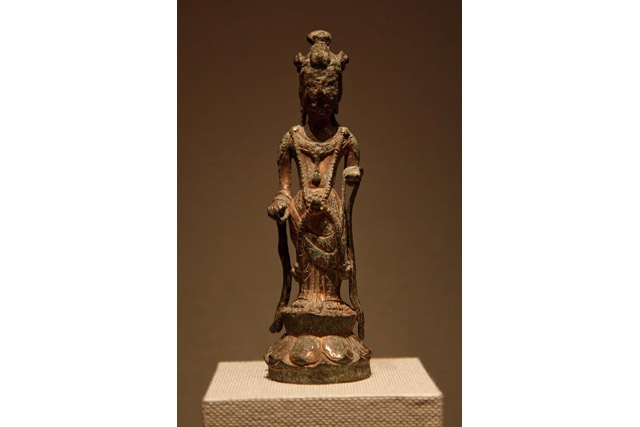 The elaborate mechanical toys in 7th century Korea is described by a Korean monk some five hundred years later. This essay reveals to the reader a little about the technology and trade of that time.

During the period 763-764, Silla mechanics contrived a set of automatic mechanical toys, the Mountain of Ten Thousand Buddhas which utilized the force of the wind. This description is from Memorabilia of the Three Kingdoms, written around 1279 by a Korean monk.

The King of Silla hearing that Emperor Tai Zong of China was an ardent believer in Buddhism, wanted to send a gift to the Emperor and ordered his mechanics to make one. It was a miniature mountain, about two meters high, on a multicolored carpet decorated with a carved wooden base and beautiful jewels. The mountain was composed of exquisite rocks and stones, and there were dolls of various countries which were singing, dancing, and playing musical instruments in the valleys and caves.

Many miniature Buddha images were also placed on the mountain. The size of the heads ranged from that of Indian millet to that of green beans, but they had distinct ears, eyes, mouths, and noses. The mountain itself was hardly visible. It was called "The Mountain of the Ten Thousand Buddhas." Gold and precious stones were used for various kinds of flowers, trees, streams, hermitages, towers, and pavilions. Although small in size, they appeared life-like. There were more than a thousand dolls in the image of monks at the front, and underneath three golden bells were hanging in a pavilion with whale-shaped belfries. When the wind blew, one saw all the monks bow to the ground and chant prayers since the bells contained automatic devices for moving the monks. Emperor Tai Zong, on receiving that automatic mechanical toy, used all kinds of superlatives in praising it. He commented that the craftmenship was not that of a man but that of a genius endowed by Heaven. In fact, all who looked at it were amazed at its delicacy.

Although Silla was influenced greatly by Chinese culture and technology, this elaborate mechanical toy amazed even the Chinese Emperor.