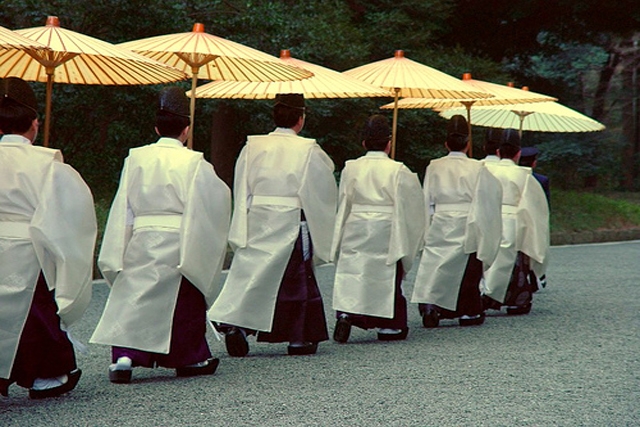 Shinto (literally “the way of the gods”) is Japan's native belief system and predates historical records. The many practices, attitudes, and institutions that have developed to make up Shinto revolve around the Japanese land and seasons and their relation with the human inhabitants. Expressions of Shinto beliefs toward nature include the recognition of a divine spirit (kami) in venerable old trees, large mountains, and tall waterfalls, as well as celebrations of the highlights of each season. (This reverence is often expressed by the placement of a small shrine next to the natural element being celebrated or garlanding it with a white rope.) Traditionally, Shinto also involves purification rites and customs to overcome the polluting effects of death and decay. However, Shinto does not espouse a moral code, lacks religious scriptures, and does not conceive of a life after death.

The introduction of Buddhism to Japan did not cause the abandonment of Shinto. Instead, the pantheons of both religions were expanded so that Buddhist figures adopted complementary Shinto identities and Shinto kami were thought to strive toward Buddhist enlightenment. In this way, new converts to Buddhism were not obliged to abandon their traditional beliefs, and Buddhism was able to appeal to a wide range of people.

The earliest sacred items associated with Shinto practices are the mirrors, swords, and jewels found in ancient burial sites. It was not until the arrival and influence of Buddhism, with its long traditional of producing anthropomorphic representations of Buddhist deities, that statues and paintings of Shinto divinities started to be produced, around the eighth century. Without scriptural descriptions of the appearance of kami, early craftsmen of Shinto images depicted them as men and women in secular, courtly costumes and attitudes. Traditionally, these icons were hidden from the view of practitioners, kept in closed inner sanctuaries of shrines, and venerated from the outside.