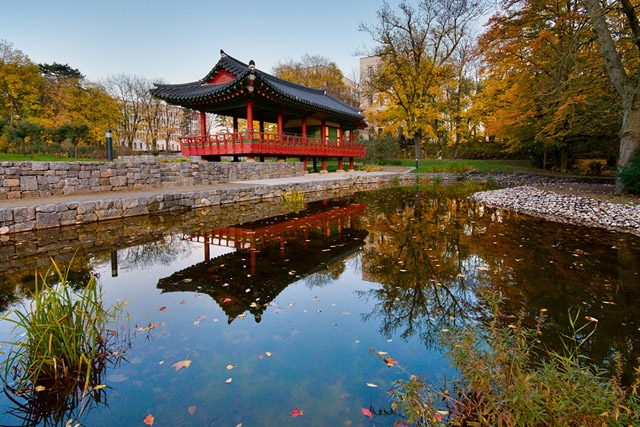 The Korean people have always taken pleasure in the life of the present. They immerse themselves in the beauty of their land, their rivers, and the four distinct seasons that visit them every year. Their ancestors migrated from Siberia and Manchuria across the vast plains in search of a warmer climate. Because they settled of their own free will, they shaped a history peculiarly their own. According to legend, Tan'gun first founded the nation. His father was a heavenly deity who decided to settle on earth in response to the ardent desire of the earthlings. A tiger and a bear wished to be transformed into human beings but the bear alone was transformed into a woman. The heavenly deity married her to beget Tan'gun.

The legend might be dismissed merely as evidence of traditional animal worship. We should note here, however, that a deity wanted to become human. Even the animals wanted to become human. The Korean people did not consider the earth a place of exile where erring dieties were sent to repent. This country was the subject of their dreams, the country so good that even deities and animals wanted to live here. The Korean people, it is apparent, felt gratified throughout the ages to have chosen this place for their home. The Chinese similarly expressed their wonder at the beauty of Korea. "I would rather live in Korea and see Diamond Mountains," says one of their ancient verses.

The people of Korea praised longevity (another manifestation of their love of their land) and idealized their desire for it in the person of the hermit. In their imaginations a hermit was a man who lived in poverty in the deep recesses of unapproachable mountains, on medicinal herbs believed to prevent aging.

Throughout their long recorded history Koreans never invaded their neighbors. Reticent in their outlook, Koreans did not seek an empire or colonize other lands. Foreigners to the south of the nation, or those of the northern territories were all called "barbarians." This excessive national pride, together with Koreans' aversion to war, eventually invited aggression and subjugation of the Korean people. Korea suffered for many years as a Japanese colony. Among many Korean proverbs is "preferring an earthly field of dung to the wonders of the nether world"—in other words, Koreans prefer the present life, no matter how sordid it may seem, to an imaginary heaven. Korean literature has many tales reflecting such thinking. Typically a beautiful lady descends from heaven in search of a fuller life on earth, inevitably marries a human, becomes a mother, and eventually fulfills the chores expected of every married woman. She then goes back to her home in heaven. We usually have no reference to what becomes of her after she departs. In Korea we find no literature that remotely resembles the content of Western literature about heaven and hell.