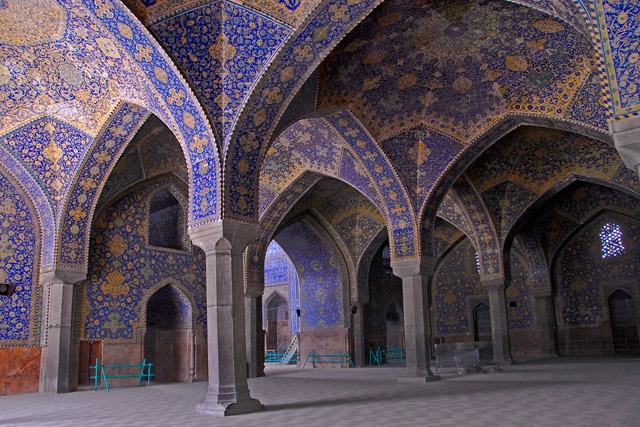 The Safavid Dynasty, a Golden Age in Iran, witnessed a cultural flowering under the charismatic Isma'il and and his son Tahmasp, the first two Shahs of the dynasty. This essay is a short history of the Safavid Dynasty.

In the late 13th century, Shaykh Safi al-Din Ishaq founded a Sufi order at Ardabil in Azarbaijan, where he attracted followers among the nomads of Eastern Anatolia and Azarbaijan. From the 14th to the mid-15th century, the Ardabil Shrine continued to attract Sufis and increase in wealth and fame. The shaykhs of Ardabil were Sunni Muslims until the mid-15th century, when they espoused Shi‘ism. By that time, the Shaykh Safi’s successors had become increasingly militant and their armies had come to wield significant power in the region. The Safavid family intermarried with the Aq Qoyunlu Turkmen dynasty of Tabriz, which controlled most of western Iran during the last quarter of the 15th century. Eastern Iran and nearby sections of Central Asia were ruled by the rival Timurid dynasty.

In 1499, at the age of twelve, Isma‘il made his bid for power by moving into Anatolia. By 1501, he had secured Azarbaijan and crowned himself shah at Tabriz. In 1503, he added Shiraz to his domains, followed by Baghdad in 1507 and Herat in 1508. Persia, the region that we know as Iran, was united politically and geographically under the banner of Shi‘ism. In 1514, Isma‘il’s armies were defeated by the Ottomans, who occupied Tabriz for only one week. The Safavids returned to their capital, but the Ottoman threat continued into the next reign.

Upon Isma‘il’s death in 1524, he was succeeded by his first son, Tahmasp. Born in 1514, Tahmasp was sent to serve as governor of Herat in 1516. Tahmasp’s education continued at Tabriz after his nominal accession to Safavid throne. In 1533 he took full control of the government from his guardians and continued to exercise power until his death in 1576. During the course of Tahmasp’s fifty-one year reign, the Safavids, sandwiched between the Ottomans to the West and the Uzbeks and Mughals in the East, were constantly challenged to keep their domain intact. Despite the fact that his life was largely shaped by wars and insurrections that kept him moving from one region to another, Tahmasp became a great patron of the arts. An atelier of court artists and poets accompanied him on his campaigns.

Tahmasp’s immediate successors were less important both as rulers and as patrons of the arts but there was a revival under Shah Abbas (1587–1629) when the state had increased power and the arts, commerce and religion flourished. After his death, the empire gradually declined although the Safavid dynasty survived into the18th century.