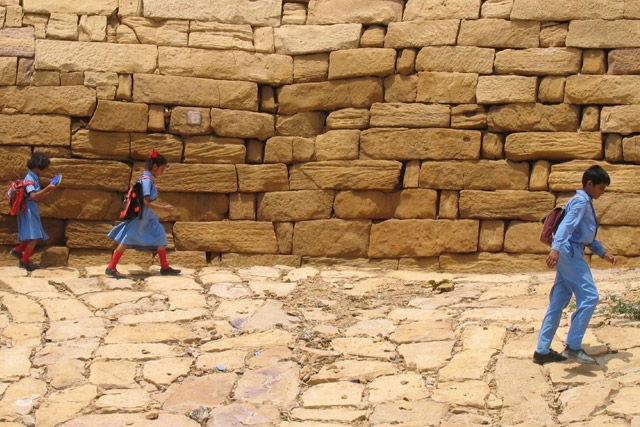 In this reading, the author introduces five themes that are central to understanding modern India. As with any set of generalizations, there are exceptions, and not all authorities will agree with the author. As you study more about India you will be better able to come back to Buultjen's five ideas and decide whether you agree with him.

Five important features which will perhaps give us some aid in understanding modern India:

Many people in the Western world think of India as an inert and distant [grouping] of people and poverty, a combination of the exotic and tragic. This misperception, popularized through years of media stereotyping, conceals reality.

In fact, India is a vibrant society with an increasingly vigorous internal dynamic and an increasing influence, directly and indirectly, in the world. Its significance lies not only in its size—some 930 million Indians are 15 percent of the planetary population—but also in the questions raised by the path India has chosen in domestic and foreign policy. This nation is the largest functioning democracy, with regular and freely contested elections. Thus, it is the test of whether democracy is a suitable system of govemment for large numbers of relatively poor people_in a world where democracy, as we understand it, is a much-endangered political species, especially in Third World countries.

Modern India is also a test of two middle-ground philosophies. As an early proponent of non-alignment in international politics, India has attempted to establish a [middle] position between Western and [communist] oriented states. Over the years, its leadership in carving out a Third World posture demonstrated that there is a viable route for nations who did not want to take sides in Cold War politics, an approach which many other nations in Asia, Africa, Latin America, and the Middle East have followed and hope to sustain.

India's economic policies have also broken new ground. They were the first large-scale test of the modern mixed economy: central government planning with a combination of both private and public ownership of economic enterprises. It is perhaps still too early to evaluate the results. On the one hand, poverty remains [widespread] and unemployment is high. On the other, Indian agriculture has performed much better than either Soviet or Chinese agriculture. (India now feeds her population and has imported hardly any grain in the past four years.) Also, India now ranks as the ninth largest industrial economy in the world. A further significance of India today comes from the geopolitics of South Asia. Bordering the Indian Ocean into which the Persian Gulf flows, it is a key location in an era of oil logistics. Add the proximity of Russia, Afghanistan, Pakistan and China, and India's situation becomes critical to the tensions and interactions of current global politics. From this perspective alone, apart from the many human, cultural and other reasons, it behooves thoughtful people around the world to make efforts to understand this vast and vital nation.

It is possible to say almost anything about India and have it apply to some part of that subcontinent. India is a land of [poverty] and, in some ways, of plenty. It is a nation both powerful and weak, ancient and modern, climatically dramatic in its contrasts. The very term "India" implies a unity which exists more as a tentative political form than as a human and socio-cultural reality. From the intertwining of its complex history with contemporary society, one can distill five important features which will perhaps give us some aids in understanding modern India.

The first feature to remember when thinking of India is its diversity. It is a country in which there are 15 official languages, over 300 minor languages and some 3,000 dialects. Twenty-four languages have more than one million speakers each. The largest spoken language is Hindi, but this is the mother tongue of only about 40 percent of the population. Often Indians cannot understand each other and frequently use English as a link or administrative language. But language is not the only diversity. There are four principal social groupings, what we sometimes call castes, and several thousand sub-categories of the castes. Although predominantly Hindu, all the world's major religions are represented in India. Ethnic differences also [abound]. This mosaic is culturally extraordinary. It is a source of divisiveness in a nation where particular loyalties have a deep meaning, both spiritually and physically. Given this diversity, it is remarkable that India has remained and grown, and continues to grow, as one nation.

A second feature is the depth of culture, which contrasts with the newness of the nation in its present form. There has been over 4,000 years of philosophical and cultural development in India, going back to early Aryan civilization. Since then, Hindu, Buddhist, Christian, Islamic, Sikh and other influences have left deep imprints on society. Every Indian, even the poorest illiterate, can tell stories of myth and history, a consciousness of a great civilizational heritage which is unusually widespread. Yet, there was no India as we know it until the achievement of independence in 1947. Before that there were various fragmented (some very large) territories. Many of these were absorbed into the British Indian Empire which mixed direct British rule with supervision of many areas ruled by traditional princes and local kings or maharajas. The modern state of India is only 34 years old and its development must be understood in the context of trying to impose a national framework on old cultural patterns. The consciousness of the great past and the newness of the present sometimes produces an abrasive reaction.

The third feature is that India is a land of minorities. About 80 percent of the population are Hindus. But Hinduism is an amalgam of pluralistic beliefs and forms, often containing conflicting elements. An additional 12 percent are Muslims, deeply aware of their Islamic faith. Hindu, Urdu, Bengali, Marathi, Tamil, Telegu, Punjabi and other languages create minorities of their own. Tribal and neo-aboriginal peoples number almost 40 million. No contestant for political office can be successful without an awareness of these constituencies. And this, in turn, conditions both domestic and foreign policy.

A fourth feature of modern India is that, broadly speaking, its future depends on the interaction between two worlds: the cities of India, where 20 percent of the population live, and rural India, where about 600,000 villages contain the rest of the population. Urban India is the India of modern industry, national politics and foreign policy, government planning, the national media, the major universities, business, the armed forces, science and technology. Its best products are frequently as good as the best in the world, its orientation is cosmopolitan. Rural India is the India of age-old patterns where tradition is the principal dynamic of society, where outsiders come and go but life continues, often without much change. When the two Indias mesh effectively, India is a success, as in the expansion of education, the reduction of illiteracy, the extension of the average lifespan, the introduction of some basic health care, the sustenance of a democratic political system. When they do not connect effectively, India is in trouble, as with population control and unemployment. For the nation to realize its considerable potential, the linkage between those two Indias has to be expanded and strengthened.

The fifth and final feature we must remember is that poverty, spirituality and modernity mix and coexist in India, without the paradoxical implications which a Western perspective suggests. It is the essence of Indian spirituality which enables even the most deprived to endure poverty and it is modernity which provides the prospect of improvement.

It is this spirit, a composite of many small individual visions and inspirations, which characterizes modern India and offers the best hope for the nation and its people.