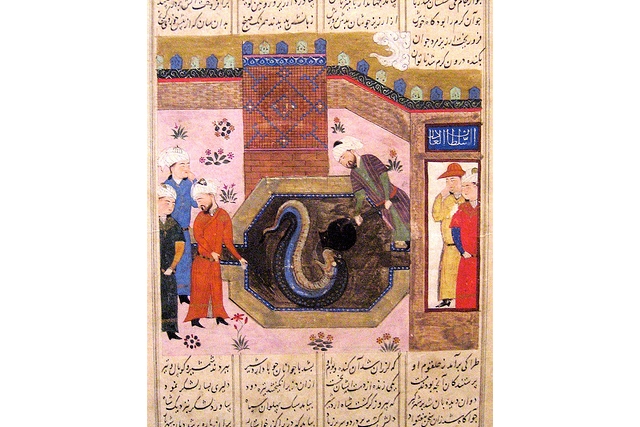 The Shahnama or Book of Kings is an epic poem written in 1010 and containing about 60,000 couplets. Its author was Abu Al-Qasim Firdausi. Unique and lavish renditions of this story have been created for several centuries Books were collected luxury items for the wealthy. Many rulers had manuscripts created in which their regime took on the heroic qualities of the characters in this epic. The Safavids were no different. The Shanameh of Shah Tahmasp was begun about 1522. It took many painters, calligraphers, illuminators, and their assistants to construct this beautiful book. The book demonstrates experimentation in style and influence from China as well as from Western Europe. The iconography in these books is not derived from one single source; each book creates its own iconography to depict the scene. The scene we will discuss is the day Faridun is restored to the throne after defeating the evil king, Zahhak. His mother celebrates the beginning of his kind rule. She has lavish gifts sent from her treasury. Other important figures follow her example. In this manuscript page we see all the grand gifts coming into Faridun's court.

Although the epic is centuries old, the Shhanameh of Shah Tahmasp is set in contemporary times. Thus we have the opportunity learn about Safavid court life by observing this illustration. We can also learn about the aesthetic and style of the art, another reflection on the court, which created this work. This illustration is rich in pattern, architecture, calligraphy, and color. In the upper left there is a yurt, a Central Asian tent structure. The intricate pattern on the roof of the yurt can be found on incised metal containers, some of which were captured as booty in campaigns against other Central Asian kingdoms. Patterns on the architecture can be found in ceramic tiles and Persian rugs. We can observe various luxury objects as well as horses and camels, both valuable animals. The clouds have the swirl and design seen in Chinese painting. The angel, who is dropping coins on Faridun, is wearing a Chinese style costume. A form of angels can be found in both Western and Eastern cultures. In India this type of figure is known as an apsara.

As we examine the faces of those present we realize that, except for the angels, they are all men. The men and women of court rarely met for social functions. Each sex held it's own lavish activates. The faces also reveal men from various cultures. Those with dark skin represent Indians. The rounded faces and short necks are characteristic of Turkmen. The dress is contemporary to the time, which produced lavish textiles. One of the most interesting aspects of this painting is the hat. It is these hats that put the court in an Islamic setting. These hats represent the Safavid devotion to 'Ali. It is said that the design for this turban came in a dream to an earlier Safavid ruler to be worn as proof of his devotion to Islam. The hat, or taj, developed into a head covering with twelve folds around a long thin extension. The twelve sections refer to the twelve imams of the Shiite belief. This pre Islamic tale now becomes Islamic and reflects on the current Shah all the glory of past pre Islamic times. This fusion of past and present works to legitimize a current rulers power.

The cypress trees represent strength and manliness. Notice how the artist has given a slight sway to the vegetation to create the sense of a breeze. The skewed perspective allows us to see the most important aspect of each object. This creates a sense of flattened space. The figures are out of scale to the architecture, but this is not important, as they work to create a whole and gripping composition within their setting. The asymmetry of the composition moves our eye at an angle to the Shah, giving us a sense of grand scale. The complete and full use of space is unique and part of what the Iranians create as they incorporate various foreign styles.

Calligraphy is incorporated within the picture plane. The writing itself is lyrical and sets a mood. The words are floated within squares and feel like banners being placed in front of the scene. This incorporation of text and image is also seen in Chinese and Japanese scroll paintings.

One of the most striking and important characteristics of manuscript painting from this time period is the color. The color is rich and bright, often using gold; it is bold and joyous. The intricate linear detail enhances this sense of something magical. Painters often used a brush with only one hair to create this amount of detail.

Students should discuss the use of color, brush stroke, circular movement and reiteration. All these elements, which give the image the power to convey the passion of the moment, are also cultural clues.