What Americans Don't Know About the World 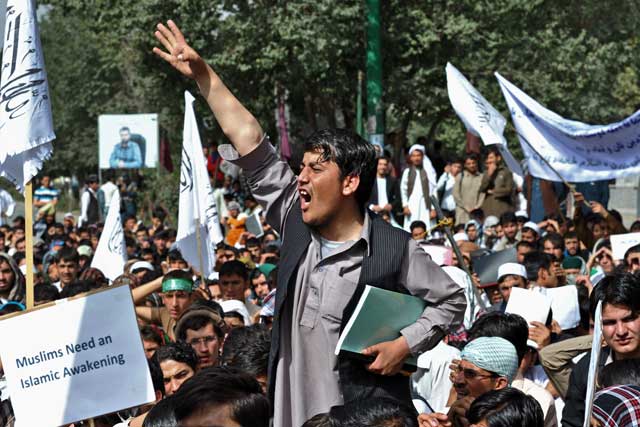 An Afghan youth shouts at an anti-U.S. protest in Kabul on Sept. 16, 2012, when students poured into the streets of Kabul to protest a film mocking Islam that has also sparked deadly riots in the Middle East and North Africa. (Massoud Hossaini/AFP/GettyImages)

Take a look at today's headlines. Libya. Afghanistan. China. Unfortunately, too many U.S. high school graduates lack even rudimentary knowledge about these places.

The non-profit organization World Savvy recently released new research on what American graduates know about the world. It reveals a troubling gap between important world events and trends, and what a rising generation does not know.

When you read the research, you’ll see that only about half of those polled can name Libya as a North African nation. Yes, the graduates were surveyed prior to the recent headlines, but after the uprisings against Muammar Gaddafi.

Only one in four college graduates could name where Afghanistan is, the site of America’s longest war. To put it in context, those polled were in elementary school at the time the World Trade Center in New York collapsed. And yet, they didn’t have the opportunity in their elementary, secondary, or higher education to get basic information, let alone think deeply about a nation that’s now intertwined with our own.

One can argue that facts, like geographic location, are less important to commit to memory in the age of Google. But a person cannot have a real understanding of foreign affairs and global systems without some rudimentary knowledge, for instance, about roots of conflict that emerge from geopolitics or ideological differences among peoples.

The World Savvy research also made known that 80 percent of American college graduates believe that workforce demands are increasingly more global, and 60 percent say that they would be better job candidates if they had a stronger understanding of world. Yet only 12 percent believe their education prepared them for this new world reality.

The demand for greater global competence and deeper learning about the world is clear. And yet the American school system struggles to provide this type of education to a rising generation.

The most promising approach to changing this is to make the need known. Students, parents, businesses, communities, national security, and every other stakeholder should identify education as a primary means to greater global competency, security, and stability. There needs to be greater curricular focus on integrating knowledge and skills that further understanding of the world and how it works. Find models that work for your communities. Demand that decisions and investments are aligned toward goals that include global competence.

Let’s take what we know about the world today and create opportunities for the next generation to make it better.