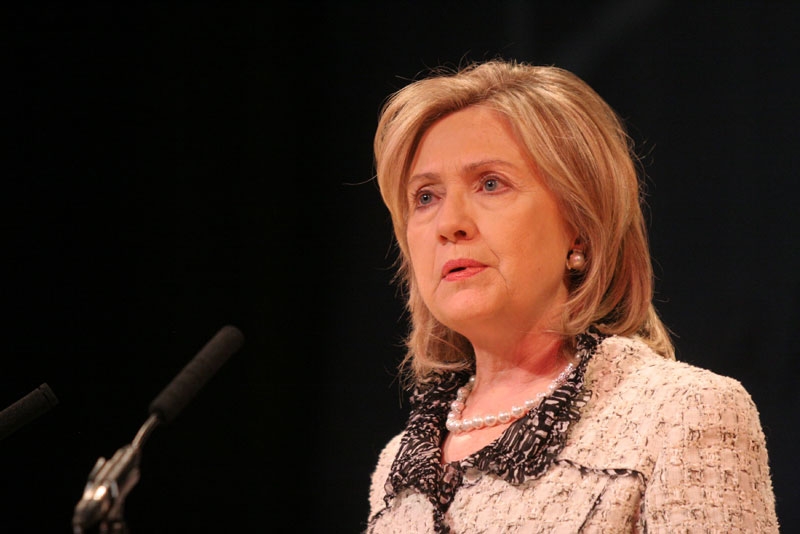 NEW YORK, February 18, 2011 - In a major policy speech on Afghanistan today, Secretary of State Hillary Rodham Clinton outlined a "clear choice" for the Taliban: reject al-Qaida and terrorism or "face the consequences."

"They cannot wait us out. They cannot defeat us. And they cannot escape this choice," she told a packed auditorium at Asia Society New York headquarters.

America’s top diplomat delivered her comprehensive and resolute warning in a speech that honored former Asia Society Chairman Richard C. Holbrooke, who passed away in December while serving as the Obama Administration’s Special Envoy to Afghanistan and Pakistan. At the time, he had been working hard to broker a solution for the war-torn region.

She warmly paid tribute to his peace-making legacy, saying he had been "an architect of our integrated military-civilian-diplomatic strategy.

"And, we feel his loss so keenly. But Richard left us a solid foundation."

She said: "Our friend Richard Holbrooke believed a better future is possible for Afghanistan, for Pakistan, and the wider region. He once observed, and I quote, 'In every war of this sort, there is always a window for people who want to come in from the cold ... If they are willing to accept the red lines and come in ... there has to be a place for them.' Those were his words. And, that is the policy of the United States."

Clinton also announced the appointment of Holbrooke's successor, Marc Grossman, a former career diplomat who has served in Pakistan and Turkey and one-time Undersecretary of State for Political Affairs.

Clinton was blunt in her assessment of the Taliban’s future and the challenge they face from the United States and its allies.

"In 2001, after 9/11, the Taliban chose to defy the international community and protect al-Qaida," Clinton said.

"That was the wrong choice, and they have paid a heavy price. Today, the escalating pressure of our military campaign is sharpening a similar decision for the Taliban: break ties with al-Qaida, give up your arms, and abide by the Afghan constitution and you can rejoin Afghan society.

"Refuse and you will continue to face the consequences of being tied to al-Qaida as an enemy of the international community."

Clinton pointed to US plans reduce troop numbers from July through to the end of 2014 so that Afghans can assume security operations their war-torn country. She said a surge in US-led NATO troops over the past year has been part of a strategy to "split the weakened Taliban off from al-Qaida and reconcile those who will renounce violence and accept the Afghan constitution."

She also stressed the need for political reconciliation, arguing that many individuals would leave Taliban ranks if offered ways to improve their lives.

"I know there are some on Capitol Hill and elsewhere who question whether we need anything more than guns, bombs and troops to achieve our goals in Afghanistan," Clinton said.

"As our commanders on the ground will be the first to say, that is a short-sighted and ultimately self-defeating view. We will never kill enough insurgents to end this war outright."

She said some gains were being accomplished a "at the village level" and that “the momentum of the Taliban insurgents has been blunted and in some places even reversed."

She called on the other major player in the conflict, neighboring Pakistan, to help even though it was "no secret that we have not always seen eye-to-eye."

"Pressure from the Pakistani side will help push the Taliban towards the negotiating table and away from al-Qaida," Clinton said.

Clinton also said corruption remained a major issue in Afghanistan and that there have been tensions with the government of President Hamid Karzai. "I will not sugarcoat the fact that the Afghan government has, at times, disagreed with our policies."

"Pakistanis are tired of terror and turmoil," she said. "Afghans have suffered through three decades of war. But the leaders of both nations, in and out of government, have not done enough to chart a different course."

She also suggested that women and ethnic groups in Afghanistan play strong roles in the reconciliation process.

"We believe the potential for sustainable peace will be subverted if women are silenced or marginalized," she said. "Afghan women made significant contributions to the Peace Jirga, they must continue to be a part of the High Peace Council, and they have an important role to play at the provincial and local levels if genuine reconciliation is going to take root."