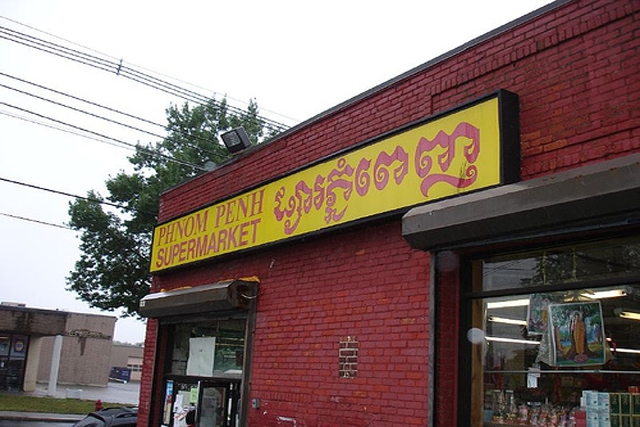 From the outside, the auditorium stood inconspicuously amidst other gray, concrete edifices on the school ground. Inside, the hall was bare except for a small stage and a few chairs lining the walls. As the students, most of them American-born Cambodians, sat down on the floor in their traditional sampot chong kben and proceeded, with disciplined regimentation, with the ritual salutation of the kru (teacher), it became apparent that the door into the building blocked out more than the external noise of suburban Virginia. It was a portal to a different world, to that moment when tradition and modernity, past and present, intersect. What were exhibited were not simply traditional dance routines, but the resiliency of a community striving to re-build andre-connect.

In fundamental ways, the refugee community is a legacy of Cambodia’s tortured past. As a result of a devastating revolution, renewed conflict and a decade-long foreign occupation, over one million Cambodians perished from starvation, disease, hard labor and execution; another million was dispersed, in search of refuge mostly in the West. In the US alone, over 130,00 refugees were resettled between 1975-1985. Since then, the community has grown to close to half a million. A new generation of Cambodians born outside of the ancestral homeland has come into being as the older, first generation refugees slowly fade from the scene.

Because of the circumstances of their migration, resettlement has not been easy for most refugee families. Dislocation resulting from political upheavals and flight has left deep and lasting scars. The challenges of re-building lives in an unfamiliar context further compound the trauma; for many families, economic survival remains the major preoccupation. Persisting constraints not withstanding, the community has exhibited tremendous resiliency. Despite the initial US policy of dispersing refugees, distinct communities were establishedand revitalized through secondary and tertiary migration. Over the last twenty-five years, major population concentrations have emerged in California, Massachusetts, Minnesota, and Washington State, followed byTexas and Florida, adding richness to the texture of America’s innercities and suburban neighborhoods. Communities such as Long Beach’s “little Phnom-Penh”, with its ethnic “mini mall” and noodle houses, have made a distinct and permanent mark on American culture and society.

In this developmental process, community-based assistance agencies, cultural and professional associations, as well as Khmer Buddhist temples and Christian churches have emerged as key institutions for the gathering and dissemination of critical information, pooling and sharing of scarce resources and delivery of critical services. In essential ways, they provide national and local leadership and help infuse structure to an otherwise potentially fluid community. Above all, these institutions serve as important loci for the articulationand re-affirmation of ethnic identity. Participation in community programs and functions has become a way for the diasporic community to come together and immerse themselves in the reconstituted world of familiar sights, sounds and smells, through the adornment of traditional dress, and in the partaking of traditional food, ceremonies, music and dance.

Especially for the younger generation of Cambodian-Americans, the opportunity to connect, or in some cases, re-connect with the community is meaningful in fundamental ways. For many, particularly the growing generation of American-born Cambodians, their memory of, and connection with, the ancestral homeland consist primarily of what has been nurtured within the family context, and reinforced within the community. Most attend schools and colleges where their own history and cultural traditions are not validated through the curriculum. In this context, after-school and weekend programs that have proliferated over the years in communities such as Greater Washington, Philadelphia, Lowell, Chicago, Minneapolis and Long Beach, not only serve to affirm acertain ethos for the community at large but are particularly important for instilling ethnic identity and pride, as well as a sense of continuity, in the younger generation. Above all, they foster linguistic and cultural competency that is critical for promoting inter-generational communication within the family and community. As such, these heritage programs are seen by the community as instrumental not only in helping to re-connect with the past but in fortifying the foundation for the future of the diasporic community. Emerging from a history of devastation and loss, this struggle to recollect andre-connect is, for many Cambodians, an integral part of the broader struggle to survive as a people, both in Cambodia and in diaspora.

In the early years of resettlement, community-initiated cultural preservation programs were largely based on music and dance repertoires retrieved from the collective memory of refugees, with instruments and costumes often adapted from materials available and accessible to the community. The process of cultural reproduction and preservation has been made easier since the early 1990s with increased communication and exchange between overseas Cambodian communities and Cambodia. Access to resources and expertise is now quite readily available through sustained, bi-directional exchanges. Artists and performers from Cambodia have become regular features of popular Cambodian restaurants in the US and are even becoming a main attraction in some non-Cambodianvenues, such as local casinos.
With increased visibility, hence interest, community initiatives for the preservation of the arts have also received greater support from funding institutions. While attention continues largely to be directed towards development in Cambodia, this momentum has also cast a new focus on Cambodian-American initiatives to preserve the arts in diaspora. With enhanced possibilities, various community programs have now acquired a transnational dimension. Where previously confined to resources available to the Cambodian American community, many now include some form of exchange with Cambodia. Various communities have been successful in recruiting dance and music teachers from Cambodia,and have, in turn, organized return visits for newly trained Cambodian American artists for short-term training in Phnom-Penh. Well-publicized programs such as the Khmer Arts Festival in Chicago and Washington D.C.as well as the annual Water Festival in Lowell, which invariably draws thousands of attendees, at test to the significance of these critical transnational links that have been forged and sustained.

On any given weekend, in places such as Long Beach and Lowell, it is not uncommon to see students seated in make-shift classrooms in the local temples or community centers, assiduously taking Khmer language lessons or practicing traditional dance and music. Elsewhere, in neighborhood markets, young Cambodian-Americans, peruse the stock of cross-border productions of videos and CDs, drawn to them by a certainin tangible but undeniable force. When asked to describe the appeal, a young Cambodian American reflected: “ I am not sure what it is. I don’t really understand the words. But there is something about the music, the sound. Outside I am American, but the music, it speaks to my Khmersoul.” At a nearby Buddhist wat, the sound of religious chantsco-mingles with the chaos and confusion of the inner city neighborhood.Here and elsewhere, a community struggles to reconstitute and claim its place in America’s pluralistic society, anchoring itself to that insistent call of tradition, seeking to drown out the cacophony of displacement and rupture.

No one understands in America
The stories my grandmother told me
when I was very, very young.
Nobody cares about the spirits of soil and water
Or even the Khmer, Laos, sacred dances.

The king of Angkor, Preah Kit Mealea, sees me dance
Between the pain of my world and the pleasure
of the spiritual world.
I am white, very white. I am invisible. Now I am serene.
See me dance and hear the spirits as they call.
Feel the tranquility inside the community life we called
neighborhood, they call ghetto.

No one understands these things in my new land.
No one cares about the light.
Only the darkness.