Why the World Should Help Mongolia Save Its Endangered Gobi Bear 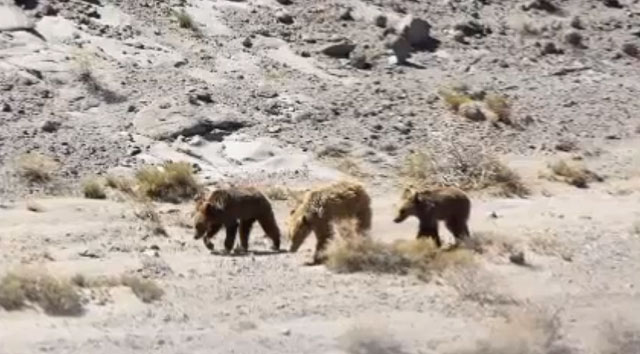 The Mongolian Gobi Bear, shown here in the wild, is one of the world's most endangered animal species. (Carlos Alperin/YouTube)

In late 2012 Mongolia's Ministry of Environment and Green Development designated 2013 as The Year of Protecting the Gobi Bear, a critically endangered native species whose extant population was most recently numbered at 22. Mongolia prohibited Gobi Bear hunting as far back as 1953, but more recently environmental degradation of its habitat has been cited as a major reason for its decline.

To address this issue, and to frame it in terms laymen around the world can understand, Asia Blog welcomes Damdin Tsogtbaatar, Mongolia's former Minister for Nature, Environment and Tourism and former State Secretary of Ministry of Foreign Affairs and Trade, to explain what's at stake in the survival of this extraordinary mammal.

The first impression one gets upon hearing about the Gobi Desert is one of endless, lifeless terrain sizzling with heat and buffetted by sandstorms. The reality is far from that, however. The Mongolian Gobi nurtures a few rare animals — like the wild Bactrian Camel, the Przewalski's Horse, the saiga antelope, and the snow leopard — whose populations range from the hundreds to only a few thousand. But judged by the risk of extinction, none of them matches the Gobi Bear (Ursus arctos gobiensis), which the locals call Mazaalai.

Mention of an endangered bear inevitably evokes thoughts of the cuddly panda first. Not many people would realize, however, that pandas outnumber the Mazaalai by something like 60 to 70 times. There are only 22 Mazaalais left in the whole world; nevertheless, a survey of "Top Ten Endangered Animals" lists on various international green websites doesn't turn up the Gobi Bear, although only a handful of the species that are listed (e.g., the Giant Galapagos Tortoise) could challenge the Mazaalai in terms of rarity.

Why, one may ask. First, the animal is understudied. The final genetic determination as to whether the bear is a species or a subspecies hasn't yet been reached. So far, analysis of its hair DNA suggests that the Mazaalai is related to the Himalayan Brown Bear (Ursus arctos isabellinus). Also, the concern voiced by 2.8 million Mongolians about their rare bear, unlike the concerns of the two billion about the panda, simply dissipates in a global chorus of seven billion.

We should remember that even if Gobi Bears are proven to be a subspecies of brown bear, none of the latter are fit to live in the Gobi. (No bear, regardless of its relation to the Mazaalai, can naturally adapt to the desert.) Hence, it should be protected regardless of whether it is a subspecies, for many subspecies (the Black and White Rhinoceros and Amur Leopard, for instance) are listed in the international top ten lists.

At the same time, many characteristics make them bears as well. Their morphology is similar — and they hibernate in winter, for instance.

In short, it took nature thousands of years of evolution to produce this wonder of the Gobi. If we put that extended time into a 24-hour time frame, then this animal, given its population drop and ever-worsening habitat, is arguably now facing the final seconds of its countdown to extinction.

It doesn't have to be that way, however. Relevant examples are right there in Mongolia. In the 1960s, when the Przewalski's horse went missing in Mongolia, only around 12 heads were left in European zoos. From that number we were able to breed the current number of the horses, whose wild population in Mongolia only exceeded 200.

Therefore, with respect to Mazaalai, I would say there's hope — if we care. This animal is the heritage of the whole of humanity — and therefore shouldn't be left to the mercy of only the Mongolian state budget, whose top priority, given the significant poverty in the country, lies in increasing people's incomes. Therefore, over the last 20 years the government rarely put aside per annum a conservation budget exceeding (in U.S. dollar terms) $5000.00. Only in 2005 did it allocate funds worth approximately US$140,000. However, the lack of adequate subsequent financing made those investments inefficient. Only this year is the government allocating roughly US$200,000, and the odds are that it can't maintain such a sum permanently.

Bearing this constraint in mind, the international green caucus, along with Mongolia, should join hands in saving the animal. Although some U.S. and Canadian bear research institutions have supported Mongolia, however, their means were not unlimited. And besides being a sustainable source of co-financing, the knowledge and expertise of the broader international scientific community is of great importance.

Concerted action now can reverse the Mazaalai's "final countdown" into a countdown to end the ignorance about it. Such a reversal would be a tribute to the thousands of (sub)species that went extinct because of us. Saving the Mazaalai will mean that we are not helplessly regretting the mistakes of our past or indifferently shrugging off the issue, but that we are learning from them and aspiring to become better, less destructive beings.

Damdin Tsogtbaatar is a former Minister for Nature, Environment and Tourism of Mongolia and a former State Secretary of Ministry of Foreign Affairs and Trade of Mongolia. He is an Asia 21 Fellow.