Why 'The Onion' Prank Isn't Funny 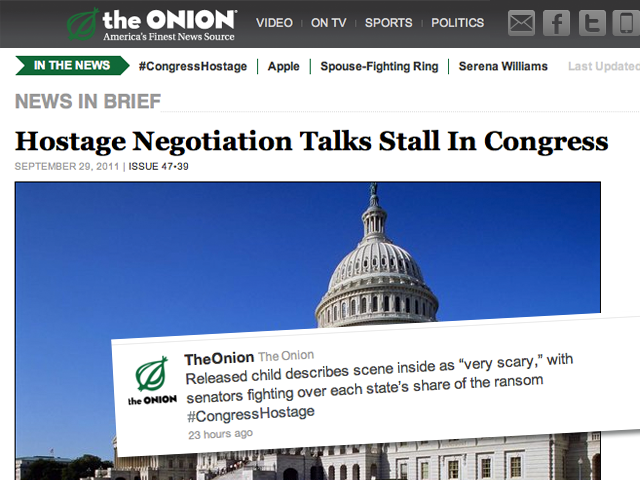 The tweetosphere was a-flutter late last week when the satirical news organization The Onion claimed children were being held hostage by a “group of armed Congressmen.” The Washington Post urged its readers to lighten up. The Capitol Police issued a statement that they can take a joke, but insisted, “this is not a very good joke.”

One reason it's not funny is because people realize it's metaphorically true.

Case in point: Congress has made severe funding cuts to, and in some cases, eliminated international education programs. In spring, the Fulbright-Hays grants were zeroed out, and Congress cut Title VI funding by nearly half. Last week, the Senate Appropriations Committee has recommended cutting the Foreign Language Assistance Program, which is the sole source of federal funding for K–12 language programs.

What does it mean? Chances are that young people learning languages like Urdu or Arabic, which our business and national security communities label critical-need languages, will no longer be able to do so. Universities reaching out to schools to provide teacher coursework on Central Asia, where America is engaged in our longest war, will likely have to cancel such programs. These are just two examples of many more programs throughout the nation that will cease.

These programs, which provide students with the international knowledge and skills they need, are important investments to our country’s prosperity and security.

The Onion’s fictional news story catalyzed great concern in the social media realm. The true news story of international education funding cuts should do the same. Here is one place to learn more and to organize.