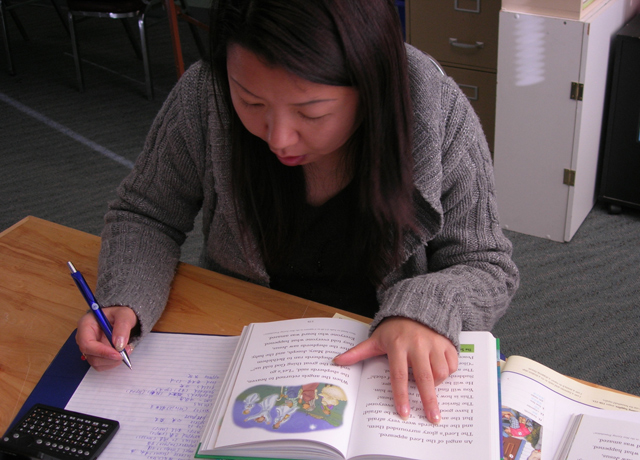 Parents regularly ask me if language immersion is right for their child. I almost unequivocally say yes — years of research show that immersion language programs give children a leg up academically, and this applies regardless of the socio-economic or ethnic background of a child. Students at "below average levels of academic ability" have been shown to succeed in immersion programs and will learn the second language better. Not to mention that speaking a second language is a distinct advantage when seeking a job and can result in higher pay. Of course, every child is different and there are circumstances where immersion may not be the best option.

Here are some of the common questions parents have about immersion and the answers I give:

Is it true that language immersion is better for their brains?

This is always the first question I get, and the answer is "yes." There are years of research showing that the brains of bilingual people have better executive function, which is what allows you to focus on problem solving, moving between tasks, and recalling words and information. All of these are keys to being successful in life.

Even though there is some recent disagreement about this benefit to brain development (it is a difficult subject to research and the trials and results are not always consistent), there are plenty of other advantages to learning a second language.

Will my child be confused?

Until relatively recently, especially among immigrants to the United States who speak a language other than English at home, there was a strong belief that learning two languages was dangerous and would lead to confusion in children. Numerous studies, however, have proven that this is not true. For instance, Jared Diamond, who has worked extensively in Papua New Guinea, shows that children there begin learning at least two languages from birth. Most people he knows there speak more than five languages — and don't confuse them.

However, as children are learning, and even if they study the same language for 12 years or more, they will mix up words. A word meant to come out in English will come out in the second language, and vice versa. But a new study by Judith F. Kroll, a Pennsylvania State Distinguished Professor in psychology, linguistics, and women's studies, posits that this mental struggle is good for the brain — the daily exercise of choosing between two languages actually makes the brain stronger and improves the executive function. Diamond hypothesizes that the daily skill these bilinguals are practicing is the solving of problems — specifically problems with rules that are confusing or constantly changing, or where misleading information is involved.

I do not want to discourage language learning at any age and depending on where you live, high school may be the only option to learn a second language. However, if given the opportunity, start your child young. While the concept of the "brain soaking up language the younger you are" is a very difficult one to research, an innovative new study shows that indeed, the younger children are, the better at learning a second language. It shows that there may be a time period where the brain is more sensitive to learning grammar and therefore, younger learners will master grammar rules that older learners will always struggle with. Additionally, as the study points out for younger learners, "the habits of pronunciation and grammar of their first language are less deeply ingrained and thus easier to overcome."

There are other reasons as well. Think back to your high school years and what your priorities were — was learning a second language one of them? Especially when you may have only studied it a couple of times a week for an hour at a time? I bet not. Meanwhile, my son, who began immersion at the age of two and a half, will tell you that he is Chinese because he speaks the language and will one day travel to China — he is fully invested! He also has the luxury of time that most high school students and adults don't have — it's a focus of half his day. And he isn't afraid to speak Chinese and make mistakes, a carefree attitude that older learners don't usually have.

There is also the fact that the more hours you spend learning a language, the higher your fluency will be. You can't make up for hours lost in your youth, but you can give those hours to your child through immersion.

Will they learn English as well as their peers who are not in immersion?

Yes! This is one of the most studied topics in immersion language learning. What the research consistently reveals is that students show a temporary lag in specific English skills, such as capitalization, punctuation, spelling, word knowledge, and word discrimination on standardized tests. But after approximately the fourth grade, they perform better than their monolingual peers on tests in English. There are no long-term consequences to their ability to speak or read English or to their literacy development. And for parents worried about the vocabulary of their bilingual learner, consider this: Their overall vocabulary is actually double that of a monolingual — they know the same word in English and their second language.

If you need further proof, new research from RAND compared 27,000 students over 10 years here in Portland. The headline of the study is that immersion students outperformed their non-immersion peers in English reading by seven months in fifth grade and nine months in eighth grade. That is basically a full school year ahead.

This study was particularly groundbreaking because the students here are assigned to the programs by lottery, meaning that this was one of the first randomized trials representing students from all different ethnic and socio-economic backgrounds. It also showed that English Language Learner (ELL) students enrolled in these immersion programs were less likely to be an ELL by the sixth grade.

Will they also do better in math and science?

The RAND study did not show benefits for math and science, but also showed no detriment. In fact, for the Japanese, Russian, and Chinese programs, there may be "modest benefits." Other studies of students in French immersion programs in Canada have shown some superior levels of achievement in these subject areas on standardized tests. So we can't say yes, but we can't say no, either.

I won't be able to help them with their homework!

This is a very practical concern of parents and one that comes up repeatedly. Teachers are aware that parents are not able to provide the assistance at home that they would if their child were learning in the home language. Therefore, many immersion schools offer afterschool homework help. Local afterschool programs may also offer this kind of assistance. My son's school set up a closed Facebook group for the parents in our class. There are often homework questions posed and answered there. Students can also find a peer to be their homework buddy.

I'm convinced—but there is no immersion program in my school district.

If you are motivated and energetic, you can work with your school board and school to start an immersion program. Asia Society offers free handbooks to help you — they are targeted for starting a Chinese immersion program, but the information can just as easily apply to other languages.

If starting your own program is too daunting a task (I don't blame you!) or not possible given budgetary or political constraints, look for classes offered by local heritage groups. They often provide language classes in the evenings or on the weekends. Start by searching the Heritage Program Directory. This listing may not be complete given the constant change in offerings — so don't despair if this doesn't yield results, do another, broader online search for your community. Local universities or community colleges may also have some offerings for students. For instance, Confucius Institutes around the country offer Chinese classes.

And don't forget about language camps in the summer. Searching the Startalk site — a federally funded program with offerings across the country in multiple languages — is a good starting place.

Private companies/tutors like Language Stars in the DC and Chicago area offer weekday classes for young children and weekend classes for school-age children. Companies like Berlitz have multiple locations and private tutors are also available in most areas. There may also be a private school near you that offers immersion.

If all else fails, turn to technology! There are online classes (again, for Chinese, Confucius Institutes offer online courses). Search Coursera or university websites — for instance, a quick search brought up a free online French course from Carnegie Mellon. Try to find one that offers the ability to speak directly with a native speaker to ensure proper pronunciation. Or combine online courses with a weekly session on a site like WeSpeke that matches language learners around the world together for free. Check your local library, many offer free access to language learning software. For parents who want to explore a language alongside their children, try Duolingo (I use it to brush up on my Spanish).

Immersion: the benefits are many, the arguments against it are few. It strengthens the brain, improves understanding of native language, and gives students an advantage later in life when looking for a job.

Heather Singmaster is director for CTE and GCEN at the Center for Global Education at Asia Society. Her work focuses on education policy and international best practices.