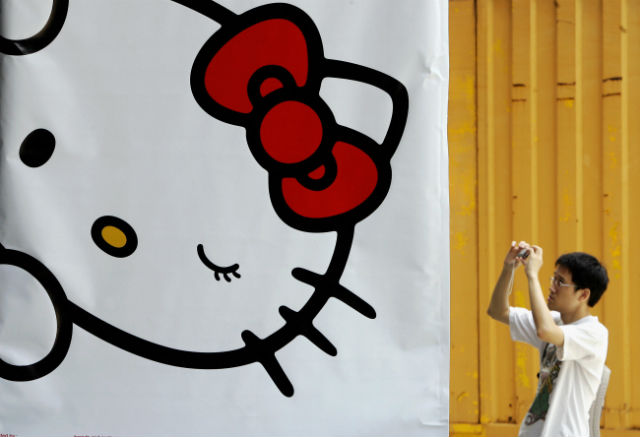 A man takes a picture next to a banner set up for an exhibition for popular animation character Hello Kitty in Hong Kong, 29 August 2005. (Phillipe Lopez/AFP/Getty Images)

Hello Kitty is an obsession in Hong Kong, where there is even a Hello Kitty organic farm. Now, Hong Kongers can also dine at the world’s first Hello Kitty-inspired restaurant: “The pink-bowed fur ball is emblazoned on Chinese restaurant mirrors, faux wood screens, teapots and chopstick holders, while pictures of her as the Four Beauties of ancient China adorn the walls.”

In Pakistan, a new generation of schoolchildren is “establishing the country as a Scrabble powerhouse,” writes Saba Imtiaz in The Guardian. In Karachi alone, there are over 20 Scrabble clubs, and a Pakistani player won the World Youth Scrabble Championship in 2013.

Why is Monet in Iran?
Alexander Sehmer | The Independent

Across the city of Tehran, billboards featuring the artwork of Monet, Rembrandt, van Gogh, and others were on display this past week. They were part of ‘An Art Gallery the Size of the City,’ a 10-day exhibition initiated by Tehran mayor Mohammad Bagher Qalibaf. The exhibition has received a mixed response from Iranians.

Tens of thousands of Rohingya, an ethnic Muslim minority group from Myanmar, have fled the country in the last several years due to ethnic persecution, with many recent migrants fleeing by boat to Malaysia and Indonesia. Recently, however, both Malaysian and Indonesian governments have declared their intention to turn away any more migrants, leaving thousands adrift at sea. “What we have now is a game of maritime Ping-Pong,” said Joe Lowry, a spokesman for the International Organization for Migration.

Recovery efforts following Nepal’s recent earthquake have been hampered by the inaccessibility and dangerous conditions of many of the most affected areas. This was further complicated by a major 7.3 earthquake aftershock earlier this week. Donatella Lorch reports on how an “informal, chaotic and yet highly successful volunteer workforce of Nepalis … has stepped into the void” that exists due to the barriers for aid groups.

NBA player Jeremy Lin uploaded an original Chinese rap video to his Facebook page titled “I heard you don’t believe I can speak Mandarin.” His mother makes a cameo appearance.

“Korea has a long history in performing traditional magic. It was well evidenced by an old album published by a neighboring country 1 500 years ago. According to historical data, the magic developed to a higher level in the period of Koryo Kingdom (918-1392), the first unified state of the Korean nation. Typical of the magic pieces were the magic with fire and the one with knife. Today magic has made a big stride forward in the Democratic People's Republic of Korea.”

$341 million – The current amount of funding for the “Cool Japan” campaign, funded by the Japanese government to promote the country’s cultural capital [CNBC]

25,000 – The estimated number of Bangladeshis and Rohingya Muslims from Myanmar who have boarded smugglers’ boats in the first three months of 2015 [Reuters]