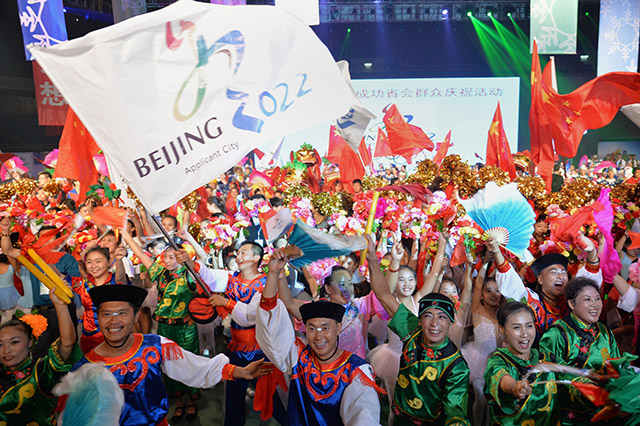 Chinese people wearing traditional costumes gather to celebrate as Beijing is announced as the host city for the 2022 Winter Olympic Games, in Shijiazhuang, the capital of northern China's Hebei province on July 31, 2015. (STR/AFP/Getty Images)

Beijing became the first city to host both the Summer and Winter Olympic Games after the International Olympic Committee selected the Chinese capital over Almaty, Kazakhstan in a meeting last week. This selection is notable given the general lack of snow in Beijing, China’s “lack of tradition” in winter sports, and the country’s political climate and human rights record.

The nation of Sri Lanka recently signed a contract to become the world’s first country with complete, nationwide 3G coverage. This will be made possible through Project Loon, Google’s balloon-based Internet network, and will involve 13 balloons “floating 12 miles above the Earth, and beaming down connections to every town and village.”

Get a sneak preview of Shanghai Disneyland, which will become the largest theme park in China when it opens in the spring of 2016. Spoiler alert: Pirates of the Caribbean and Toy Story will be represented in the theme park’s attractions.

Watch a time lapse video showing the sun rising over Hiroshima on Thursday, which marked the 70th anniversary of the dropping of the atomic bomb on the Japanese city.

"President Obama and other policymakers, please come to the A-bombed cities, hear the hibakusha (surviving victims) with your own ears, and encounter the reality of the atomic bombings."