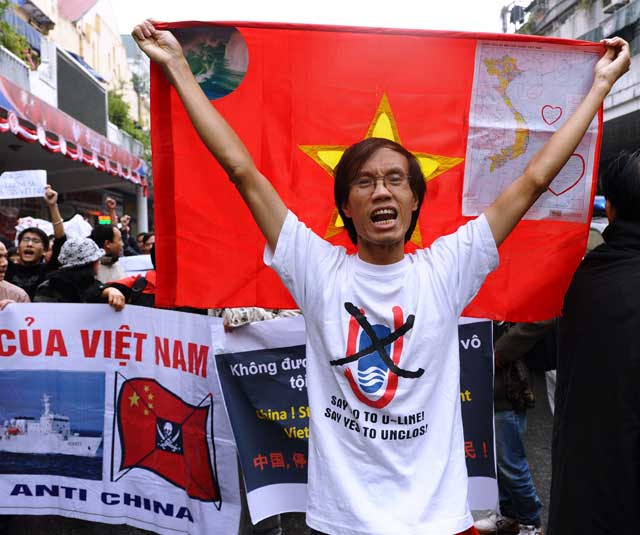 Amid heightened territorial tensions over the South China Sea, protestors shout anti-China slogans and hold banners as they march towards the Chinese embassy in downtown Hanoi on Dec. 9, 2012. (Hoang Dinh Nam/AFP/Getty Images)

The territorial claims in the South China Sea area remain like a bowl of noodles — crisscrossed, overlapping, and so intertwined that it is challenging to pinpoint a beginning and an end. Unraveling this web presents one of the most challenging international relations dilemmas of our present time and only a comprehensive approach is likely to get to the bottom of the bowl.

Recognizing that taking a holistic view is imperative for resolving this matter, Asia Society is convening leading academics and policy makers from all of these sectors. From Australia, to Beijing, to Washington, D.C., some of the leading authorities on the South China Sea dispute will spend two days in New York searching for a way forward.

The conference, co-organized with the Center on Asia and Globalization at the Lee Kuan Yew School of Public Policy in Singapore, recognizes that the endgame for states involved needn't be feast or famine. An equitable solution can be devised, but a multi-pronged approach is required.

The fact is this: with Asia's rapidly rising middle classes, and shifts toward domestic consumption, resources are quickly drying up. At the same time, Asian economies, like those around the world, are increasingly linked together and threatened by global recession. It is imperative that economic and political solutions — using diplomatic, legal, and, occasionally, military channels — are utilized, in order to exercise enforcement.

As a McKinsey report mentioned in 2011, "in the past ten years, demand from emerging markets, particularly in Asia, has erased all the price declines of the previous century." Globally, "Up to three billion people could join the middle class, boosting demand at a time when obtaining new resources could become more difficult and costly," leading to "environmental deterioration."

Those warnings are no less stark today, as they were two years ago, particularly in Asia. We can only work toward solutions if the challenges are clearly identified.

The first challenge is in terms of law. China has been unwilling to discuss the issue through any legal apparatus, since, they argue, nearly the entirety of the sea belongs to them.

This was recently evidenced in China's refusal to honor the Philippines' request for arbitration of the dispute with the UN Convention on the Law of the Seas. While China is party to UNCLOS, it rejected the Philippines request to bring the dispute to arbitration, stating that it "contains many grave errors both in fact and in law, and includes many false accusations against China."

At the regional level, there exists the ASEAN Declaration on the Conduct of Parties in the South China Sea. But negotiations toward a full-fledged Code of Conduct — a step beyond the current "declaration" — have been hampered by China's economic and political influence on several of the ASEAN states. This manifested itself last July when ASEAN failed to issue a joint communiqué at its annual regional upon the insistence of Cambodia that any mention of the South China Sea conflict be left out.

Cambodia's stubbornness on this matter, are linked to the second challenge: economics.

Overall Imports and exports between China and ASEAN grew in double digit percentage points over the 2010-2012 period.

But the cozy relationship between China and three ASEAN states in particular, is threatening to the regional trade bloc’s stability. The first, Myanmar, has received $14 billion in foreign direct investment from China since 1989, and China remains its second-largest export partner. Cambodia has received nearly $6 billion in foreign direct investment since 1994, and Laos, although receiving more FDI from Viet Nam and Thailand, receives considerable support from China for its infrastructure. Laos in particular has been caught up in an ASEAN-China "tug-of-war."

For the most vociferous South China Sea claimants, Viet Nam and the Philippines, economic relations seem to be less of an impediment to sharp rhetoric directed at their northern neighbor. China is Viet Nam's largest trading partner, and the Philippines' third largest.

While trade provides an incentive for keeping relations cordial, ultimately economic degradation would be devastating not only for Asia, but for the international community that sees Asia as one of the few economic bright spots.

The third challenge is on the political front. Regional and global rules and norms provide a legal structure for relations between Southeast Asia and China, but domestic political pressures can cause additional strain. This is particularly true in an era of weakening economies and young democracies, with institutions that are not fully developed. Once-successful, iron-fisted, top-down leadership — a hallmark of success in the region — is no longer the soup du jour, and civil societies are testing the capacity of leadership to adapt.

Internationally, political relations are similarly complex. The shared histories of the Communist Parties of China and Viet Nam — in spite of centuries of mistrust — provide a foundational level of allegiance, even if the relationship is less positive behind closed doors. ASEAN countries further to the south, including Brunei which chairs ASEAN this year, Malaysia — which has stressed that "ASEAN must show its united voice" — and Indonesia, Southeast Asia's largest economy, have all been more tempered in their approach to the issue.

The final challenge comes on the defense side. China's defense spending is increasing rapidly, while the U.S.'s is being curtailed. Although the capacities of both militaries are still vastly different, the South China Sea is viewed by China as sovereign territory. In other words, China is staying put and has a strong imperative to defend its — albeit disputed — sovereignty.

All of this leads to a final conclusion. International law, rules, and norms will be manipulated by those states that have the military, as well economic, might to do so. For this reason, we need to examine most closely how China and the U.S. can act as responsible parties in this.

After the conference, I am unsure whether I will be more or less optimistic about resolution. But some of the best minds will be collaborating on this issue, and that's reason to see the glass half full.