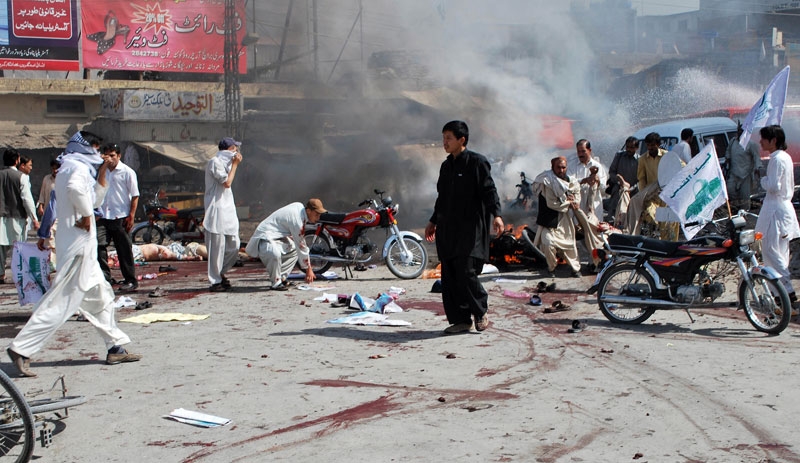 On September 1, 2010, at least 35 Shiite Muslims were killed and 160 others injured in a suicide bombing during a procession in Pakistan's cultural capital, Lahore. Two days later, 55 Shiites were killed at a rally designed to call for solidarity with Palestinians in the western city of Quetta, followed by another suicide bombing at a mosque killing a member of the Ahmadi sect in the northwestern city of Mardan. Bloomberg reported that this series of killings has been the latest rounds of sectarian violence out of Pakistan, taking place over the span of a week carried out by the Pakistani Taliban movement.

When the military government of General Zia-ul-Haq came into power during the 1980s, Sunni hardliners' violence slowly mounted, as they targeted minorities such as Shiites, Ahmadis, Christians, Hindus, and mystical Sufis. In that decade, Zia secretly promoted the growth of Sipah-e-Sahaba, a Sunni guerilla movement, and its allies, according to Hassan Abbas, Asia Society Bernard Schwartz Fellow.

In an interview with the BBC's Newshour, Abbas explained that the Pakistani Taliban's attacks on Shiites would not weaken their campaign against the army or Nato. "The reason is that the militant groups related to Al-Qaeda or the Taliban, their attacks against sectarian groups...are all different layers of the same strategy."

Amid heavy flooding causing destruction on a mass scale, Pakistan has suffered billions of dollars worth of damage, also rumored to have diminishing the power of Pakistan's Taliban.

"The Taliban have been impacted by (the flooding)," Abbas said. "In some cases, the Punjabi militants have been reported to have been leaving their weapons behind and escaping the floods. In Swat Valley, everything has been destroyed, but in the tribal belts, militants have not been affected because of the mountainous region."

However, there has not been much backlash from Shiites and other majorities.

"There has been violence from the Shia side in the form of protests on the streets like burning government buildings," Abbas said, "but there has been no coordinated militancy."

Listen to Hassan Abbas speaking with the BBC's Owen Bennett Jones below: