'Paradigm Shift' or 'Nothing Burger'? Asia Society Reacts to the Trump/Kim Summit 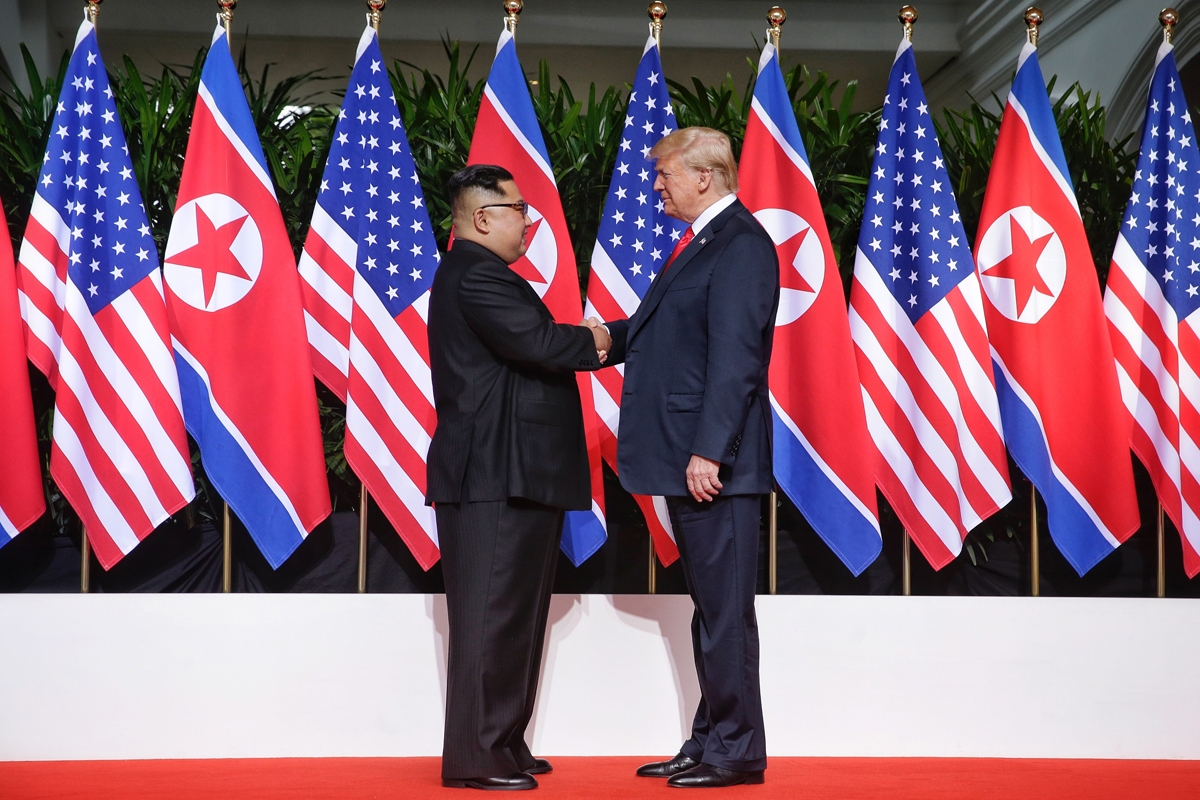 On Wednesday, June 13, Daniel Russel and Wendy Sherman will discuss the implications of Donald Trump/Kim Jong Un summit in Singapore. The program will be available via live webcast at 8:30 a.m. New York time.Learn more

Tuesday's summit meeting between U.S. President Donald Trump and North Korean leader Kim Jong Un, easily the most-anticipated geopolitical event of 2018, is now over. The New York Times has a thorough rundown of what did (and didn't) happen in Singapore, and here's a link to the joint communique signed by the two men.

For a gathering that lasted all of four hours, the Trump/Kim summit is certain to inspire months of commentary, criticisms, and questions, as experts and laypeople alike make sense the meeting's implications. A good place to start will be tomorrow morning, when Daniel Russel and Wendy Sherman, two of the world's preeminent experts on the North Korea nuclear problem, offer their perspectives at Asia Society. Don't miss our free live webcast starting at 8:30 a.m. New York time.

But first, here are some quick takeaways from the summit from the Asia Society family. We'll update this page in the hours and days to come.

In an appearance with ABC 7:30, Asia Society Policy Institute President Kevin Rudd said that "there's still a lot of work to be done, but frankly, I'd give [the summit] a pass mark in terms of what the expectations were before the event."

The summit marks a paradigm shift. Whether it's permanent, only the negotiations in the next round will tell. I believe we should always be skeptical, but we should never allow our skepticism to suffocate the possibility of new progress. President Trump's style is not orthodox, but then again Trump has never claimed to be a graduate of the Georgetown School of International Diplomacy. He's Trump. So what we've got is two leaders meeting, deciding to shift the paradigm, and begin a process to see if the nuts and bolts can be worked out.

Echoing Rudd, John Delury, a senior fellow at Asia Society's Center on U.S.-China Relations and professor at Yonsei University, told NPR that the meeting marked a "paradigm shift from a hostile relationship with North Korea to a friendlier one." He described Kim Jong Un as a leader capable of transforming his country's international status.

If you situate him in the context of North Korean history and see what he's done domestically and now, in the last six months, what he's done internationally, is that he does represent something new from his country — very different from what his father did. That's the significance of him being in Singapore. He's ready to let the gates down that have kept North Korea isolated, and he seeks to change that. Kim is finding ways to counterbalance, but carefully, China's overweening influence on North Korea's economy and diplomatic position. It's a delicate dance, but he's quite sophisticated. He's not trying to defect to the American side, he's rebalancing. The world is [now] safer.

Delury told CNN that the United States "has been so locked into this concept thinking about North Koreans in hostile terms that [it has] trained [itself] not to think in terms of opportunity."

Daniel Russel, vice president of international security and diplomacy at the Asia Society Policy Institute, was more skeptical. In Foreign Affairs, Russel, who served as President Barack Obama's point person on Asia at the U.S. State Department, wrote that "it's yet to be determined whether he made a historic breakthrough or a historic blunder" and that the summit "capped off an astonishingly successful spring" for Kim Jong Un.

Trump’s gambit at the summit seems to have played to Kim’s advantage in other important respects, as well. North Korea has succeeded beyond its wildest dreams in shutting down defensive (but “expensive,” as Trump described them) U.S.–South Korean joint military exercises. While Trump considers them expensive, North Korea refers to them as “provocative war games.” Trump gave up this card without even asking for a corresponding halt of North Korean conventional exercises, let alone a complete stop to its nuclear and missile programs. A long-standing goal for the Kim regime has been to enmesh the United States in negotiations over a peace treaty, partly to push for the end of the U.S.–South Korean alliance and U.S. Forces Korea, in Seoul. But it’s unclear if Kim even needs a peace treaty in light of Trump’s emphatic desire to “get our soldiers out.” One wonders which leader is more motivated to move U.S. troops off the Korean Peninsula—Kim or Trump? Kim also cannot have missed the confused scramble in the wake of the summit by both South Korea’s Blue House and U.S. Forces Korea to find out what Trump had promised, indicating an astounding gap in U.S. coordination.

Russel was also skeptical that Trump's accomplishment — simply meeting Kim at all — was really much to boast about.

"Trading our defense of South Korea for a promise is a lopsided deal that past presidents could have made but passed on," he told Reuters. And, regarding the thin concessions the American president wrought from Kim, Russel quipped to the Los Angeles Times:

"Not only did Trump buy the same horse again, he paid retail."

Lindsey Ford, director of Asian Security at the Asia Society Policy Institute, was similarly bearish about the concrete achievements of the summit. She wrote on Twitter:

I worry about what this outcome means for the viability of the administration's Free Open Indo-Pacific strategy. On the one hand, decreased tensions with the DPRK are positive and in theory, should free up bandwidth to focus on other priorities. In practice though, kicking this nothing-burger over to [Secretary of State Mike] Pompeo and tasking him with turning it into a something-burger means that DPRK negotiations will continue to eat up a lot of leadership bandwidth.

Ford later told MSNBC that North Korea's ability to extract concessions from the United States means "sometimes the reality in international relations is that behaving badly gets you more attention than playing nice." Watch her full appearance:

On CNN, Ford said that she recognizes that "there's something to be said for personal diplomacy. On the other hand, we can't forget, this is the same man whose regime sent Otto Warmbier home in a medically-induced coma. This is the same man who assassinated, allegedly, his half-brother in a public airport. I think we've handed him a propaganda coup in this whole situation.

In other words, the North Korean nuclear issue, and indeed the entire debate over the North, has become far too Americanized. It is one of the oddities of Northeast Asian diplomacy that the U.S. government has taken ownership of an issue more than 5,000 miles from its mainland when regional players with far greater “skin in the game” should be playing a much larger role in the process.

Here's Stone Fish on the summit:

So we are buying the same horse three times. Unless a lot more comes out, Trump way way oversold this. https://t.co/mwU00lFDKr