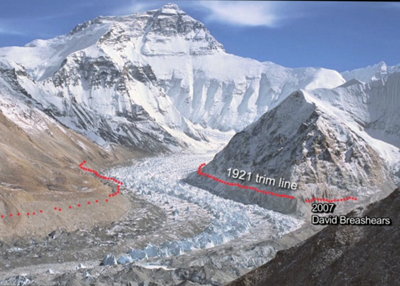 Over the last several decades, the Himalayan glaciers have receded dramatically. Where once mighty rivers of ice etched the peaks, mere creeks of cloudy water now flow. Rising global temperatures, exacerbated in the Himalaya's fragile climate, are melting the glaciers—putting people, crops, and animals at risk.

It is difficult to underestimate the crisis brewing downstream of the glaciers. "Glaciers feed in Asia almost every major river system," says Orville Schell, Director of Asia Society's Center on US-China Relations. "Around those rivers all the great civilizations have arisen, and today they still depend on those waters. That’s some 2 billion people."

The Center's China Green project has been tracking the disturbing developments and recently launched a video which summarizes the findings. Click to watch The Melt and learn more about this important issue.