Kyrgyzstan's Otunbayeva: We Fought for Minds and Hearts 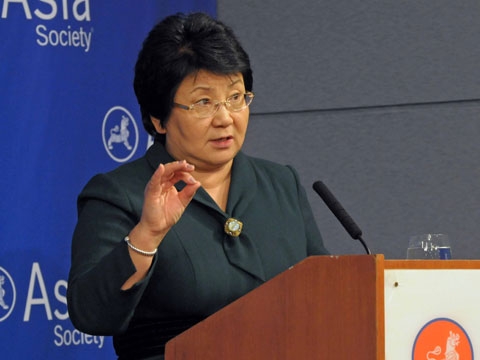 NEW YORK, November 22, 2011 — In an impassioned speech, Roza Otunbayeva, the outgoing President of the Kyrgyz Republic and the first female leader in Central Asia, spoke at the Asia Society about the impending democratic transition in the former Soviet nation, which will include the state's first peaceful transition of power and a national referendum ratifying a new constitution. The event was moderated by Reuters Senior Correspondent and former Asia Society Bernard Schwartz Fellow Philip Shishkin.

Since its independence from the former Soviet Union in 1991, Kyrgyzstan has endured some "difficult, turbulent years," according to Otunbayeva. For instance, escalating outrage over tyranny and rampant levels of corruption have spurred two revolutions — the 2005 Tulip revolution and the 2010 April 7 revolution — which resulted in widespread violence and the ouster of two presidents.

Otunbayeva, who took over as interim president after the April 2010 revolution, helped move the country away from its former authoritarian rule and fashioned the region's first parliamentary democracy. Under her political leadership, the country drafted a new constitution that established a parliamentary system of governance and introduced fair elections, which could set a democratic precedent for the region. These democracy-building initiatives, including promoting an active civil society and open media, are implemented under the aim of achieving a more "inclusive political process."

Otunbayeva maintained that while the transitional period is over, further reforms are needed. Some of the acute issues that they need to work on include improving the highly inadequate legal and judicial systems and institutions, promoting the rule of law and good governance, and strengthening transparency and anti-corruption measures in business, especially in the mining and energy sector.

In her closing remarks, Otunbayeva reminded members of the audience that these reforms will take time, and in spite of the imminent expiration of her term, she will continue to fight alongside her country in this uphill battle "until the end."