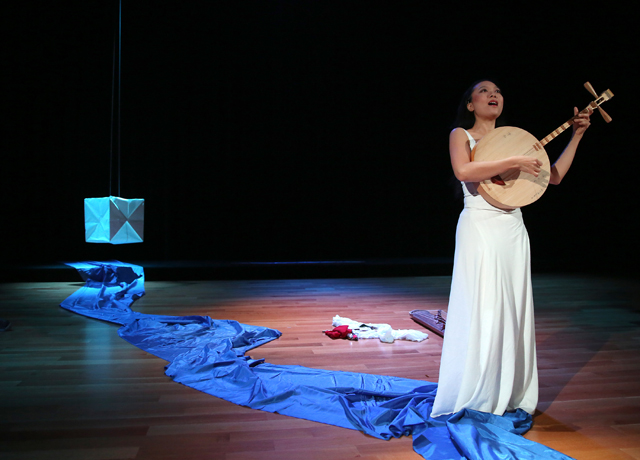 The multi-instrumentalist Jen Shyu has emerged as one of the world's most heralded musical performers, blending traditional Taiwanese music with contemporary folk creations that she has written herself. Shyu, who has released six albums and performed around the world, will debut new songs and recite poetry at Asia Society Texas on November 6. In a recent interview with Asia Blog, Shyu described her unique upbringing, her musical education, and why traditional Taiwanese music appealed so much to her.

Your parents are from Taiwan and East Timor, two very different Asian countries. How did this affect your upbringing?

As a child growing up in the Midwestern U.S. and perceived as simply “Chinese,” my focus then, like many second generation children, was on how to assimilate and adjust to the racial prejudice I received in Dunlap, Illinois, the rural town north of Peoria where we lived. There were only a handful of Asian and African-American kids, so I became aware of racism in those years. Fortunately, a number of arts organizations in Peoria welcomed me with open arms. That — and a fantastic choir teacher — nurtured my love of performing.

My brother and I went to Chinese school on Sundays, but I was so busy with music lessons and competitions that most of my time was spent practicing or performing. My parents did take us to Taiwan when I was about seven years old, which was important because I got to meet my grandfather on my father’s side for the first, and only, time. I distinctly remember him reading my hand and giving me a big Buddha-like smile. I also remember meeting my dad’s mother, who had actually cared for me as a baby, but I was too young to remember her at that time.

We didn’t get to go to East Timor back then, as my mom felt it was still unsafe in the 1980’s and 90’s. But I got to hear stories from my parents about both Taiwan and East Timor and have since been fortunate enough to spend a lot of time in both places.

What drew you to studying folk music in Taiwan?

I didn’t fully appreciate or even become curious about the cultural backgrounds of my parents until I entered the world of jazz and started improvising, composing, and arranging music to some Taiwanese folk songs that my father had given me in sheet music form. Growing up, I really only had exposure to Western classical music, and ended up majoring in opera at Stanford University. Only later, when I dove into the world of jazz and encountered Asian-American jazz musicians like Francis Wong and Jon Jang, did I become interested in my own ancestry. When I moved to San Francisco and started working with Francis and Jon and meeting other artists in that scene who drew from their ancestry for inspiration, I dug out those old Taiwanese folk songs and started to explore them. It was a real liberation. I realized that I was embarking on a new path, using all the tools I had learned to begin to make the music that I wanted to make.

When I started making these Taiwanese folk song arrangements, I decided that I wanted to meet all of my Dad’s relatives and gain real experience in Taiwan. I told Francis about my desire to go to there and investigate the origins of the folk songs, and also find more of the amazing indigenous music of Taiwan that I had encountered while browsing through used CDs at Amoeba [Records} in San Francisco. Francis agreed that I should just “hang out” there for a while. I also met the pioneering saxophonist and recent MacArthur Genius Awardee Steve Coleman around this time, and he urged me to follow my instincts to go there as soon as possible. So a couple of months later in 2003, I quit my job in San Francisco and spent two months in Taiwan without any help from a grant. The trip inspired me move to New York, where I began to sing with Steve's band and start my own band called Jade Tongue. All the while I went back to Taiwan frequently to study Mandarin and to go deeper into the traditional music there. The musicians I met and my teachers in Taiwan were touched that an American would be interested in learning their songs, as young Taiwanese are generally only interested in pop music.

Your music spans a wide variety of styles and cultural origins. How did you resist the temptation to focus on one particular genre?

Since I was little, I felt that focusing on just one thing failed to express what I wanted to express. Perhaps because of the racism I faced as a child, I have always wanted to show people something that was different than what they assumed, and always wanted to unite people through bridging seemingly contradictory elements and tensions. As a result I love bringing multiple languages, disciplines, and traditions into one performance, relating things to one another in unexpected ways. I love it when people tell me afterwards that they had never before seen anything like what I did, and that they loved it but couldn’t even explain why. I am seeking transformation for all us in the room at the moment of performance, and putting together these elements is how I prefer to do it.

In your upcoming performance, you will perform music inspired by the late Taiwanese folk singer Chen Da and the late Taiwnese poet Edward Teh-Chang Cheng, both of whom you list as recent influences. How exactly have they influenced you?

My cousin in Taiwan, nicknamed “Acid” because of her love of acid rock, was the first person who told me about Chen Da. She told me about his life as a partially blind street musician and an icon of Taiwanese independence. I was already fascinated by his story, but when I first heard a recording of his voice and Taiwanese moon lute playing, I was enthralled. I fell in love with his music immediately. He was a genius to me, a true virtuoso, a natural master of improvisation, full of the universal essence of “the blues,” but making music that is uniquely Taiwanese.

Edward Teh-Chang Cheng was the father of my good friend from Stanford, photographer and entrepreneur Eric Cheng. Edward was the reason why I started performing solo, as he had invited me in 2006 to perform a concert featuring my arrangements of Taiwanese folk songs at the San Diego Taiwanese American Center. Before that time, I only had performed with my band or in other people’s bands. It was after that concert that I found out he loved writing poetry, so over the years, we exchanged some writings, and he inspired me to write some poems as well. When I went again to Taiwan in 2007, he helped me meet nearly everyone involved in Hengchun’s folk music community, an experience that was instrumental in helping me learn and eventually write my music in my own tunings on the moon lute.

When I heard from Edward in April of 2013 that he was diagnosed with cancer, I was in Indonesia. I was shocked. He sent me poems before and after a surgery that he had undergone, and one that he sent me, called “Thoughts of Light and Freedom” really struck me. I recorded it on my latest album Sounds and Cries of the World, with my favorite lines from the poem being: “I look at you, you look at me / how to deal with emotions building these millions of years.”

What was unique about the creative process for your latest album, Sounds and Cries of the World?

The seeds of this album were planted during those years learning Taiwanese folk and indigenous music, because it was through those songs that I learned about the essence of not only Taiwan, but of music coming from nature. After about two years of performing Hengchun folk songs as I learned them from my teachers and then making modern arrangements of them on piano and for my band, I began to write my own songs on the lute with different tunings and fingerings. I had a very productive period at Yaddo Residency in 2011, just before I left for my Fulbright [Fellowship] in Indonesia. The songs were also very much based on the amazing people and artists I met there, and the elders who taught me many songs and opened their hearts to me so generously. It was powerful to see the land and the sea and the mountains of my mother’s birthplace, as East Timor had loomed so large in my imagination while I was growing up, and I was always sad that I was never able to go because of the conflict with Indonesia during those years.

I am so proud of the album, as it captures the long journey not only geographically and ethnographically, but spiritually as well, as I was forever changed and humbled by the remarkable people I met along the way. I allowed myself to be guided by intuition and surrendered to the environment and communities in which I lived. Every moment and meeting was a gift.

What's next for you?

I have many new projects! Aside from this new work I’m making for Asia Society on November 6, I’m building a larger-scale piece tentatively called "Song of Silver Geese" to premiere at Roulette on March 25, 2016, with support from Chamber Music America’s New Jazz Works and New Music USA. It will eventually be another solo piece, also directed by Garin Nugroho, but I will first compose completely new music for the Mivos String Quartet as well as my band Jade Tongue and dancer Satoshi Haga. Then I will distill it into a solo piece, perhaps using electronics and projections to deal with translation in new ways. So it is in a way the opposite process of creating Solo Rites: Seven Breaths. I am always seeking to challenge myself and not get comfortable with something, even if I know it is “successful." I like to undo what I have learned in a way, to try and uncover new territory within myself and each person in the audience.