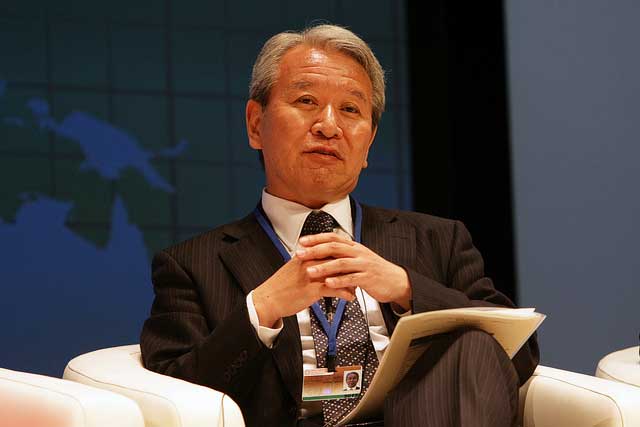 The Japanese International Cooperation Agency (JICA) is one of the largest and most influential providers of official development assistance in the world. JICA is also the Japanese government’s flagship institution for fostering economic and social growth in developing countries.

Dr. Akihiko Tanaka became the President of JICA in 2012 and previously served on the faculty and as vice president at the University of Tokyo. He spoke with Asia Blog via email just prior to his luncheon conversation, "Japan and the World: A New Global Strategy," at Asia Society New York on Wednesday, April 29.

Could you share some background about your journey? How have your academic career and research interests led you to your current work with JICA?

As an academic, I have been studying the nature of the contemporary world system as well as Japan’s foreign and security policy. In a book I published in 1996, entitled The New Middle Ages: The World System of the 21st Century, I argued that the role of non-state actors would become more and more important, that relations among state and non-state actors would become more and more complex, and that it would be useful to regard the world as comprising of three spheres: the sphere where democratic peace and economic interdependence would prevail, the sphere where the logic of modern international relations based on realpolitik continues to operate, and the sphere where civil wars and internal fragility pose tremendous developmental and state-building challenges.

When I was asked to become president of JICA, I was not very aware of the relevance of my research to Japan’s ODA [Official Development Assistance, an arm of the Ministry of Foreign Affairs]. But as I am now more deeply involved in JICA’s work, I have come to believe that developing countries are diverse and face different challenges depending on how they are positioned with respect to my three-sphere model. Those that are becoming “middle-income countries” face challenges of further democratization, more effective economic institutions, and capacity development to generate more innovation. On the other hand, fragile countries need basic state-building and necessary infrastructure — both hard and soft — in addition to resolution of civil wars and internal strife.

What I feel is a remaining challenge for an aid agency like JICA is effectively responding to the varied circumstances of different countries; as an academic I may simply explain why these countries are facing different and difficult challenges, but as a practitioner I feel compelled to respond with concrete ideas and concrete projects.

What makes JICA's approach unique among the various government-based development agencies around the world?

JICA is unique in its comprehensive range of activities; it is an organization that can integrate virtually all aspects of Japan’s governmental bilateral development cooperation. It manages Japanese ODA loans, about 70 percent of Japan’s grant aid programs, most of Japan’s technical cooperation programs, including volunteer programs, as well as emergency response operations. We try our best to integrate many schemes, loans, grants, and technical cooperation in order to address most effectively our partner countries’ development needs.

Another important element of our uniqueness is our emphasis on “field-based” project formation and implementation. Our staff can be found in offices around the world, are in close consultation with the officials and people of our partner countries, and go to project sites frequently to fine-tune our operations.

As in the case of many Southeast Asian countries, Japan’s ODA has contributed to remarkable economic development by helping to improve their business climates, leading to substantive direct investments by many Japanese corporations. Moreover, the Japan Overseas Cooperation Volunteers (JOCVs) are extremely popular in all of our partner countries and contribute significantly to the enhancement of people-to-people friendships between Japan and JICA partner countries.

Can JICA's development model be adopted in other regions around the world? Is there a global model of development?

Even though JICA’s operations had been associated largely with Asia until the end of the last century, Africa is now our priority, as are fragile states in other regions. Since 1993, Japan has organized and hosted TICAD, an international conference for discussing African development every five years (every three years starting from 2016).

Our traditional emphasis on the importance of infrastructure to economic development, including poverty reduction, is now accepted all around the world. Also, our mantras of “self-help” and partner country ownership have almost reached the status of common sense in development cooperation.

Furthermore, some of Japan’s/JICA’s flagship projects are now being welcomed in countries beyond East Asia. 5S/Kaizen projects are showing results in Ethiopia; “Lesson Study” in elementary education is achieving great success in Zambia; SHEP (smallholder horticulture empowerment project) which we started in Kenya is now spreading to many other African countries.

In the negotiations over the Post-2015 Development Agenda, Japan has stressed the importance of such concepts as “human security” and “quality growth.” We are gratified that the Synthesis Report of the Secretary-General on the Post-2015 Development Agenda uses the phrase “people-centered approach” and includes the three elements of what we consider to be crucial for quality growth: inclusiveness, resilience, and sustainability.