Interview: Michael Zhao on E-Waste and Its 'Colorfully Toxic Afterlife' 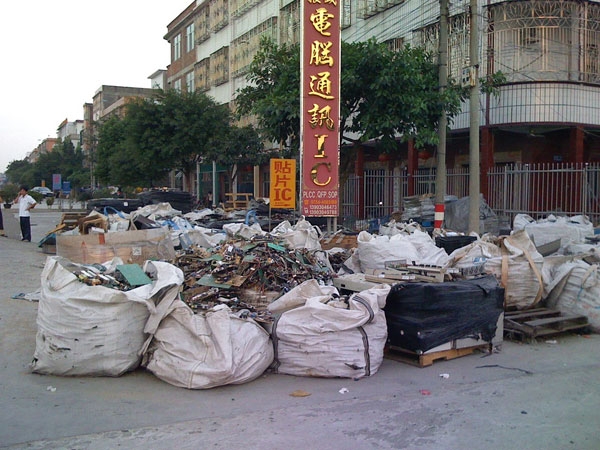 When consumers dispose of their old electronics — MP3 players, television sets, gaming consoles and cell phones — the waste is exported to countries like China, where cheap labor salvages reusable components and valuable materials from the circuitry. Using acid baths and molten tin to coax gold and computer chips out of defunct electronics, the workers put themselves and the environment at extreme risk of poisoning.

Zhao recently discussed the inspiration for E-Waste: Afterlife, and his experiences creating the film, with AsiaSociety.org.

I stumbled onto this topic when I was studying journalism at Berkeley and was shocked to learn that this is happening and it has been this way for decades. I was also studying multimedia and this project convinced me, with all the visual elements, that a multimedia treatment is absolutely the best way to go. And with all the visuals, the story has all these mind-blowing factors.

What was it like to film in these processing centers near things like burning vats of acid melting gold off of chip boards?

It was horrible, first of all to my own health that I had to suck in all the devastating fumes and smells of all kinds of circuitry, then also feeling sorry for the folks who have to do this day in and day out to make the money to survive — with their kids around most of the time. It was sad to see these people subjecting their own health and their kids' health to these horrible conditions just to make a living.


The workers seem to be well-aware of their hazardous working conditions; at one point in the film they warn you away from their work space so you don't get poisoned. Did you get a sense as to why they choose to continue working there anyway?

Yes, they are aware, and at the same time they also value the fact that they have a job that pays bills and feeds the family. It's a kind of catch-22: they probably are having a hard time finding a decent job that pays well than this while working in much better conditions. The workers in the worst possible conditions get paid more than those who are cooking the chips and motherboards, and it all comes down to economics. They are quite short-sighted, and they just go after the money: as long as they get paid more, they are willing to take the risks.

In creating this film, how widely prevalent did you find this issue to be? Who seems to be the most aware of the problems of e-waste, and who needs to know about it the most?

This is quite common in many developing countries. I can only speak for China, and I am aware that Guiyu isn't the only town like this. There are quite a few towns like this that deal with e-waste or other wastes in similar fashions. It's not like these towns are everywhere in China, but there are a few places that have established themselves as a cluster of this industry, Guiyu being the most famous.

Not many people are aware of this issue, in China or elsewhere. And this is why we do this and call attention to this issue, so that people around the world can be more responsible dealing with their e-waste and try to make sure that their collectors don't end up just shipping e-waste overseas to dump to poor communities like in the film.

Do you feel like the e-waste problem can or will be resolved in the near future? What steps need to be taken to resolve it? What obstacles are in the way of a solution?

I am not optimistic it will be solved in the near future. First of all, the US government needs to catch up with more stringent regulations, like [those imposed by] the EU and other countries. And the industry will also need to be part of the solution. [As] the very source of the issue, electronics manufacturers need to come up with better and cleaner designs, to try to cut down on the toxic materials going into the chain and thus ... make recycling a lot easier, and cleaner.