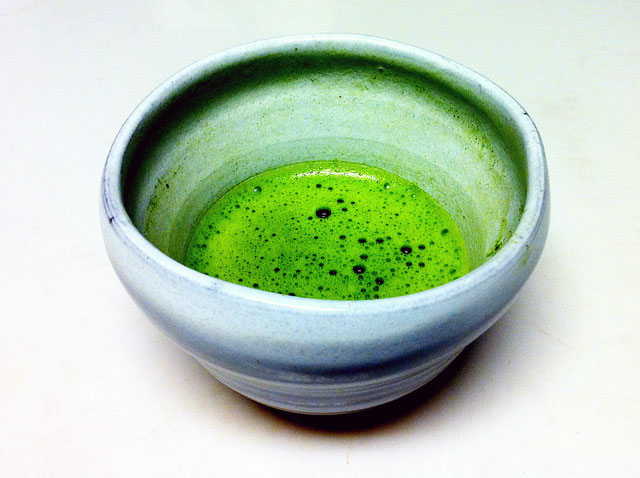 Matcha tea is not just your average green tea, as most people believe, but a powerfully versatile substance with many culinary uses and roots dating back to tea rituals in Japan and ancient monks in China. American chef, tea connoisseur, and founder of Breakaway Matcha Eric Gower, known for his "breakaway" cooking techniques, gave a talk at Asia Society Northern California Center on July 30 in which he educated the crowd on the history and uses of matcha.

"People just don't know what matcha is. There is a lot of education that has to be done," Gower told his audience.

In an effort to learn more about matcha, Asia Blog reached out to Gower via email and cleared up some misunderstandings that people have about the multidimensional ingredient.

In your experience, what are some of the most common misconceptions that people have about matcha tea?

That "matcha is matcha." Meaning: if you ask someone if she's heard of matcha, the answer is often yes — it's the green tea used for the sweet and milky green tea concoctions at Starbucks and Peet's. It's something you add milk and sugar to. There is some vague notion that quality might be involved, somehow, but matcha is basically a ground tea powder to which one adds fat and sugar.

Almost all of the matcha in the North American marketplace is what I call "culinary" matcha — it's meant to be used in cooking, for green tea ice cream, and confections of all kinds. One can use a quite low and inexpensive grade of matcha for this purpose, because the fat and sugar and all other ingredients will dominate the flavor, and one can't really notice whether the matcha is any good or not. Hence, "matcha is matcha."

But that matcha should be thought of as "cooking wine." One wouldn't pour a glass of cooking wine to accompany a nice meal (or any meal) — one cooks with that wine. Same with culinary matcha; it's for cooking, not drinking. Matcha meant for drinking straight up, with nothing added, requires some very specific growing, harvesting, and processing techniques. It's very hard to do, and requires a huge amount of specialized labor, all of which drives the price up far above what culinary matcha costs.

You've claimed before that Matcha has significant health benefits. How much of that is scientifically verified? And what exactly are these overall health benefits — are they for every body type, for instance?

The body of research on the health benefits of matcha is quite extensive in Japan (in Japanese), and much of it is linked to cancer research. The medical community in Japan has longed looked at matcha as one tool among many for optimal health. American doctors, too, are recommending a daily green tea habit as one step toward improving overall health.

Matcha is simply a special powdered form of green tea, that's all. It's not a magic health tonic. It contains no sugar, sodium, or fat. It has three calories per serving. It contains lots of phytonutrients and flavonoids that help neutralize free radicals that, many scientists believe, damage the body. Matcha has more antioxidants by weight than any substance on earth.

More than 3,000 published research studies have examined the role green tea may play in cancers of various sites. We can cite a lot of these, but virtually all of them conclude that drinking green tea is an extremely low-risk, extremely high-reward activity for people with cancer. It's pretty much all upside and no downside, though one cannot make any kind of causal claim on matcha's relationship to cancer cells.

Can you educate us a little more on how the traditional Japanese tea ceremony relates (or doesn't) to matcha?

Matcha is the tea used in chanoyu (the traditional Japanese tea ceremony). It all started with Buddhist monks, who found that grinding up unfermented/raw tea leaves in a mortar and drinking the entire concoction with hot water kept them awake better during long meditation sessions. Buddhists being Buddhists, complex rules soon developed as to how the process was properly done. In those days (13th century and onward toward modernity) the Japanese aristocracy (samurai mainly) took a lot of their social cues from Buddhists, who had quite a bit of social cachet. So they started adding even more layers of rules on how a proper ceremony was to go down. These increasing layers of rules served as barriers for common folk; one had to undergo a fairly rigorous training in the making and serving of matcha to be considered a cultured/refined person, and only the wealthier classes could afford such luxuries. Eventually, over the centuries, the ceremony democratized quite a bit, and increasing numbers of people came to study it.

By the 16th century, professional tea masters, such as Sen No Rikyu, developed the tea ceremony into a highly choreographed ritual that makes use of many art forms, including ceramics, painting, lacquerware, culinary arts, architecture and design, calligraphy, flower arrangement, and even gardening. It's hard to think of another pursuit that draws on so many disparate artistic pursuits.

The enjoyment of matcha was at first practiced exclusively by men (monks and influential leaders, mostly), but, over time, women became increasingly involved. Today, women far outnumber number men in the pursuit of chanoyu.

A recent Buzzfeed video takes a sensational approach to Americans eating "exotic" Asian food. As a "foreigner" who's had plenty of experience traveling and living in Asia, how do you feel about the general attitude Westerners exhibit toward Asian food?

That's a truly horrible video! Ugh. It's a very old scenario, however, played out in countless different countries over the centuries. People seem to delight in grossing out one another with food from another place. Thankfully, almost everyone I know in the SF Bay Area, where I live, has a pretty open mind toward Asian food, and they tend to eat quite a bit of it. There is a certain cachet involved in being familiar with, and fond of, unusual Asian foods. But that's probably not the case outside the bigger cities …

What do you think the future holds for matcha and tea in general?

The future of matcha is incredibly bright. In my experience about 99 out of a hundred people really enjoy coldbrew matcha, i.e., matcha made with icy cold water instead of hot. It's being served all over the Bay Area and L.A., in cafes and restaurants, but also in forward-thinking companies. Forward-thinking companies like Twitter, Square, Zynga, Airbnb, and Evernote all make matcha available to their employees. It's especially popular among HR, since they're well aware that matcha tends to make employees more productive, more alert, and healthier in general.

The trick is to make matcha fit into the context in which it's consumed. If matcha can only be enjoyed via a proper ceremony, then the barriers to entry are so high that no more than a handful of people will ever taste it. But if it can be placed within the context of the workplace, the cafe, the gym, the yoga studio, the home, and — this is America! — the car, without any barriers to entry and just be simply prepared — especially cold — then the only limit to matcha's future growth will be the farmers who produce this magical substance. It's HARD to produce good, let alone great, matcha. Unlike the case with other teas, no one has successfully produced it on an industrial scale; it's too labor-intensive and expensive to scale. And the know-how needed to produce great matcha is rare. Some companies in China and Taiwan are attempting to grow and produce matcha at scale, to meet the demands of the current boom going on, but this stuff tends to taste just terrible — it's really just ground up green tea, not matcha. Perhaps we can save how great matcha is produced for a different blog post.