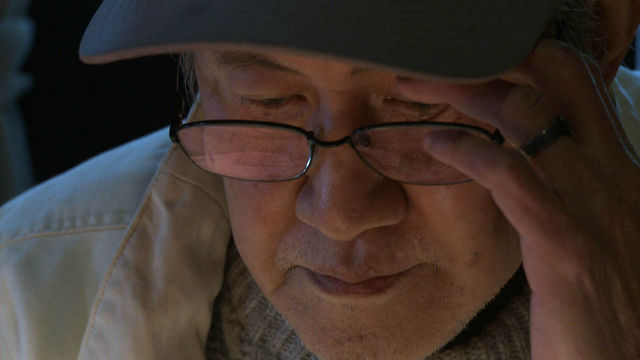 Dreaming Against the World is the story of critically acclaimed Chinese artist Mu Xin, who risked his life writing and painting in solitary confinement while imprisoned during China’s Cultural Revolution. Co-directed by Oscar- and Emmy-nominated filmmakers Timothy Sternberg and Francisco Bello, the film portrays the artist's incredible commitment to his artistic vision and integrity.

Ahead of the sold-out April 23 world premiere of Dreaming Against the World at Asia Society New York, Asia Blog caught up with the co-directors via email to discuss the film.

Around 2008 we were researching a very different film than we ended up making. Our original concept was a documentary on three generations of Chinese artists, set against various milestones of Chinese history. During that research, we discovered Mu Xin and were instantly fascinated by his story and his work.

We acquired a copy of the catalogue for Mu Xin’s 2002-2003 traveling exhibition, The Art of Mu Xin: Landscape Paintings and Prison Notes. In addition to reproductions from the exhibition, the catalogue contains essays on his life and work, as well as translations of the prison notes that are an amazing window to Mu Xin’s world: integrity, refinement, courage and humor in the face of incredible adversity. After getting to know his story, we felt that there was a really interesting film to be made.

We knew Mu Xin was notorious for rarely granting interviews. But with the help of Dr. Alexandra Munroe, Toming Jun Liu, Wu Hung and our executive producer Fred Gordon, we met the writer and painter Chen Danqing, who not only helped us secure an interview but also accompanied us to Mu Xin's home in Wuzhen. Mu Xin was wary at first, but Danqing assured him that we were serious in our appreciation of his work and not just trying to portray him as a victim, and we were able to gain his trust.

The result is the Mu Xin that you see on screen in Dreaming Against the World — brilliant and funny, but also at this late point in his life, uncharacteristically reflective and vulnerable.

Could you share more about your experience and process translating Mu Xin’s story into film? What was it like working with Mu Xin?

During filming, Mu Xin danced around certain questions regarding some of the darker parts of his past, which was understandable considering what he went through. Because the conversation unfolded over a period of days, we would revisit questions over long stretches of time, and he gradually opened up.

Making a film about an artist is always going to be a challenge. First, you have clichés to fight against: "the tortured artist," "the ecstasy of creation," and all those other overused tropes you see time and again in both fiction and documentary films. Secondly, we wanted our film to be approachable by both Chinese and non-Chinese audiences, so we had to address the historical backdrop that affected Mu Xin in a way that would be clear for anyone watching the film. We had to portray China's complex history in a way that supported our story without drowning out Mu Xin’s voice. Thankfully, we had the good fortune to work with the writer and activist Ming Xia who helped us with researching and presenting things in a simple, clear way.

Then there was the challenge of representing the past events in Mu Xin’s life — his childhood before the Maoist period, his incarceration, etc. We worked very hard to design and shoot the recreations in a way that was expressive and worked with the visual palette of the interviews and his artwork.

What role does Mu Xin’s artwork play in the film?

We hope the landscape paintings and the prison notes are on equal footing as characters with Mu Xin and Chen Danqing in the film because that’s the core of the story: how these works came to be and how, incredibly, they ended up in art galleries many years after they were created.

Showing artwork on its own terms in a film frame was another major challenge we had to address. First there is the issue of scale. Both the landscape paintings and the prison notes are really small. This is for the practical reason that Mu Xin had to keep these hidden for his own safety. However, the result is that they are intensely intimate. You can hold them in your hands. For research, we had a private viewing of the original landscape paintings at the Yale Art Gallery with the help of David Sensabaugh. Until then, we relied on reproductions from the exhibition catalogue, and it is an understatement that seeing these in person was very powerful for us.

What historical themes did your team uncover while researching the film?

For us, an important theme was what Mu Xin called the “second level of significance.” Mu Xin resists (and we think rightfully so) being labeled and reduced to the status of being just a persecuted or exiled artist. But as storytellers, it was impossible for us not to examine his life and work alongside one another. History shows us that Mu Xin was not alone in his experiences in China — there were thousands of others during the Cultural Revolution who suffered similar or worse fates. Globally, there are other artists and writers who suffered due to political environments that viewed them as dangerous or subversive.

So Mu Xin has shared the experiences of not only some of his countrymen but also other artists across cultures and human history. But when the work remains and it touches us deeply, across time, politics and culture, they can accrue this "second level" of significance. The first level stems from the time in which the work was created, but the second meaning emerges over time and transcends its original context — and Mu Xin would argue that this is the more important and "true" of the two meanings. Mu Xin's work passes this test of being merely a product of circumstance, and we hope that audiences agree.

What do you hope viewers will take away from the film?

Mu Xin had an almost super-human integrity and commitment to his work, something that any artist working in any discipline should aspire to. Mu Xin repeatedly cited a quote from Flaubert: "Reveal the art, conceal the artist." This may be a counterintuitive message to many artists today, but the idea that the work is what matters most is something we hope to communicate in Dreaming Against the World.