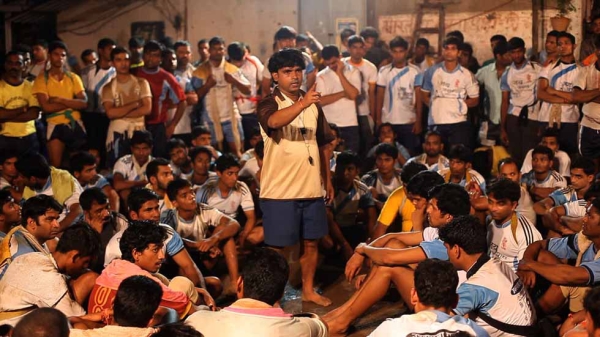 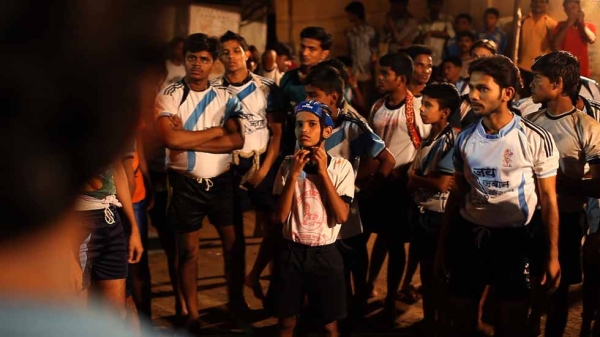 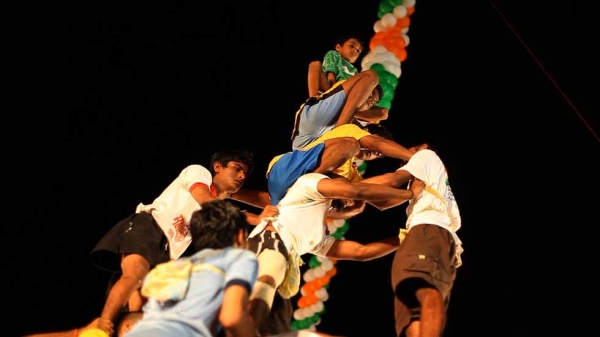 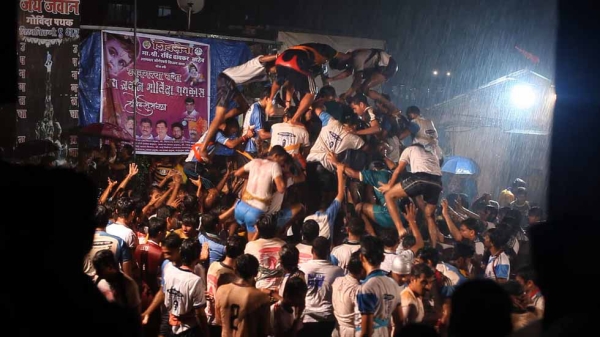 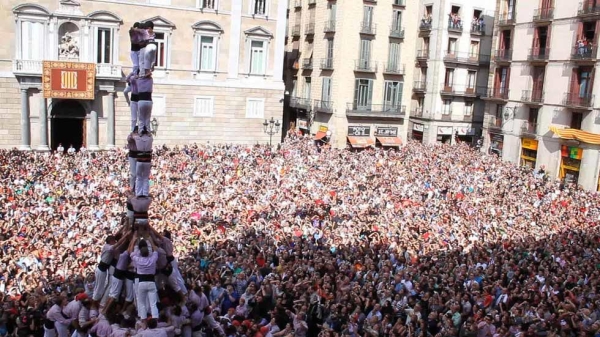 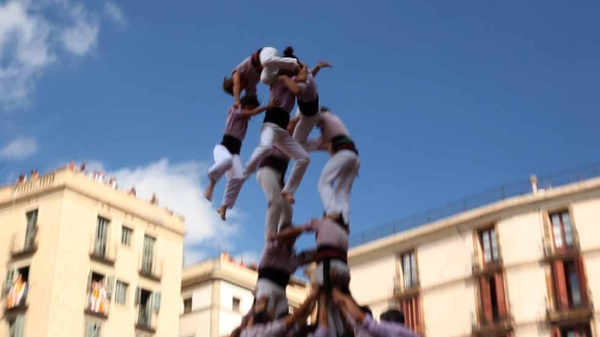 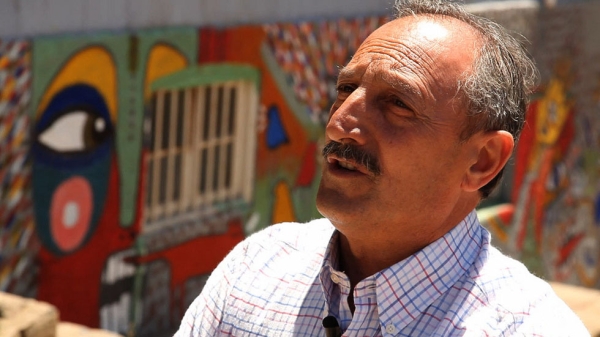 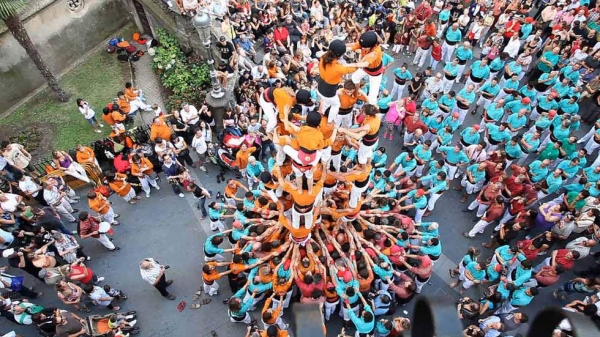 Three teams in three countries across three continents. Each has the same goal — to build human towers that reach toward the sky — all for a touch of glory. In a story that unfolds in India, Catalonia and Chile, filmmakers Ram Devineni and Cano Rojas document the trials and triumphs of each team in their new documentary The Human Tower, which screens as an Asia Society co-presentation with the 36th Annual Margaret Mead Film Festival in New York City this Thursday, November 27.

Hyderabad-born Devineni moved to New Jersey with his family in the late 1970s. A graduate of Rutgers University, he recently produced Amir Naderi's feature film Vegas: Based On A True Story, which premiered at the Venice and Tribeca Film Festivals , and Beatriz Seigner's feature O Sonho Bollywoodiano, which was released nationally in Brazil and shown at the Mostra Internacional de Cinema in Sao Paulo and the Pusan International Film Festival. He founded Rattaplax Films, which also publishes poetry books and DVDs and has received grants from the National Endowment for the Arts. A resident of New York City since 1999, Devineni travels frequently to India and Brazil.

Rojas, a Chilean filmmaker and photographer, has been living in New York since 2004 and holds an M.S. in Global Affairs from New York University. With a strong focus on documentary and a special interest in multicultural relations and global issues, his filmmaking has taken him to locales like Hawaii, Indonesia, Thailand, Chile and India, to name a few. His past work include films with directors like Morgan Spurlock for a variety of platforms like ESPN, Hulu and Yahoo. His current project is his first fictional script, a story set in Mali, Africa. In addition, Rojas is also working on two documentaries: one set in Senegal, while the other follows small farmers in rural communities in three different countries.

Asia Blog reached out to Devineni and Rojas to learn more about The Human Tower ahead of its New York screening later this week.

How did the two of you meet? How did you find the story and these three teams? Is there a connection between how you two met and how this story came about?

We met nearly decade ago at a poetry event organized by a Chilean arts activists group called Casagrande. Ram originally wanted to make a film about cultural perceptions of the "perfect" shape — a triangle. He knew about the castellers in Catalonia and asked Cano about filming them with him. The story was still not entirely formulated, but when they saw a YouTube video of disparate poor communities building towers in Mumbai, then they knew this was the movie. While in Mumbai, we were introduced to the Indian team through the main promoter, Jitendra Ahwad. Immediately, we knew that this team and their enigmatic and obsessive coach, Sandeep, would be our focus. It took some time to earn the team's trust, but we kept coming back day after day until we blended into the scenery. At the main "Superbowl" Govinda event in Thane, we met the Vilafranca team who were invited to present their style of tower building. It was faith, and we headed to Catalonia right from India.

The Chilean part of the film developed much later. Vilafranca's legendary coach, Melilla, went to prepare the Chilean team for their first public performance at the Universal Forum of Cultures in Valparaiso where they attempted the first seven-level tower in Chile.

One of the characters in your film says, "Building human towers is medicine for the soul." Why do you think so many people risk their lives to do this?

We think risk is relative. Although it is dangerous and people have died making human towers, overall it's a safe activity. The main reason is because they practice continuously and trust each other totally. It's when teams do not practice, and do not build that trust, that we see the horrific falls. Additionally, the teams form a large solid base. All the levels are equally important; but when building really tall towers, the base is the most important part. You can see trust amongst strangers from different classes, races, and cultures being built in the base. Being cramped together and creating something profoundly beautiful immediately changes people.

Is building human towers something anyone can do or do you have to have an athletic background? Is it considered a sport? How early in their lives do people start participating?

Human tower-building is not considered a sport, but a cultural activity. The teams do compete in large public plazas, but mostly do so to show pride for their town or city. It's a friendly competition. The tower builders in all three countries come from all economic and social strata. Passion and courage are the two most important characteristics. Not everyone can climb to the top or be part of the core of the base. These people train continuously and are tested and nurtured. Often, they have been building human towers since childhood. Some players start at the top, and move down in the levels, as they get older and bigger. For example, Melilla with Vilafranca has been building castells for over 50 years. When he could no longer participate inside the tower, he became their coach.

Your story follows a Catalan, a Chilean and an Indian team. What were some of the similarities and differences you observed among the three?

Passion and dedication between the teams are equal. What distinguished them were experience and the level of development of the activity in each country. In Catalonia, the teams practice and prepare all-year-round for the festival season, with just a short break of a couple of months. Once the season starts, the Catalan teams have many opportunities to present their towers to huge crowds. In India, the teams only have one day during the Dahi Handi festival to compete. Also many of the Indian teams only practice a few weeks before the festival. As a result, the Indian teams are limited in their development.

In the case of Chile, it is a relatively new activity and there are not that many places to showcase their towers. Still, it's remarkable to see them advance so fast because of the training and leadership of Melilla and the Vilafranca team.

Building human towers requires a lot of trust, balance and endurance. How did the teams respond to having a film crew following their endeavors? What were some of the memorable moments for the two of you during the production?

We had one golden rule: never put the players in danger with our filming. So we were always cognizant of where we were situated with the cameras. The teams appreciated our commitment and were very cooperative. We do not feel we were denied any requests. Probably the most memorable experience was the Dahi Handi festival. You have to remember that it was just two people filming a huge spectacle, which would normally require 20 cameras. Since the Indian team and we were totally in sync and in the zone, we were able to get every shot we hoped for and the footage looks stunning. Highly emotional and honest.

Watch the trailer below: