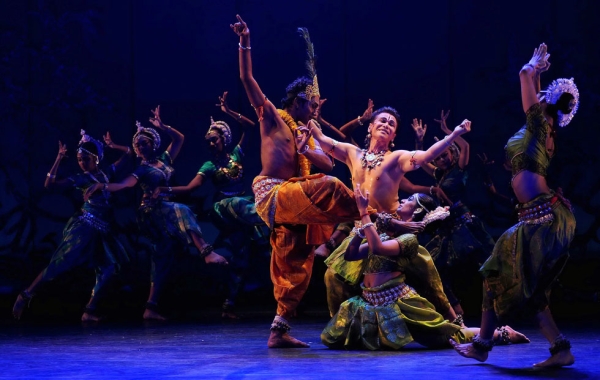 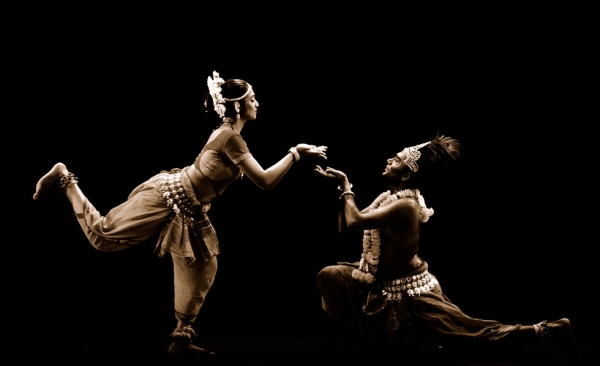 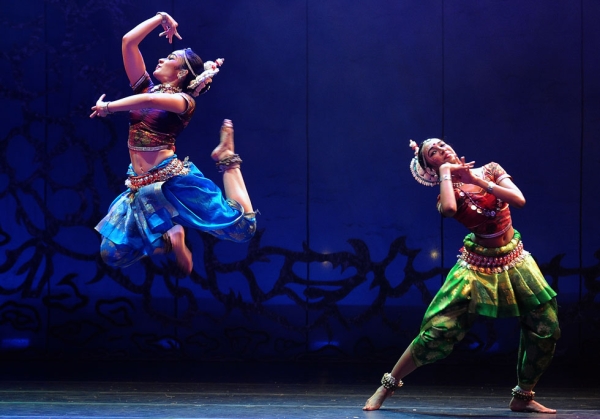 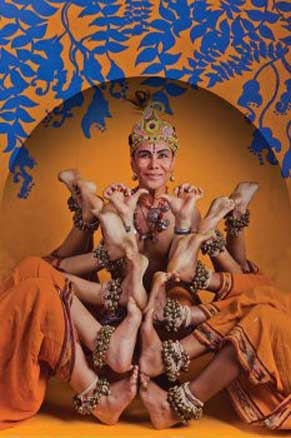 Malaysian dancer, choreographer, and artistic director of Sutra Dance Theater Datuk Ramli Ibrahim is recognized within and beyond Malaysia for his visionary and inclusive creativity. Trained in classical ballet, modern dance, and Odissi, Ibrahim envisions unity within the diversity of all of Sutra's artistic endeavors. Perhaps this is not surprising, given that although Islam is currently the state religion, historically Malaysia has honored cultural ties with Buddhist, Christian, Persian, Hindu, and other cultures. In Krishna: Love Re-Invented — which he and Sutra present at Asia Society New York on Thursday, November 6 and Friday, November 7 — Vaishnavite practices, Deba Prasad Das's Odissi technique, contemporary choreographic approaches, and calligraphic patterns all combine as one sumptuous, sensuous offering.

Isn't this, in fact, what Edward Said has castigated as being the stereotypical image of the Orientalized other? But dancing Krishna in Malaysia and India is more complicated than simple self-exoticizing. Orientalization is the projection onto an empty other, an "East" that does not speak back. The ballet is reverent throughout, but like the cheeky Krishna, the opening and closing scenes of Love Re-Invented do talk back to us! The formal symmetrical arrangement of haremlike feet surrounding Ibrahim (image #4, above) toe-ily challenges dichotomies of us/them and invites us instead to smile lightheartedly at our notions of Orientalism.

Ibrahim took time to delve into these and related questions prior to Sutra Dance Theater's upcoming Asia Society performances.

Here's a question I never asked before, in part because your commitment to dancing Odissi is evident in your work — the dances, the narratives you construct, and in your own performing. You have been celebrated as a cultural icon in India and in your home country you are recognized as living national heritage. How do you reconcile these divergent cultural influences in your perspective?

There are many layers if one is to analyze the many contemporary trajectories that Odissi seems to be taking at present, from within Odisha, within India, and outside India — all of which are influencing one another in forming the contemporary Odissi "make-over." In "Stirring Odissi 2008," a conference organized by Sutra in Kuala Lampur, we discussed "Preparing Odissi for the 21st Century."

There is a long history of cultural interconnections between Odisha (formerly known as Kalinga) and Malaysia. The Bujang Valley in Kedah (known as Kadaram in ancient times) has one of the oldest archeological sites of Hindu/Buddhist communities (dating back to the 4th and 5th centuries A.D) in Southeast Asia. Kalinga, the old name of Odisha, is known to all the Southeast Indianized states — Malay Peninsular, Java, Sumatra, Cambodia, etc.

Odisha still celebrates "Bali Jatra" — a traditional annual celebration of sending off traders to "Bali" (Southeast Asia). Biju Patnaik (former Chief Minister and father of modern Odisha) simulated this in 1992 by sending a cultural emissary, in the form of a ship, from Odisha to Bali. This cultural expedition was curated by Dr. Dinanath Pathy, an ardent collaborator with Sutra. Indians in Southeast Asia are still called "kelings" — a name derived from Kalinga. Malaysia has now a strong Odissi following. I have a strong connection with Bali — I used to have a house in Sayan, Ubud overlooking the rich cultural valley of the Sayan River, exactly where the American-Canadian ethnomusicologist Colin McPhee used to foray in the 1930s. I admire Indonesian culture and dance, especially Javanese dance. I find this continuing interactive cultural connection of India with the "Indianized Southeast Asian states" most fascinating.

Given that we are about to see an Odissi ballet about Krishna, what unique advantages/disadvantages do you have in envisioning and producing this ballet from your cultural location in Malaysia? More independence? Less freedom? Concern about making meanings accessible and universal?

Our Sutra dancers are trained here, in Bharatanatyam and Odissi, besides being familiar with ballet and modern dance technique. Sutra has the advantage of having its own dancers and also a creative base where it can conduct its own dance laboratory to experiment and develop new approaches in presentation and composition. One of Sutra's significant contributions to contemporary traditional Odissi is in the creative use of space and in group composition. I also incorporate a "voice-text' (in the absence of a sutradhar) to help the audience access nuances befitting a classical genre replete with its own mythic, literary references which may not be appreciated without adequate and, of course, dramatic presentation.

Sutra's disadvantage is in not having an in-house creative Odissi music consultant who can work in tandem with Sutra. Sutra has to go to Odisha to commission works. Sutra has commissioned dances, but they have always been in the traditional genre. However, Sutra produces new contemporary works as well. For example, as recently as three months ago, Sutra presented a full-night triple-bill program with the Malaysian Philharmonic Orchestra, featuring works by Debussy, Ravel, and Stravinsky, that used a substantial Odissi dance vocabulary.

What draws you to Odissi dance, and what aspects of it have sustained your interest over time?

First, it was the music. When I heard Pandit Raghunath Panigrahi sing the Odissi songs (in a '70s French recording) I was attracted to its sensual melody, distinctive rhythm, and lilting texture. It was an early recording with Kelucharan Mohapatra on the mardala, augmented by recorded tintinnabulations of ankle bells, supposedly of Sanjukta Panigrahi dancing.

Later, when I saw Odissi for the first time, I was attracted to the aesthetic of the Odissi tribhanga, especially in the play of the ribs as the dancer negotiated the changes in body weight during stepping. I think this is the key to Odissi’s charm. I was then dancing Bharatanatyam in the style of which is almost totally Apollonian in its approach. In doing Odissi, I found that emotional releases were available and allowed — and that the "over-refinement" of classicism creates a "haloed" and overpowering presence.

Though I was exposed to the Kelucharan Mohapatra style of Odissi dance, I felt a more natural attraction to the style and composition of the late Deba Prasad Das, which thematically tend to focus on Shaivite and tantric concepts and practices. This is not to say that there is no Krishna item in Deba Prasad repertoire — the production we are bringing to New York pays homage to Krishna — a Vaishnavite theme. However, most of the works we perform from the Deba Prasad repertoire are usually Shaivite.

Kelucharan, on the other hand, grew up in the Gotipua village of Raghurajpur, which is thoroughly oriented towards Krishna as natavara, the pastoral god-lover-dancer. Debuji was a minimalist by comparison, more austere and less embellished. So the Odissi that we are familiar with in Malaysia is based on the more "rare" Deba Prasad parampara. Throughout the Odissi dance world, the Kelucharan Mohapatra style of Odissi is dominant. But Malaysia is a unique spot in the world where the Deba Prasad style of Odissi flourishes.

Is it hard that what you do is not exactly typical within your own culture, and your art is deemed as self-exoticizing in the outside world? In New York (especially around Columbia) we can be perhaps hypersensitive about "Orientalizing," even when we all self-exoticize.....

I see our work as a dance-theater piece. So I have no "guilt" about Orientalizing the dance. Can you also say that Pina Bausch is "exoticising" angst? But in framing Odissi in Malaysia it is also pertinent to ask, what happens when the broad-based cultural diversity encouraged and espoused by slogans is taken to its ultimate limit? How does a diaspora cultural manifestation measure to that of its place of origin? What happens when globalization allows culture to flow freely through national barriers, man-made and artificial? Does art truly find its own level? These and many other questions hang enigmatically with Sutra's Odissi presence in the national and global context.