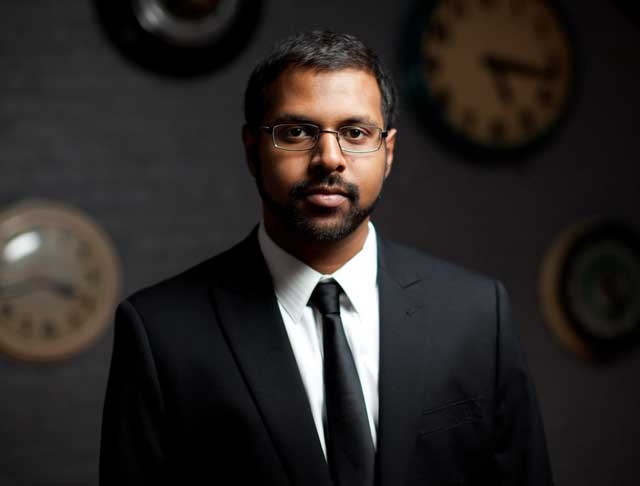 Critics are reaching for superlatives to describe the new album by singer-songwriter Bhi Bhiman. On NPR.org, veteran music writer Robert Christgau calls him a "a penetrating melodist as well as an accomplished guitarist and a striking singer," while the Washington Post hails his new album Bhiman as "first-rate, folk-based and undeniably unique."

Perhaps more interesting than the accolades, though, are the comparisons people are constantly making about the artist, the son of Sri Lankan immigrants, who grew up in St. Louis listening to grunge. Christgau compares his singing voice to Nina Simone, the New York Times describes the new album as "a mélange of 1920s blues, 1960s folk and 1970s soft rock," and Bhiman's own press release likens him to such all-American artists as John Prine and Randy Newman.

Where does a musical chameleon like this come from? Via email, Bhiman took some questions from Asia Blog about his influences, his songwriting, and how his parents responded to his choice of a vocation.

Your parents emigrated to the United States from Sri Lanka, and you have said that you grew up in St. Louis listening to grunge. Meanwhile, your current music contains elements of traditional American genres like folk and country & western, and you've been compared to songwriters like Woody Guthrie and Randy Newman.

How did you find your way to this kind of classic Americana? Did you go through a conscious process of educating yourself about this music?

All I have known all my life is American music. My earliest musical memories are listening to "oldies" music (50s and 60s American pop) on St. Louis radio. From country to blues and R&B and rock & roll. And being a solo guitarist/singer, there were several folk giants I could learn from. It was not so much a conscious effort but a fascination that still interests me. The Internet is an amazing tool for discovering and researching different styles of music.

Critics are singling out your ability to create first-person narratives, like the one sung by the worker in "Kimchee Line." Do you begin writing songs with a particular character in mind, or is the initial inspiration more strictly musical?

With "Kimchee Line," I came up with the hook first, and had a character and situation in mind. That's how it happens more often than not. But sometimes a song can form purely from music and melody. Each song seems to come about in a different fashion, with different clicking points.

The video for your new song "Guttersnipe" has been drawing attention for its evocative footage shot from moving trains in India. Can you tell us how the video came about, and why the images seem to sync so well with the music?

The video came about as I was looking on YouTube for train footage that might go well with the song. And I came upon a video from a travel blogger named Nomadic Samuel. He had set up a high-speed camera on a moving train car and captured some incredible scenes, and I knew it was something special. I contacted him and he was nice enough to give me his permission to use the footage. The song itself is supposed to be mimicking the rhythm of a train, and the lyrics meant to be universal. So the Indian train footage moves at the perfect pace for the music and the lyrics of "Guttersnipe." It's like a 5-minute movie.

Your tribute to Albert Pujols, "Prince Albert," evokes the old-timey baseball song "Joltin' Joe DiMaggio." How did you feel when Pujols signed with the Los Angeles Angels this past December? Will you still perform that song?

Pujols leaving and signing with the Angels was a gut check for Cardinal fans. But after the rawness of it wore off, most fans are in agreement that the team is better off spending his money elsewhere. I wrote that song while living in San Francisco, so I have never really played it at any shows with regularity.

Did you grow up in a musical household? Has your family been supportive of your career in music?

My household was not a particularly musical one. My mother humming while washing the dishes was the extent of it. But at the same time, my parents were very supportive. That doesn't mean they weren't scratching their heads about it. A much more acceptable career path for South Asian parents is a doctor or a lawyer. Singer-songwriter is way down at the bottom of the list.