An Interview With an Asian American Trump Supporter 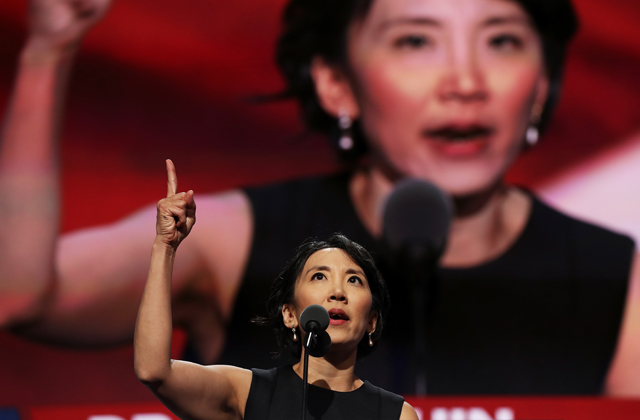 New Mexico delegate Dr. Lisa Shin gestures as she delivers a speech on the fourth day of the Republican National Convention on July 21, 2016 at the Quicken Loans Arena in Cleveland, Ohio. (John Moore/Getty Images)

Over the last quarter century, Asian Americans have become increasingly reliable voters for the Democratic Party. 2016 was no exception. Despite Donald Trump's victory over Hillary Clinton last November, Asian Americans preferred the former secretary of state over the real-estate mogul by a 65 to 29 margin. The 36 point difference marks a stunning turnaround from 1992, when Asian Americans supported President George H.W. Bush over Arkansas Governor Bill Clinton by 20 points.

Lisa Shin hopes to change this trend. An optometrist in Los Alamos, New Mexico, Shin emerged as a prominent supporter of President Trump when she served as a delegate and spoke at the Republican National Convention last summer. The daughter of immigrants from South Korea, Shin says she was drawn to Trump during the Republican primaries because of his vow to crack down on illegal immigration. While acknowledging that the Democratic Party has done a much better job targeting the support of Asian Americans, Shin believes that a Republican appeal to fundamental conservative principles may reverse the party's unpopularity with the group.

Each May — and beyond — Asia Society interviews prominent Asian Americans about their lives and work. See the complete archive.Learn more

Asia Blog recently caught up with Shin, who is the head of the group Korean-Americans for Trump, to talk about why being the daughter of immigrants drew her to support Trump and what she thinks about the president after his first two months in office. The conversation has been edited for length and clarity.

When you think about the reasons why you're a conservative, what comes to mind?

The prospect of upward mobility is definitely something that's unique to America, I think.

I believe in a more limited government. I object to the government having a big role in our lives. I think there needs to be a limit to the regulations, mandates, and laws the government can pass.

I know the government has a purpose, an important purpose. But I think if the government goes too far, they infringe upon individual rights and freedom. I’m always concerned about that.

Were you a supporter of President Trump from the beginning? Or did you support other Republican candidates and switch to the president when he won the nomination?

I was a supporter from early on. When he first announced his campaign, I thought “Wow, he's definitely something different. He’s not a politician."

I wasn’t sure if he was going to be able to win because there were all of these great candidates opposing him. But I definitely had my eye on him from the beginning.

What attracted you to Donald Trump? What was it about him?

To be honest, it really is the immigration issue. I really was drawn to that message. He said “build the wall,” and I thought, “Wow, you never hear a politician say that.” I feel so strongly about this because I don’t believe it’s anti-immigrant to enforce immigration laws. My parents went through the legal process to become citizens, and it was brutal and hard. They had to learn a new language and culture. They endured racism — we all did, growing up.

But we grew up and understood what a privilege it was to be an American citizen, to participate in American democracy, and live the American dream. This is what I talked about in my speech at the convention.

So I just can't agree with people who come here and skirt the legal process. I don't support it. I feel strongly about this because I’ve been through it and I’ve seen my parents go through it.

For people to come here and think “Oh, the [immigration] law is too hard, it’s too long, I don’t want to do it,” well, what makes you think that you can immigrate without going through the legal process? Because no other country would allow you to do that.

People are surprised when they hear me say this. “Wow, are you racist? Are you anti-immigrant?” I don’t think so — it's just law and order. The privilege of going through the legal process and becoming an American citizen is precious and so wonderful.

For me, Trump affirms the value of my citizenship. He’s saying "because you’re a citizen, this is what you get and this is what you’re entitled to. It’s special and important." And it’s not the same for non-citizens. Trump validates the worth and value of my citizenship and that of my parents who made a lot of sacrifices. Trump gets it. I agree with him and I support him.

Actually, I was expecting it. My own family, cousins, and uncle were very upset and disappointed in me. “Oh gosh, you’re such a disgrace and shame for the Asian American community,” they said.

In 1992, a large majority of Asian Americans supported George H. W. Bush over Bill Clinton for president. But over time, Asian Americans have identified with the Democratic Party a lot more and, last year, supported Hillary Clinton by a wide margin. Why do you think this is?

I think that the Democrats have done a great job with outreach, much better than the Republicans have. There’s a thing about identity politics, which I think it’s good and bad. Of course, I identify with being Korean — but at the same time, I think there have to be principles that appeal to all ethnic groups and all ethnic backgrounds.

I think Republicans tend not to play that game as much. They don’t say, “we’re going to go to the black community and try to get their votes.” They don’t do that as much as the Democrats, who are more aggressive. They get out there in the community, they recruit leaders and they grow the party. They get people on their side and they’re great with messaging.

This message that “we’re about diversity and inclusiveness and Trump is anti-immigrant. He’s going to deport you" is very strong and very effective. And that’s why so many Asians and minorities voted for Hillary.

Do you think if the Trump Administration and the Republican Party made an effort, they’d get a larger share of the Asian-American vote?

I hope so. There has been some talk that the Trump administration will reach out more to minorities and Asians, and, even though he didn’t get the Asian vote, he did do better than [2012 Republican presidential nominee] Mitt Romney and [2008 Republican nominee] John McCain among Asians, which was really outstanding. I think that if he can focus on the economy, free markets, supporting small businesses, and education, issues that really matter to Asian Americans in general, I think he really could get more of their support. I think if he starts talking about meritocracy, in particular, it would definitely appeal to Asian Americans.

But it’s really hard to overcome the negative rhetoric. I can see how an Asian might say that Trump doesn’t like immigrants. I don’t believe that’s what he was saying — I think he wants to enforce the law and he supports legal immigration.

President Trump has now been in office for over two months. How do you feel about his presidency so far?

I’m disappointed we didn’t get something with health care. I thought there should have been a compromise, a bill we could have all agreed on. I’m also disappointed because a lot of the things he ran on weren’t in that bill. For example, he was going to take on Big Pharma, and that would have been great. But that wasn’t really addressed. He talked about repealing the antitrust exemption that insurance companies have, and nothing was said about that. I thought that would have been a very positive move, as it definitely would have lowered the cost of health insurance premiums. So there are some things that were left out, and I would have liked to have seen those in the bill and part of the conversation about health care reform.

The president has said that in terms of foreign policy, the United States has been overstretched. Do you agree that the country spends too much on things like foreign aid and our alliances abroad?

I agree with that — and that’s what [Vermont Senator] Bernie Sanders was saying. There’s a general sentiment among Americans that we want our leaders to take care of domestic affairs more than foreign affairs. We don’t need to be involved with these interventionist regime-changing wars. We don’t need to be the policeman for all these countries.

I don’t believe in isolationism, but I do think we should shift our focus and do more at home: taking care of our debts, building more infrastructure, and tackling education and health care. 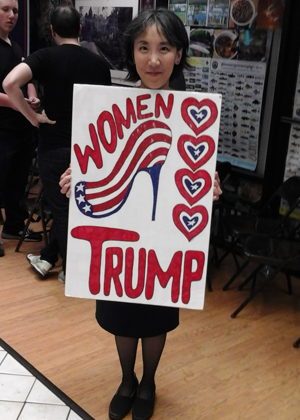 How do you feel about the proposed ban on immigration from Muslim-majority countries that was later blocked by the court?

I agreed with it 100 percent. I think we absolutely need to pause immigration in those countries where there’s a threat of terrorism and extremism. Why not strengthen our visa programs? I really think extreme vetting is in order. I know not all Muslims are terrorists or extremists or want to inflict harm, but we’ve got to do something about the extremism in our midst.

I think the travel ban would have been a very good thing in keeping Americans safe, and I’m disappointed again that there have been some setbacks with those proposals. I do think they're very wise and reasonable. Look at Japan. The prime minister said, "No, we’re not going to take in any refugees." I see these other countries say that they’re not going to do this, so why can’t we pause on immigration?

Do you plan to continue staying involved?