India Comes Out of Its Myanmar Shell 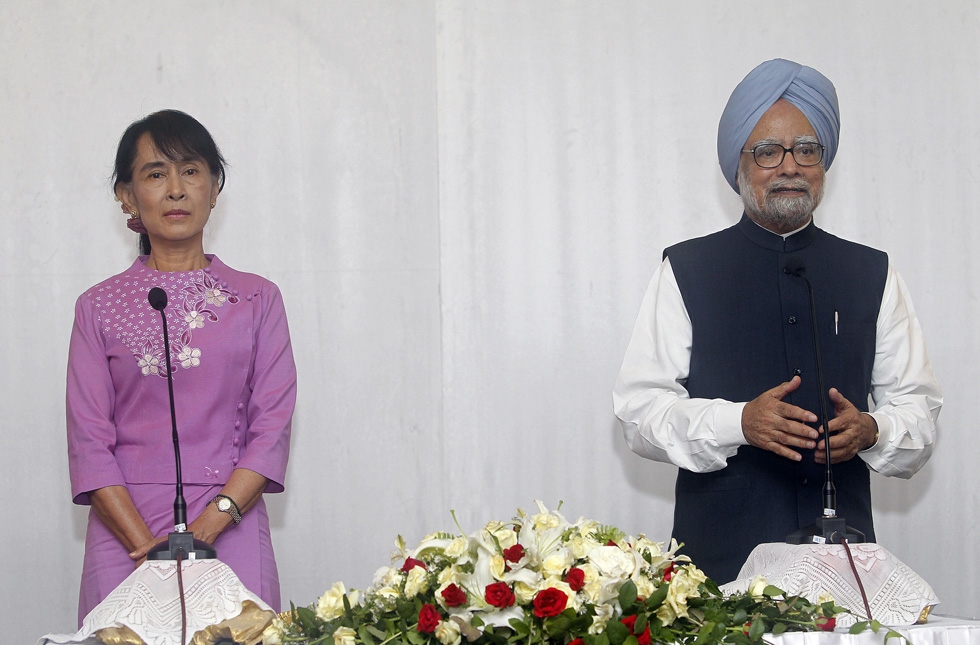 Prime Minister Manmohan Singh's recent three-day state visit to Myanmar was the first such visit by an Indian leader in 25 years. This gap marks a remarkable period of non-engagement at the highest levels for two countries whose historical relations go back millennia. In comparison, says former Indian ambassador to Myanmar Rajiv Bhatia, the heads of government of the two countries met eight times in a two year period in 1954-55.

This reflects the deep ambiguity that New Delhi has had to the military regime in Myanmar, a group reviled by India's elite but seen as essential to India's security by its strategists.

This was also reflected in India's official policy. India initially threw its support behind the pro-democracy movement led by Aung San Suu Kyi after the crackdown of 1988 and 1990. A few years later it declined to support economic sanctions against Myanmar and voted against international resolutions condemning the Yangon regime.

The reason was hard-nosed realpolitik. By the early 1990s the Kashmir insurgency was at its height and India had to pull paramilitary regiments out of its equally volatile northeastern region. The P.V. Narasimha Rao government needed a strategy to allow it to keep, in particular, the Naga insurgents of the northeast in check with just a few regiments. The answer: strike a deal with the Myanmar military to deny cross-border safe havens to Naga rebels. The price was to withdraw political support for Aung San Suu Kyi.

In security terms the deal worked perfectly. The Myanmar military even coordinated military operations with the Indian army to such an extent that the Nagas were to sue for negotiations in a few years. This cooperation continues. Thanks to the recent turnaround in Indo-Bangladesh relations, many of the northeast secessionist groups that had used Dhaka as a sanctuary have moved into Upper Burma. Part of Singh's agenda was to secure continued Myanmar support for action against these groups, a promise easily given by Myanmar President Thien Sien.

India privately pushed the generals to seek an accommodation with Aung San Suu Kyi. It also allowed the generals to make repeated private visits to India to visit Buddhist holy sites and "tame the beast within" through exposure to one of the world's most pacifist religions.

"The generals go to China for arms and India for salvation," was a common half-jest in New Delhi.

But the decison to free Aung San Suu Kyi and palpable fears in Yangon at the China's economic dominance of large swathes of upper Burma and areas like the Shan State, removed the contradictory pulls of democracy and security in India's Myanmar policy.

The re-engagement with Myanmar civil society was the other prong of Singh's policy. He carried a whole stack of cultural exchange, training programs, scholarships and university tie-ups to help rejuvenate Myanmar's educational system, a system badly damaged by the military's battles with student activists.

Singh also made the obligatory meeting with Aung San Suu Kyi, inviting her to come and speak with India. Going by his post-meeting descriptions to myself and other members of his press party, Singh and Aung San Suu Kyi looked to what the two could do in the future.

There was a little irony in knowing that his Congress Party headquarters is today situated in the same building that Aung San Suu Kyi and her mother lived for years in New Delhi, when the former went to college and the later served as ambassador to India.

The big question for many Burmese and Indians is whether India can help serve as an economic balancer to China. New Delhi has struggled to fulfill large promised infrastructure projects in Myanmar. Singh indicated where he saw India's economic advantage lay by bringing a business delegation consisting almost solely of the most dynamic private corporate sectors. There were no oil and gas executives, but plenty from telecom, manufacturing and value-added industries.

India, once the dominant neighbor of Myanmar, is probably behind China, Thailand and the United States in terms of profile and influence today. But, as Myanmar officials have privately told their Indian counterparts, the only external player that is wary of the reform process is China. And Beijing's concern is the degree of U.S. influence in Myanmar. Bringing in third countries which support the reforms, are seen as relatively benign by most Burmese and do not alarm Beijing is thus a key priority.