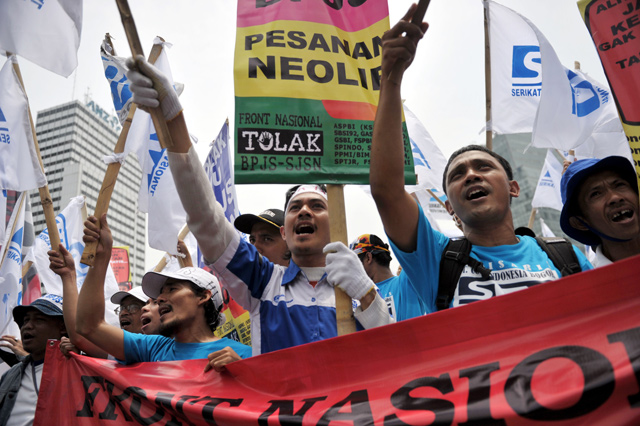 Indonesian workers display placards during a rally in Jakarta on Nov. 21, 2012, when thousands of workers took to the streets calling on the government to increase wages and end the practice of outsourcing manpower. (Bay Ismoyo/AFP/Getty Images)

While government officials are championing the move, Joko Widodo's policy decision is unlikely to to help Indonesia's simmering labor problem. The move to raise wages to appease workers is emblematic of the government's lack of a cohesive strategy in addressing systemic problems that keep unions striking, 70 percent of Indonesian workers trapped in the "informal sector," and investors wary of disputes threatening to shutter hundreds of factories — both domestic and internationally-owned.

Labor costs, of which minimum salaries are an important component, have increased at a faster rate in Indonesia than in any other South East Asian country. In fact, relative to average wages, Indonesia's minimum salary is one of the highest worldwide. Hence, the new minimum wage will intensify pressure on local businesses, since it comes in addition to hiring and firing laws they perceive to be restrictive. For example, Indonesian firms need to hire workers under a permanent work contract after twelve months, after which workers are entitled to considerable severance pay in case they are laid off.

Employers frequently circumvent such regulations by collaborating with so-called "outsourcing" companies. These companies shut down operations after eleven months but immediately re-register under a new name. The workers contracted by these companies are therefore employed for less than a year, and therefore are not entitled to permanent contracts. Of the 30 million people employed in the formal sector, around 20 million are hired through "outsourcing" companies, which have now become the main focus of labor activists.

In October, the government promised to ban such outsourcing practices for all but a few business sectors. Unions immediately rejected the plans as insufficient. Subsequently, wildcat strikes and activities have flared up in Jakarta and neighboring provinces in past weeks, during which groups forcefully enter companies to "investigate" outsourcing practices. During these "sweepings," workers of these companies are also often pressured to join protesters. This has had significant business ramifications. Last week alone, over a dozen factories were forced to shut down operations. Some companies have threatened to move their operations to other countries in the region. The government urged police to prevent and contain such actions, but the security forces seemed either unable or unwilling to curb these campaigns.

The majority of employees in the formal sector are hired through "outsourcing" companies because of the inflexibility of existing labor laws. The wage move may do little to bring more workers into the formal sector as employers seek to reduce labor costs by employing fewer and more casual workers.

It is possible to formalize labor and improve the business climate but this would require a concerted government effort to implement comprehensive reforms of the Indonesian labor code, including more flexible hiring and firing practices and sub-minimum wages for high school graduates and university entrants to the job market. To minimize the fallout of such labor market deregulation, the government would have to implement accompanying measures including unemployment benefit programs.

Yet, the government lacks the will and strategy to adopt and implement meaningful legal reforms that would not only improve the lives of formal workers but, more importantly, the economic prospects of the 70 percent of Indonesians workers trapped in the informal sector. The failure to formalize labor is one of the reasons for the growing inequality in Indonesia despite steady economic growth. By raising minimum wages and banning "outsourcing" practices, the Indonesian government has once more opted for a path of least resistance.

(Adapted from a brief published by Oxford Analytica.)

Michael Buehler is an Assistant Professor of Political Science at Northern Illinois University and an Asia Society Associate Fellow.