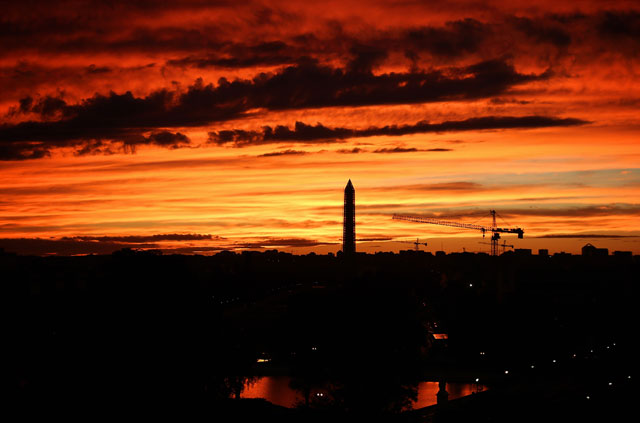 The sun sets behind the Washington Monument in Washington, DC on Oct. 7, 2013, the seventh day of the U.S. government's shutdown. (Alex Wong/Getty Images)

The domestic troubles in Washington have implications in faraway Asia, which worries Asian governments. If the U.S. economy and markets were to run into trouble over the government shutdown, China and Japan, as well as the rest of Asia, will suffer economic pain too. Asian nations may chastise Washington on its dysfunctional politics. But ultimately, they have little leverage over the U.S. domestic situation. It would be hard, in this case, to call them "leaders."

With the debt-ceiling deadline looming and no signs of a break in the embarrassing political impasse on Capitol Hill, Asia could be faced with an America with a flaky foreign policy in the long term. America's on-off self-imposed isolationism could become a problem for its external relations with allies, and Obama's no-show has presented a leadership gap in Asia that needs to be filled. Countries are increasingly looking to either China or "second-hand America" by relying on Japan or Australia as close allies of the U.S. But they are no substitute to having an actual US presence here.

The long term implication in Asia is that U.S. power might be seen as unreliable, which is very different from its status in the past where it acted as a stabilising bedrock for the region. The good news, however, is that the U.S. is still wanted. It has tremendous soft power and Obama has great charisma. But he needs to stop cancelling on Asia.

As the budget and financing standoff in Washington continues the risks inherent in the situation are increasing for economies around the world. With their vast investments in U.S. government bonds and their extensive trade relationships with the U.S., countries across Asia are particular anxious to ensure that the absurdities of America's political system do not become a calamity for the world economy, which would indeed be the result if the U.S. government defaulted on its financial obligations.

The U.S. government bond market is the bedrock of the world's financial system. Virtually all other assets are priced, one way or another, relative to U.S. Treasury bonds. Corporate loans, mortgages, letters of credit, trade finance, other bond markets, equities, all move in relation to the U.S. government bond market, the world's biggest, deepest, and most liquid financial market. With their intense economic and financial relationships with America, a rupture in the certainty of the U.S. keeping its commitments to its creditors would, in an instant, destabilize the economies and the financial system of Asia. In comparison, the financial crisis which erupted with the popping of the "Bush Bubble" would be like a mosquito on someone's nose.

The countries-big and small-across Asia have worked day and night to rebuild their economies from the calamities of war over the last six decades. The stability of the U.S. and its commitment to honor its financial obligations has been one of the keys to the enormous progress that the Asian economies have registered during that remarkable period.

Indeed trillions of dollars of savings of the Asian economies, which are the fruits of their great economic progress, are invested in the U.S. government bond market. Should the macabre political irresponsibility now gripping Washington whirl completely out of control, Asia would be particularly vulnerable.

It is against this background that we have had the rare convergence between China and Japan together calling on America to come to its senses. Today the annual meetings of the International Monetary Fund and the World Bank open in Washington. Financiers and policy makers from around the world are converging on D.C., and all will be repeating the same message which China and Japan have already delivered to the United States. The stakes have never been higher.