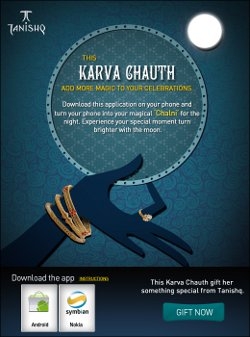 In the annual north Indian festival of Karva Chauth, married Hindu and Sikh women don’t eat or drink from sunrise to moonrise in the hopes that their husbands will be blessed with longevity. While some local traditions differ, most women look at the moon through a sieve or a cloth before eating or drinking.

Now, though, if one company has its way, they can use their own phones instead of a sieve.

Tanishq, a major jewelry brand in India under the Tata Group, has created a mobile application that turns the screen of your phone into a sieve through which women can see the moon.

The company says this service demonstrates the synergy of Indian culture with technology, and will help the brand engage with traditionally rooted modern women at a newer level.

Karva Chauth was observed on October 15 of this year.