Culture Matters: The Case of Devyani Khobragade and India-US Relations 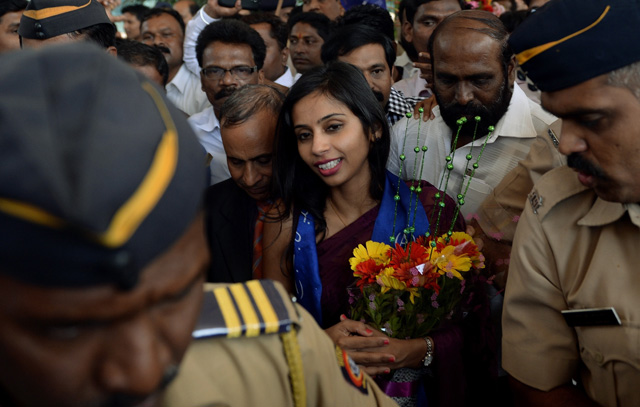 Indian diplomat Devyani Khobragade (CR), accompanied by her father Uttam Khobragade (CL) and surrounded by supporters and policemen, arrives at the domestic airport in Mumbai on January 14, 2014. (Punit Paranjpep/AFP/Getty Images)

With Indian foreign service officer Devyani Khobragade now back in her native country and the news frenzy surrounding her controversial U.S. arrest beginning to die down (especially in India, where it was front page news for almost a month), we can now reflect on the episode with some degree of dispassion and distance. Just how did this seemingly small blip in the annals of international relations nearly throw off-kilter a “defining relationship,” as President Obama described the bond between the two allies.

Even in the age of hyper-interconnectivity and the rapid globalizing of societies, cultural differences still cause major consternation.

Cultural misperceptions lie at the heart of this controversy. Focused on the letter of the law and the egalitarian values embedded in the American society, Preet Bharara, an American of Indian origin and the U.S. Attorney for the Southern District of New York, sought to remind Khobragade and the Indian diplomatic community that in America, everybody is equal under the law. By following up on the accusations made by Khobragade’s domestic employee, Sangeeta Richard, Bharara showed the concern for the underdog, a classic American value, as described by Kishore Mahbubani in his recent editorial about the incident.

By Indian reckoning, the highly public arrest of a diplomat, and the strip-search that followed, was a direct insult to Indian sensibilities. In some ways, it was particularly shameful as this was done to one of the few “dalit” members of the elite diplomatic corp. It had a similar level of potency as the 2009 incident that saw Henry Louis Gates, a distinguished African American Harvard professor, mistakenly arrested, causing a huge stir throughout the United States. As The Economist pointed out in a recent article, India felt that the treatment of Khobragade was not reflective of a partnership of two equals. Rather, it was almost as if India was treated as a “servant” or a second class citizen.

Could these seemingly contradictory values — an egalitarian application of the law, and a multi-layered attitude toward social hierarchy — have been reconciled through a different set of actions? It’s almost as though Bharara, who has gone after other prominent South Asians such as Rajat Gupta with vengeance, has taken the role of aggressive enforcer to teach his community a lesson. Recognizing that his actions could create a diplomatic row between the U.S. and India, what if his office had quietly pointed out to the Indian embassy the legal issues surrounding the visa application of Richard and given them a specific period of time to resolve the issue? He could have even allowed the Indian government to quietly recall Khobragade from her position in New York. He was clearly within his jurisdiction to indict Khobragade on the basis of the complaint he received, but if he had exercised greater cultural understanding of the issue, he might have behaved differently.

Similarly, cognizant of the legalistic culture of the American system, and aware of the issues surrounding the treatment of domestic workers in the U.S. (after all, a similar case had also been filed against the former consul general of India in New York, Prabhu Dayal), the Indian government should have informed all Indian diplomats based in the U.S. that this was a serious concern. Some of the options now under consideration, such as making the domestic workers employees of the Indian government rather than of the individual officers, could have been implemented long before this latest controversy.

Compared to the big issues — stalling of the implementation of the civil nuclear energy deal, complications of the retail sector reforms, and strains in naval cooperation between the two countries — the Khobragade episode is just a small pebble of irritation. Prime Minister Singh tried to emphasize this point at his recent news conference by saying that this minor hiccup will not jeopardize the long term partnership between the two nations. But, just about all the serious observers of this important bilateral relationship have been concerned that after the high point of signing the civil nuclear energy deal of the George W. Bush era, it is floundering.

As former Undersecretary of State for Political Affairs Nicholas Burns and others have pointed out, compared to the first term of the Obama administration when both Secretary of State Hillary Clinton and National Security Advisor Tom Donilon had keen interest in India, there is no one at the highest level of the government with the same level of commitment nowadays. The halting of economic reforms and India's defensive attitude at the most recent rounds of trade negotiations in Bali, along with the serious slowing down of Indian economy, has also made the American business leaders wary of the country.

It is clear that while this relationship has been deemed important, it is in reality not very deep, reflecting the fact that it opened up only in the mid 1990s, after a long 30-year hiatus marked by deep mistrust on both sides. The Khobragade incident highlights the weakness of the relationship. If the relationship was on a stronger footing, such a minor issue would not have thrown the bond off balance in such a deep way.

As India prepares for national parliamentary elections in the next four months ushering in new leadership — Prime Minister Singh will not run for the third term — and as President Obama contemplates his global legacy in the waning years of his second term, it would be wise for both countries to put this relationship on the front burner once again. We need to make sure that reactive actions of both countries in the Khobragade incident are not repeated anytime soon. The world needs a strong and healthy relationship between the two largest democracies.