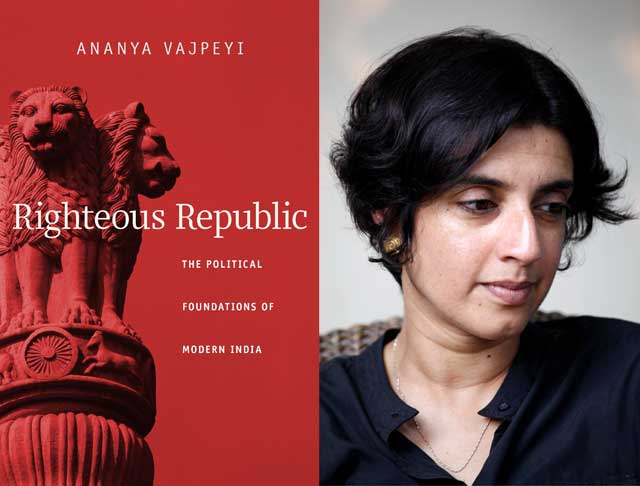 In her new book, Righteous Republic: The Political Foundations of Modern India, scholar and historian Ananya Vajpeyi offers a fresh perspective on the political traditions which informed the founders of the modern state of India, with a particular focus on the Indian jurist and political leader B.R. Ambedkar, who was instrumental in the drafting the Indian Constitution. Vajpeyi researches beyond widely understood Western political traditions and into the influence of India's own rich knowledge traditions of two and a half thousand years.

Vajpeyi discusses the book, B. R. Ambedkar, and his role in founding of the modern Indian state with Professor Partha Chatterjee of Columbia University at Asia Society New York on Wednesday, November 7, as part of the Asia Society series "Makers of Modern India."

Of the five founders discussed in this book, B.R. Ambedkar (1891–1956) may have had the most agonized relationship to modern India's quest for an authentic self. Born a Mahar in Maharashtra, he grew up painfully conscious of the distance at which caste society kept the Untouchables. In the course of his remarkable life, he came to identify three men as his teachers — Siddhartha Gautama, the Buddha; Kabir, the medieval poet; and Jotiba Phule, the 19th-century Maharashtrian social reformer. For Ambedkar to arrive at a place from which he could embrace these three figures meant engaging with a vast spectrum of religious and political traditions that had appeared on the subcontinent from its earliest antiquity to its most recent colonial moment. It also meant working out what each of these traditions — Buddhism, bhakti radicalism, and non-Brahmin egalitarianism — had to offer to Untouchables by way of a bridge across the terrible chasm separating them from dominant Indian conceptions of self and sovereignty. For whatever Ambedkar might have claimed about his desire to break entirely with Hindu India, ultimately we cannot but regard the man as straining to build India anew, in such a way as to redefine the very basis of what it was to be Indian, away from the differential and hierarchical mechanism of caste, toward an inclusive and integrating idea of citizenship.

This new India — whose key text, the Constitution of 1950, Ambedkar shepherded into its inaugural form — had to be imagined on the basis of a kind of selfhood that would appeal as much to Hindus as to minorities, to upper castes as to Sudras and Untouchables, and to those in the mainstream as to those on the margins. Ambedkar tested every big and small, old and new religion available to Indians, trawled the texts and tenets of Hindus, Buddhists, Muslims, Sikhs, and Christians, and indeed made himself an entire career as a scholar of comparative religions alongside his enormously busy public life as a mass leader, a politician, and an intellectual. He was far more systematic than Gandhi as a self-taught student of different religions in India, far more thorough than Nehru as an amateur historian of India, far more imaginative and conflicted than the talented Tagores in his attempt to identify or construct an acceptable past for the emerging nation. Even as he stood every received theory about the origins and evolution of the caste system on its head, he declared his fervent intention to "annihilate" caste. It is no wonder that Ambedkar remains the least understood of the great moderns that India produced, and who produced India.

In this chapter, the focus is on Ambedkar's conversion to Buddhism in the last months of his life (October–December 1956) and on his final book, published posthumously, The Buddha and His Dhamma (1957). Sangharakshita's riveting biographical account Ambedkar and Buddhism (1986) describes Ambedkar's journey toward Buddhism, from a book about the Buddha he received as a prize at age 16 from his Brahmin high school teacher Arjun Keluskar, to the conflict with Gandhi over temple entry and separate electorates for Untouchables throughout the 1930s, to his increasing contact with Sri Lankan, Burmese, Japanese, and other Asian Buddhist groups from 1950, culminating in Ambedkar's formal conversion, together with that of some 400,000 of his Untouchable followers, in 1956. Almost all major contemporary scholars of Ambedkar's life and works, including Zelliot, Rodrigues, Omvedt, Fiske, Fitzgerald, Tartakov, Jaff relot, Nagaraj, Jondhale, and Gokhale have had something to contribute to our understanding of Ambedkar's conversion, and his founding of a sect of modern Indian Buddhism, Navayana, the "New Way."

Why, then, yet another attempt to examine Ambedkar's stance with regard to his neo-Buddhism? One of the hazards of entering into the history of Indian nationalism is that most accounts of Gandhi, say, will compare his traditionalism with Nehru's modernism; most accounts of Ambedkar's heterodoxy will insist on Gandhi's orthodoxy; Rabindranath's creativity and whimsy are easy contrasts to Ambedkar's prosaic and pragmatic approach. Thus it becomes difficult to keep several of these contemporaneous, equally important, and rather complex figures within a single frame of inquiry and judgment. It's as if we must take sides; condemn one in order to extol the other; separate out the secularists from the believers, the radicals from the reactionaries, the thinkers from the doers, and so on. I am not willing to take this approach. I do want to judge and analyze the five founders I have chosen, but not at each other's cost. To my mind, there is nothing to be gained in building up Ambedkar if most of one's effort is expended in tearing down Gandhi. Today, in the early part of the 21st century, we live as much in Gandhi's India as we do in the India of Nehru, Tagore, or Ambedkar, in certain ways; in other ways, India has pursued directions that none of these men could ever have predicted or endorsed.

Gandhi and Rabindranath, Gandhi and Nehru, Gandhi and Ambedkar, all had serious and long-running disagreements and conflicts with one another, which in my view only enhance the value of each of their legacies for independent India, rather than detracting from the stature of any of them individually. I turn to the question of why Ambedkar became a Buddhist, and of the nature of the new Buddhism that he authored, within a common framework of inquiry in which I have placed all the figures discussed in this book. This framework, as should be clear by now, encompasses the five founders in their engagements with particular texts of premodernity, examines the categories of thought that were central to these engagements, and traces how these categories underlie modern India's search for the self, the "swa" in swaraj. For Ambedkar, the relevant premodern texts were drawn from the Buddhist canon, especially the Dhammapada, in Pali. I argue that the key category that accounts for his close reading of these early texts of Indian Buddhism is duhkha, or suffering.

However, Ambedkar does not simply appropriate the ancient religion of Buddhism for purposes of strengthening the political identity and self respect of a modern community, the Untouchables. Nor is his turn to Buddhist tradition in search of the self the least bit easy for him, since he understands Untouchable subjectivity to be fundamentally at odds with "tradition" as such, given his perception of an upper-caste — in fact Brahmin — Hindu monopoly over the very idea of tradition throughout the recorded history of India. Moreover, Buddhism as he creates it anew, his Navayana, so deeply eviscerates Buddhism as it has been practiced in any number of its existing sectarian interpretations within and outside India that it almost becomes something else altogether, a religion all right, but hardly a type of Buddhism. He renders Buddhism unrecognizable as itself. Most significantly, for Ambedkar, duhkha is not individual suffering rooted in karma but rather social suffering, and it springs from caste. In all these ways, Ambedkar's Buddhist moment is quite startlingly different from Gandhi's engagement with the Bhagavad Gita, Tagore's with Kalidasa, Abanindranath's with Mughal and Rajput art, and Nehru's with Aqoka’s edicts and pillars.

And yet my claim is that duhkha, Ambedkar's category, shares with Gandhi's ahimsa, Rabindranath's viraha, Abanindranath's samvega, and Nehru's dharma the peculiar quality of being a hybrid between non-modern and modern meanings of the term; an apparently archaic concept deployed at an utterly unprecedented historical conjuncture for pressing political reasons; the distillate of centuries of thought about the self percolated through the filter of a sovereignty in crisis on account of colonialism. Ambedkar was undoubtedly at odds with his eminent contemporaries, both because he was an Untouchable and because he was so continuously and acutely conscious of being an Untouchable. But he was also of a piece with his peers: attending to history and refashioning history, immersed in tradition and in revolt against tradition, in mourning over a lost self and eagerly searching for a new self. The thread that keeps Ambedkar tied to India, even as he wants to smash India into smithereens and reconstruct it from the ground up, is his abiding commitment to solving the mystery of duhkha, the suffering of the people — not just his people, the Untouchables, but all people, the people of India.

Excerpted from Righteous Republic: The Political Foundations of Modern India by Ananya Vajpeyi, published by Harvard University Press. Copyright © 2012 The President and Fellows of Harvard College. Used by permission. All rights reserved.