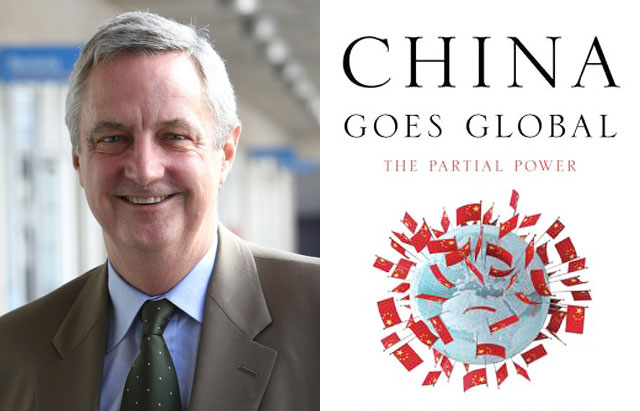 In his new book China Goes Global—The Partial Power veteran China-watcher and Director of the China Policy Program at George Washington University David Shambaugh focuses on China's remarkable re-emergence on the world stage in recent years as it flexes its economic muscle and "soft power" in regions as diverse from one another as Latin America, Africa, and the Middle East. Yet while acknowledging China's higher profile in many corners of the globe, Shambaugh also suggests that its actual influence is still somewhere below genuine superpower status — hence the "partial power" of his book's title.

Shambaugh will expound on these and other ideas at Asia Society New York on Wednesday, February 27, when he will be joined in conversation by Orville Schell, Arthur Ross Director of Asia Society's Center on U.S.-China Relations. For those who can't attend the program in person, a live webcast will be available on AsiaSociety.org/Live at 6:30 pm ET.

In the following excerpt from Chapter One of his book, Shambaugh provides an up-close, eyewitness account of what it was like to be in Beijing on October 1, 2009, the sixtieth anniversary of the People's Republic, when a very public display of military might conveyed an unmistakable message to anyone watching.

Sitting in the reviewing stand on the north end of Tiananmen Square on the occasion of China's national day and the sixtieth anniversary of the People's Republic of China on October 1, 2009, under the watchful eye of Mao's giant portrait on Tiananmen Gate, I had an uneasy feeling. There, before my eyes, were the stark contradictions of China's rise.

As I watched the columns of ten thousand goose-stepping soldiers marching past in tight formation, touting automatic weapons with heads cocked toward the ofﬁcial reviewing stand, followed by massive trucks ferrying huge intercontinental ballistic missiles and stealthy cruise missiles, modern tanks, rocket launchers, artillery, armored personnel carriers, with jet ﬁghters and bombers cruising overhead, I did some live commentary by cell phone for CNN (which was beaming the images worldwide). The anchorwoman in Hong Kong asked for my impressions. I observed that the orchestrated military display — an eerie ﬂashback to similar Soviet and North Korean martial displays — was a perfect metaphor for the contradictions that China's rise engendered. On the one hand, the parade was primarily intended for domestic consumption — for the 1.4 billion Chinese who had been told for 60 years that their nation must stand tall in the world. Carefully choreographed and practiced with meticulous precision over the previous year, for the Chinese audience it was meant to assuage the national craving for international respect and demonstrate that China now stood tall and had retaken its rightful place as one of the world's powers. On the other hand, the military hardware was meant to impress the world with China's new hard power — offering a complete contradiction to the government's repetitive mantra about its "peaceful rise" and benign intentions.

The hour's display of military might was presaged by China's President Hu Jintao cruising the Avenue of Heavenly Peace in an open-top Red Flag limousine reviewing the troops and barking out words of encouragement: Tongzhimen hao! Nimen xinku le! (Greetings, comrades! You're suffering!). Hu's steely demeanor ﬁt the seriousness of the moment. After the weaponry rolled past, we witnessed a second hour of ﬂowered ﬂoats of propaganda slogans, singing children, dancers, colorful ethnic minorities, and other displays of China's softer side. This contradictory collage of images was jarring and made me wonder what messages the Politburo and czars in the Propaganda Department of the Chinese Communist Party (CCP) wished to convey to the world.

I also reﬂected on the extraordinarily intense security dragnet that had blanketed Beijing over the previous month. Police and special forces were deployed and patrolled neighborhoods, roads into the capital were blocked; migrants and dissidents were rounded up; foreigners' IDs were checked and double-checked; manhole covers throughout the city were taped shut so no terrorists could hide inside and spring forth to launch a surprise attack; and checkpoints were set up throughout the city. Along the parade route, all ofﬁces were closed for a week before and several days afterward while residents in ﬂats facing onto Chang'an Avenue (where I lived) were told to stay away from their windows on the day of the parade. On October 1, the whole city went into lockdown — scores of police and threatening-looking commando squads dressed in black were posted at intersections, streets were blocked to trafﬁc, and people were not permitted to go within a one-kilometer perimeter of the parade route. Those fortunate enough to have an invitation to the event were ferried to Tiananmen Square by special buses from a staging area at the Workers Stadium.

The only time I had experienced such intensive security in Beijing was in the aftermath of the June 4 "massacre" in 1989, and I could not help but think there was a connection between the two; the 2009 parade (and the 2008 Olympics the year before) afforded China's security services with opportunities to sharpen their regimens so there would never be a repeat of 1989. But, more deeply, I wondered: If the Communist Party is so proud of its achievements and 60 years in power, what is it so afraid of? Why the need for such intensive security? The answer is that the authorities genuinely feared sabotage of the military equipment or disruption of the festivities by "ethnic separatists" or domestic terrorists; either would have left a very dark stain on the government's image and would expose the undercurrent of bubbling discontent that ripples throughout Chinese society. But it belied a deeper insecurity on the part of the regime. The juxtaposition of pride and patriotism, on the one hand, mixed together with the Party's deep insecurities and the obsession with control, on the other, spoke volumes to me about China's current conﬂicted (and insecure) condition.

Following the two-hour spectacle and after comparing impressions with American Ambassador Jon Huntsman and German Ambassador Michael Schaeffer back at the Workers Stadium staging area, I mounted my trusty bicycle and navigated the Beijing neighborhoods and circumvented roadblocks back to our apartment (where I was spending the year on sabbatical). As I pedaled through Chaoyang District I could not help but compare that exhibition with another spectacle I had witnessed just 14 months before in Beijing: the closing ceremony of the 2008 XXIX Olympiad. Sitting with my son Alex that warm summer evening in the "Bird's Nest" Olympic Stadium, we were treated to a demonstration of China's "soft power": several hours of creative choreography, breathtaking theatrics, colored ﬂoodlighting, as the athletes of 204 nations and territories swayed on the stadium inﬁeld to the Chinese theme of "One World, One Dream." It was an impressive display (as were the opening ceremonies). It left me hoping that, having had its moment in the international spotlight during the impressive and successfully managed Olympic Games, China might be able to shed its 60-year national identity of victimization by foreigners and move forward in the world with a new conﬁdence.

One year later, having just experienced the martial display of China's "hard power," as I bicycled home through Beijing's neighborhoods I reﬂected on these twin events — the ﬁrst of which reassured the world, the second of which frightened the world. The juxtaposition left me wondering which of these two Chinese "faces" would the new China project on the world stage. The answer came quickly. Over the course of the next year (2010), which has become known as China's "year of assertiveness," the Chinese government took a number of disconcerting diplomatic actions toward its Asian neighbors, the United States, Australia, and the European Union. Collectively, as I opined in a newspaper op-ed at the time, the "Chinese tiger was showing its claws." In the wake of these actions, during 2011–12, China recoiled and recalibrated its diplomacy somewhat. It undertook a campaign of diplomatic reassurance toward these countries and launched a multifaceted soft-power and public-diplomacy drive aimed at improving China's image worldwide. Yet, embedded in these events and personal vignettes lie the complexities of China's "rise."