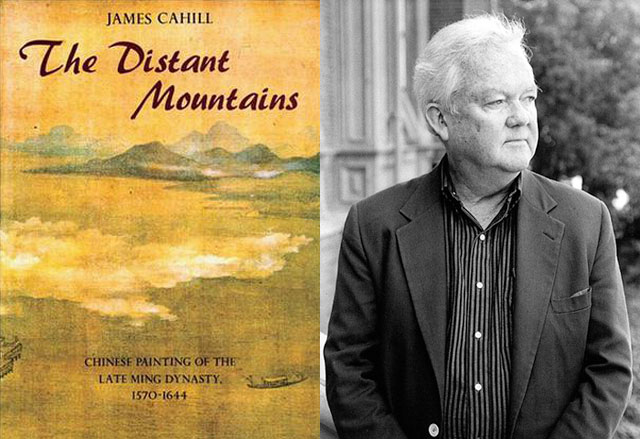 "The Distant Mountains: Chinese Painting Of The Late Ming Dynasty, 1570-1644" (Weatherhill, 1982) is one of the many works on Chinese painting by the art historian James Cahill, who died on February 21, 2014. (Cahill photo: College Art Association)

On the morning of February 14, 2014, the field of East Asian art history lost a towering figure. For more than 50 years James Cahill made immense contributions to the study of the history of Chinese painting and was among the prominent pioneers in his field in the West. Asia Society was the beneficiary of his groundbreaking scholarship many times. Among other contributions to the institution, he was guest curator for our exhibitions Fantastics and Eccentrics in Chinese Painting (1967), and Scholar-Artists of Japan: The Nanga School (1972). Renowned as an engaging lecturer with a keen mind and encyclopedic memory, Professor Cahill was also a prolific writer. His books and articles played a critical role in making Chinese painting the subject of serious study. His famous survey Chinese Painting (Skira, 1960) became indispensable for American students encountering Chinese art for the first time.

James Cahill was Curator of Chinese Art at the Freer Gallery of Art in Washington, D.C. from 1956 until 1965; he later became a beloved professor of the History of Art at the University of California, Berkeley until his retirement in 1994. His erudition made him an ideal ambassador for the field. In 1973 he was a member of the first group of U.S. art historians to visit the People’s Republic of China. His many honors and awards include a Lifetime Distinguished Teaching of Art History award and Distinguished Lifetime Achievement Award for Writing on Art, both awarded by the College Art Association; and the Charles Lang Freer Medal in recognition of a lifetime of seminal contributions to his field.