Looking Ahead: Manufacturing – Australia’s future is not its past | Asia Society Skip to main content

Looking Ahead: Manufacturing – Australia’s future is not its past 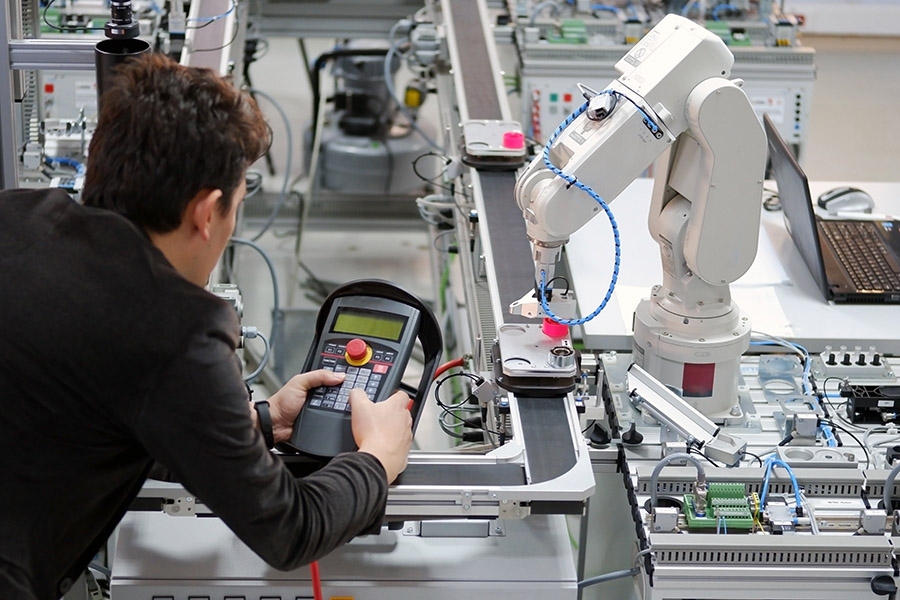 If the past is another country, the future of Australia’s economy after COVID-19 will be a different universe. It’s often said that with every crisis comes an opportunity, but few have the far-reaching impact and implications of a global pandemic.

This crisis challenges us to reshape our economic direction for years, possibly generations, to come with a renewed focus on our region – Asia. Not only has COVID-19 exposed the gaps in Australia’s manufacturing supply chains, but it has also demonstrated the vulnerability of a commodity-based economy to external shocks and the need to reverse the hollowing out of manufacturing capability.

In capitalising on this opportunity, no one could claim that our past experience has been an unalloyed success. While we have enjoyed almost 30 years of continuous economic growth, this record has been marred in more recent times by a productivity slowdown, wage stagnation, and increasing social inequality. And now we must face the prospect of a deep recession.

Moreover, we have had to endure a decade-long debate over climate change where evidence mattered less than ideology. We have become bystanders to the existential impact of global warming, species destruction, and environmental degradation, including the recent catastrophic bushfires and coral bleaching on the Great Barrier Reef.

If there is a single factor linking the constituent parts of this experience, it is Australia’s overwhelming reliance on the export of unprocessed raw materials to drive growth and prosperity. However sophisticated the method of resource extraction, the truth is we sustain a first-world lifestyle with a third-world industrial structure.

This was the message of the Harvard Atlas of Economic Complexity, which ranked Australia at the bottom of the OECD for ‘complexity’, as measured by the diversity and research intensity of its exports. It is also the logical endpoint of the theory of ‘comparative advantage’, which asserts that we maximise gains from international trade by exploiting our abundant natural endowments in return for imported consumer goods from places that produce them more cheaply.

Even if this theory was true in the past, it no longer holds in a world where manufacturing is undergoing massive transformation in a ‘fourth industrial revolution’, encompassing robotics and automation, artificial intelligence, data analytics and machine learning. Future success will depend on turning comparative advantage into ‘competitive advantage’, which is driven by knowledge and ingenuity.

For economies like Germany, Switzerland, Korea and Japan, manufacturing and related services underpin high-productivity, high-skill jobs. Competitive advantage is achieved not through low-cost mass production but through ‘smart specialisation’ in global markets and value chains, with an unrelenting focus on quality, design and innovation.

By contrast, Australia has allowed its manufacturing sector to decline to dangerous levels, now down to around 6 per cent of GDP. Even many of the companies that managed to survive the removal of tariff protection in the ‘80s and ‘90s ultimately succumbed to the high dollar associated with the mining boom.

Consequently, Australia’s manufacturing deficit is increasing year on year, particularly in R&D-intensive ‘elaborated transformed manufactures’ (ETMs). While ETM imports have more than doubled to around $215 billion over the last 25 years, ETM exports have increased only marginally to $36 billion, with the widening deficit most acute in engineering products (see below). 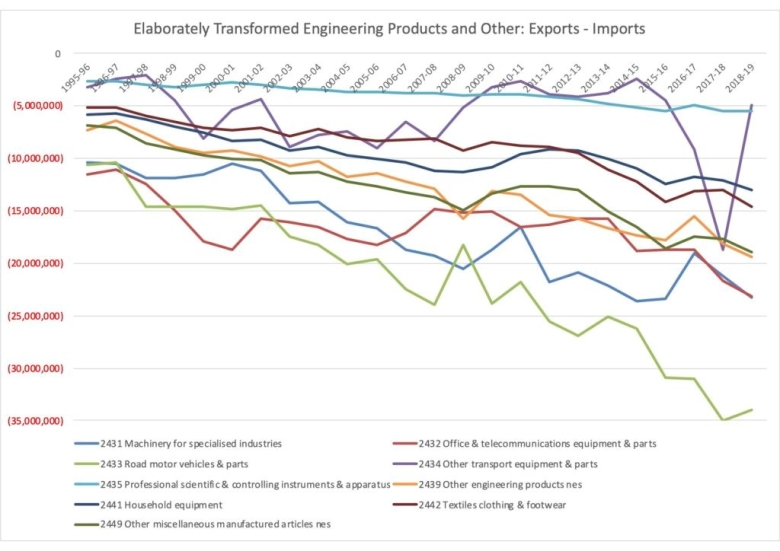 Despite much talk of the post-mining boom transition to a more diverse, knowledge-based economy, current examples of Australian manufacturers with a global presence are few and far between. The problem lies not in any lack of talent but the absence of a coherent and effective national industrial strategy.

While the COVID-19 crisis has exposed and accentuated this problem, it also provides the opportunity for a fundamental redesign of our outdated industrial structure. During the ‘hibernation’ phase of the crisis, the Coalition Government is doing what it can, largely with Labor’s support, to retain jobs, strengthen the social safety net, and ensure production of urgently required medical equipment.

However, in planning for the longer term, Prime Minister Scott Morrison has also made reference to the bridge that must be constructed to a “better, stronger economy”. Industry Minister Karen Andrews has argued that Australia must “compete on value, not cost”. And Treasurer Josh Frydenberg has raised the prospect of industry support that is “niche, targeted and purposeful”.

This is a major economic challenge, and there is now every chance that in meeting it Australia may be able to achieve the political consensus which characterised the Hawke-Keating reforms of the ‘80s and ‘90s. If we are doubly fortunate, this consensus could even extend to genuine climate action, where it has been so obviously lacking up to now.

To this end, the Prime Minister has established a taskforce, chaired by former Dow CEO Andrew Liveris and comprising both industry and union leaders, to identify the steps that should be taken to rebuild and reinvent Australia’s manufacturing capability. The following are some essential steps that might be considered.

First, we must overcome the fragmentation and under-resourcing of institutional policy-making in Australia. A new National Industrial Strategy Commission, or similar body comparable with those in other advanced economies, could develop national priorities in consultation with industry sectors to grow ‘industries of the future’, based on new technologies and business models.

The initial task of this Commission would be to undertake a ‘knowledge foresight’ to identify areas of current and future competitive advantage for Australia, as well as gaps in domestic supply chains. Clearly, enhancing self-sufficiency is not incompatible with a commitment to a more complex globalised economy, particularly one where we are increasingly integrated into the Asian region.

Such a foresight exercise would involve a comprehensive analysis of markets, talent and technology, and would map areas of competitive advantage that match demand prospects in our key trading partners. As the ‘Australia in the Asian Century’ report noted in 2012, we can and should be much more than a supplier of raw materials to our region.

Second, a more systematic approach is required to deepen collaboration between industry and research organisations, possibly around the CSIRO’s designated ‘national missions’. This will require the Government to reverse the decline in public funding of research and innovation, now far below the OECD average and still falling as a share of GDP.

In addition, the national missions will require an implementation strategy at the enterprise level, or they will simply remain abstractions. This might take the form of industry-led innovation hubs, again a successful model elsewhere, which would also have the benefit of attracting foreign direct investment, particularly with a shift from indirect tax incentives to more direct targeted programs.

Third, we should not overlook the contribution of entrepreneurial startups to economic renewal, including integration of the digital and physical dimensions of manufacturing, which is a key feature of Industry 4.0. Governments everywhere facilitate startups, and scaling up, through support for innovation precincts in cities and regions.

Arguably, Australians have a unique capacity for the design and creative thinking that drives as much and often more value for manufacturing than the production process itself. Support for innovation precincts should include provision of ‘maker spaces’ for testing, prototyping and launching new product ideas.

Fourth, the Government can make a big difference for small and medium enterprises with public procurement policy. Too often we see local tenders overlooked in favour of large international companies on a narrow ‘value for money’ basis, when these large companies themselves might owe their existence to another country’s procurement policy.

As well as providing public infrastructure, governments can facilitate private investment in key infrastructure, such as an efficient freight and ports system for manufacturing logistics and supply chains. Infrastructure Australia has recently noted that our trading connectivity would be greatly enhanced by a new East Coast deep-water container port able to accommodate the global shift to ultra-large container vessels.

Fifth and finally, industrial transformation will depend on the adequacy of our workforce and management skills. This will require measures to compensate for the COVID-19 hit to international student revenues which cross-subsidise university domestic teaching and research, as well as the earlier damage to Australia’s vocational education and training system from market contestability.

These measures may include support for new university business models which not only encourage industry-research collaboration but also enable international students to gain access to internships and career paths in Australia. It’s important that education adds value to the domestic economy, along with a greater emphasis on high skill migration and technology transfer.

The Government’s ‘whatever it takes’ intervention to safeguard people’s lives and livelihoods is clearly justified, but concern has been expressed that this will entail an unprecedented level of public debt. The history of wars and crises tells us that the only way to pay off such debt is to create a new economic growth engine. That new growth engine will be advanced manufacturing.

While Australia is unlikely to grow manufacturing on the scale of Asia’s largest industrial powerhouses, we are well placed to develop knowledge-intensive, low carbon emissions capability in key segments of global and regional value chains. Success will depend on an active partnership between government, industry and research organisations to reposition Australia’s economy for the challenges ahead.

Roy Green is Emeritus Professor at the University of Technology Sydney, Chair of the Advanced Robotics for Manufacturing Hub, and Chair of the Port of Newcastle.