Inside Xu Bing's 'Landscape of Shadows' 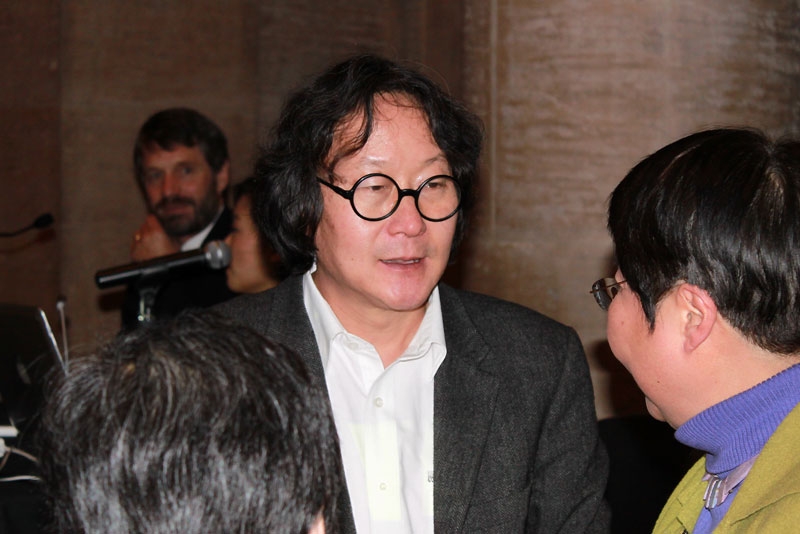 SAN FRANCISCO, January 28, 2011 - Chinese artist Xu Bing, recipient of a MacArthur Foundation "genius" award in 1999, unveiled a fascinating new direction in his most recent works before a packed crowd here at the Asian Art Museum. The talk was co-presented by the Museum and Asia Society Northern California.

Perhaps best known for creating an entirely new lexicon of made-up Chinese characters, Xu has long been regarded as a master in manipulating meaning and language.

Xu introduced his audience to a recent series of multimedia works in which he employs decidedly unconventional means to recreate Chinese landscape painting. In that genre, an artist traditionally puts brush to paper and the ink bleeds to creates a characteristic "misty" effect associated with Chinese landscapes. The classic approach asks the audience to consider the artist’s relationship to nature, as well as a sense of peace, order, and balance achieved.

In Xu's new work, he replaces paper and ink with what he described as a sort of imperfect "milky glass." The order and discipline manifest on the work's surface (i.e., the glass) are balanced by what he calls "the chaos behind it"—repurposed tree branches, bricks, metal scraps, and other bits of detritus. Placed behind the glass, the materials cast shadows across the glass that recall traditional Chinese landscapes.

But with traditional materials and techniques abandoned, is the work still Chinese? Xu argued that it is. "My method cannot be applied to Western works," he explained, "because those are done in oil paints and do not show the same use of shadow, which is attributed to the difference between Chinese and Western paintings in terms of their relationships to nature."

Xu describes his work as a "landscape of shadows," or something that isn't always as it first appears. Following rules and breaking rules can be one and the same, depending on the result, and breaking with tradition isn't necessarily the same thing as repudiating cultural origins.

Xu's work has taken a number of other directions as well. One new series plays with the symbology of internationally recognized icons (e.g., the "walk" symbol used in traffic lights) as a limitless form of cross-cultural communication, which the artist uses in one work to tell a story about a man going to the airport. For Xu, these icons are the language of modernity itself, and can be "read" by anyone, regardless of his or her other linguistic abilities.

An audience member who identified himself as a Japanese venture capitalist was particularly excited by this project. He claimed to have made millions of dollars with an application that enabled Japanese texters to use a simple heart symbol in their messaging. With Xu's new lexicon, he said to the artist, "Maybe we could go into business together?" Xu was a good sport, retorting, "If your business is a good one, we can definitely talk!"