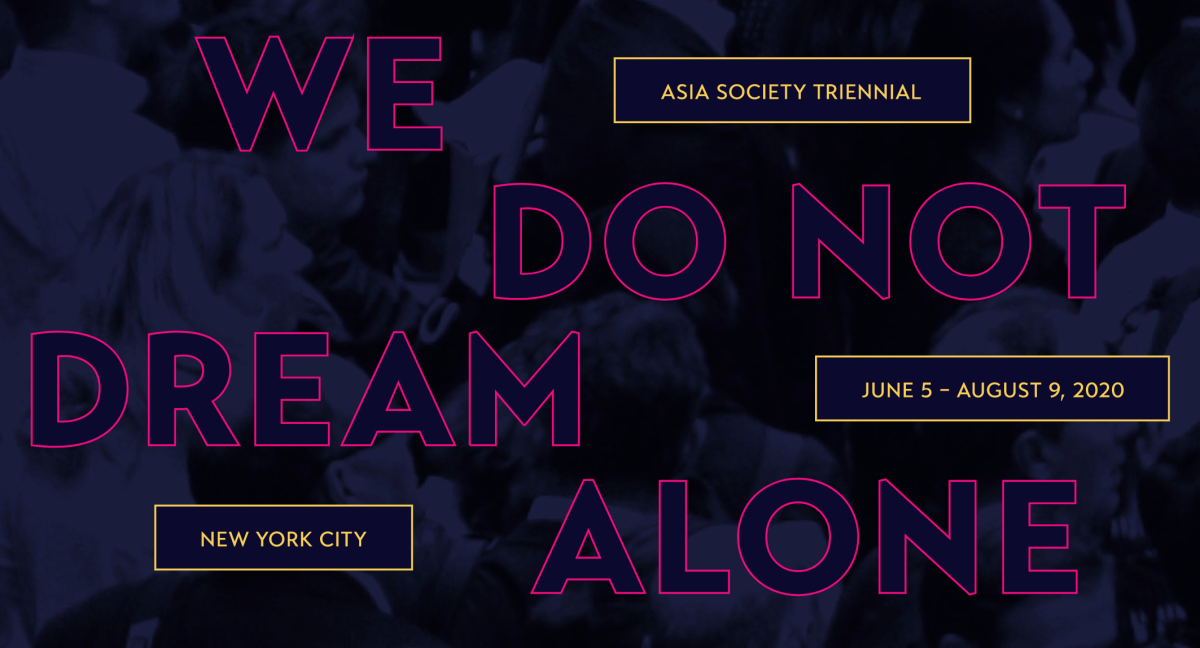 New York, NY; December 3, 2019. The inaugural Asia Society Triennial—a multi-venue festival and first of its kind in the United States devoted to celebrating Asian contemporary art, ideas, and innovation—will feature as its centerpiece an exhibition entitled We Do Not Dream Alone, on view at venues across New York City from June 5–August 9, 2020. The exhibition will present approximately 40 artists and include more than 18 newly commissioned works by participants from Asia and the Asian diaspora, many participating in a major New York museum exhibition for the first time. Cocurated by Boon Hui Tan, Vice President of Global Artistic Programs and Director of Asia Society Museum, who is also the Artistic Director of the Triennial, and Michelle Yun, Senior Curator of Asian Contemporary Art and Associate Director of the Asia Society Triennial, the exhibition will open to the public on Friday, June 5, 2020.

Commissions and partnerships for the Triennial are still in development and the complete list of artists and venues will be announced in early 2020. The following is a partial list of artists (in alphabetical order) who have been invited to create new projects for inclusion in the exhibition:

The initiative seeks to gather artists who are confronting timely issues of global concern. “Societies have been splintered by forces, both natural and political, that are exerting pressure on the ties that historically bound individuals, cultures, and communities. These conditions challenge artists to dream and imagine worlds sometimes serene and sometimes nightmarish,” says Mr. Tan. “Asia is not an isolated physical realm. It is not ‘out there’; it is here and everywhere. We are interconnected, and artists are key actors in reimagining these ties and how they enrich and help us make sense of our lives. We chose these artists because of their engagement with international affairs and their ability to transcend borders and other divides. Art in this moment must demonstrate our common humanity and express our ability to dream together. We designed the Triennial to foster conversations in art, policy, education, technology, and innovation. The exhibition and programs affirm the power of the artistic voice and its critical role in society today.

The Triennial’s complex exhibition structure required a nuanced perspective. “Asia Society’s purview across the region and the diaspora represents a diverse representation of cultures, religions, ethnicities, political ideologies, and identities,” says Ms. Yun. “Consequently, as we considered which artists to include in our first Asia Society Triennial, we initially cast a wide net. Ultimately, we focused our selection on artists whose practices actively and uniquely engage timely, yet universally accessible, issues relating to democracy, identity, gender equality, and sustainability. We are especially pleased to be collaborating with such a dynamic group of artists and venue partners to premiere newly commissioned works, many of them site-specific to New York City.”

“The Asia Society Triennial advances the legacy of the Museum as a cultural vanguard for artistic voices from and about Asia. This new international platform builds on more than six decades of institutional heritage of diplomacy and systematic engagement between Asia and America,” says Agnes Hsu-Tang, Ph.D., Executive Chair of the Triennial and Chair of the Triennial Steering Committee. “We are galvanized by the enthusiastic participation of leading thinkers, policy makers, educators, and partnerships with fellow New York institutions to further proliferate the ideas and innovations that form the intellectual core of the Triennial.”

Boon Hui Tan is Artistic Director and cocurator of the Asia Society Triennial 2020. Since 2015, he has been Vice President for Global Artistic Programs and Director of Asia Society Museum, where he leads the organization’s global arts and cultural activities spanning visual arts, performing arts, literary arts, and film. Prior to this, he was Assistant Chief Executive (Museum & Programs) at the National Heritage Board (NHB) in Singapore, where he oversaw exhibitions, programs, and outreach events across the Board’s museums, institutions, and divisions. In 2015, he was Artistic Director for Singapour en France, le Festival, the largest multidisciplinary presentation of contemporary culture from Singapore and Southeast Asia in France. As a curator and programmer, his research and writing interests focus on the contemporary artistic expressions of Southeast Asia and Asia and the remaking of traditions among artists of today. Tan was a founding board member of the International Biennial Association. He was Director of the Singapore Art Museum from 2009 to 2013, where he led the transformation of the museum into a contemporary art institution focused on Southeast Asia and assembled the largest public collection of contemporary art from the region. He was concurrently Director of the Organising Secretariat for the Singapore Biennale 2011. He initiated the regional focus and group curating approach which became the distinguishing feature of the Singapore Biennale 2013: If the World Changed, and served as a cocurator and Project Director. At Asia Society, he acted as cocurator After Darkness: Southeast Asian Art in the Wake of History and most recently in 2018 he served as cocurator of The Progressive Revolution: Modern Art for a New India, a pioneering exhibition on the Indian Progressive Artists Group. Tan also Chairs the jury for the IMPART Art Awards in Singapore.

Michelle Yun is Senior Curator of Asian Contemporary Art at Asia Society Museum and Associate Director of the Asia Society Triennial. She is responsible for overseeing the modern and contemporary exhibition program and the Museum’s permanent collection of contemporary art. During her tenure, Yun has served as curator or cocurator for over twenty-five exhibitions for the institution. Yun was formerly the curator of the Hunter College Art Galleries prior to her appointment to Asia Society. She has served as the Project Director of Cai Guo-Qiang’s studio and as a Curatorial Assistant in the Department of Painting and Sculpture at The Museum of Modern Art, New York, in addition to organizing numerous independently curated exhibitions. Yun is a frequent lecturer on modern and contemporary Asian art. Her writings have been included in many publications including After Darkness: Southeast Asian Art in the Wake of History; No Limits: Zao Wou-Ki; and Nam June Paik: Becoming Robot; all of which she also co-edited; Kim Tschang Yeul; Patti Smith: 9.11 Babelogue; Cai Guo-Qiang: I Want To Believe; Benezit Dictionary of Asian Artists and The Grove Dictionary of Art (Oxford University Press); and Greater New York, published in conjunction with the 2003 exhibition organized by PS1 and The Museum of Modern Art, New York. Yun earned her MA in Modern Art and Critical Studies from Columbia University and her BA from Mount Holyoke College. She is a graduate of the Getty Leadership Institute’s Executive Education Program for Museum Leaders and sits on the Advisory Board of the Mount Holyoke College Art Museum.

For updates about the Asia Society Triennial, visit AsiaSociety.org/triennial