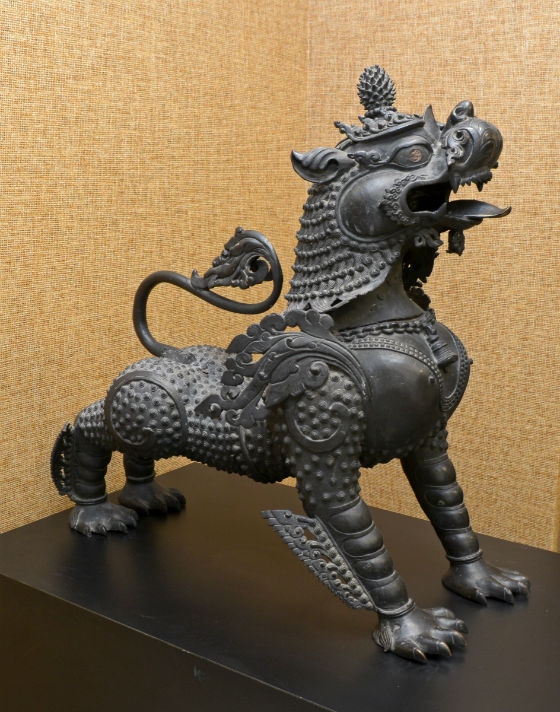 Throughout Asia, pairs of guardian lions are depicted flanking the throne of the historical Buddha, Shakyamuni. A pair of lions also often stand guard outside Buddhist temples, the male on the viewer’s right when approaching the temple and the female on the left. These ferocious creatures are believed to protect the temple and those seeking enlightenment from evil forces.

In the West, these beasts are sometimes referred to as leogryphs, stemming from their hybrid features that combine the physical aspects of a lion and the mythical creature known as a griffin.The Asia Society owns a pair of Nepalese guardian sculptures cast in bronze and dating to the eighteenth century. These leogryphs belonged to the Jacques Marchais Center of Tibetan Art on Staten Island, but since 1960 were on long-term loan to Asia Society. In 1997 the Asia Society acquired them from the Center.

The Leogryph and Our Visual Identity

Since the 1960s, the Asia Society's bronze-cast leogryph sculptures have been a part of our visual identity; their forms have inspired our graphics and logomark. As we looked forward to the 2021 launch of our refreshed brand, we decided to reach back into our archives to see how representations of our beloved leogryph have evolved in our graphic materials over the years. Here’s what we discovered.