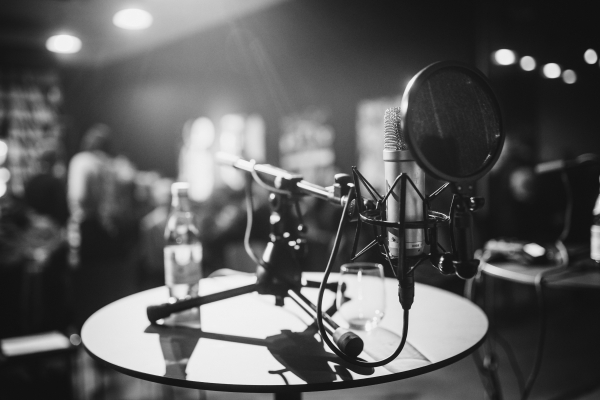 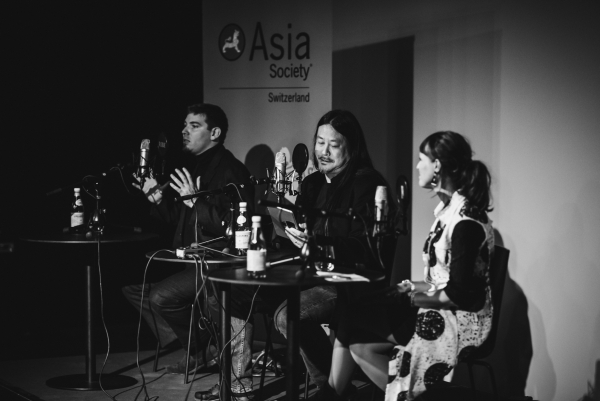 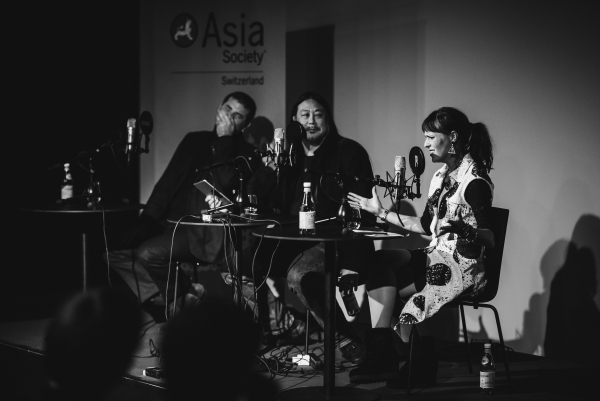 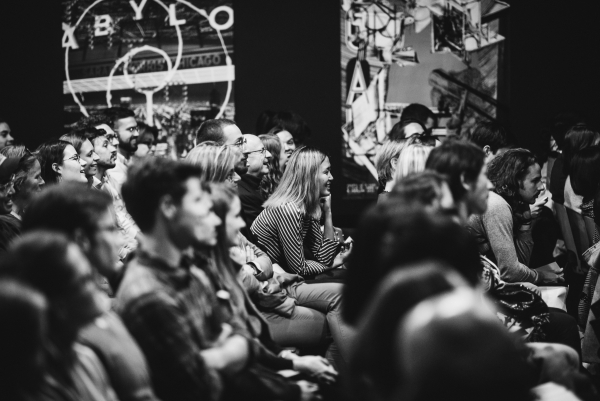 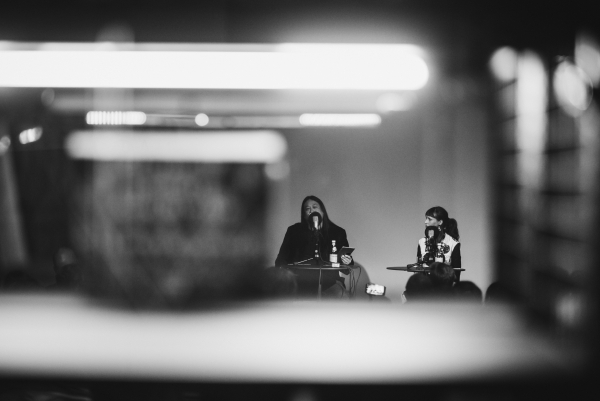 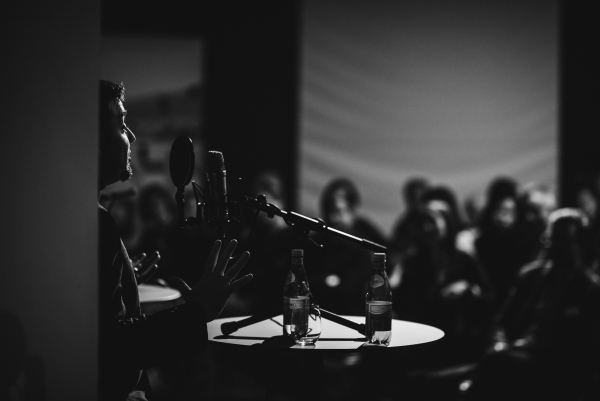 It was a first: the live taping of one of Asia Society Switzerland’s favourite podcasts – the Sinica Podcast. Host Kaiser Kuo discussed the controversial topic of China’s Social Credit System with two experts, both with extensive knowledge in their very differing fields. Rogier Creemers is a scholar at the University of Leiden, researching China’s governance and digital technology, translating and analyzing Chinese-language sources like laws, regulations or commentaries from policymakers. Manya Koetse is a sinologist, a China social trend watcher and the founder and editor of What’s on Weibo, an independent blog closely following China’s social media, its latest digital developments and its changing media landscape.

While causing disturbed reactions in the West comparing it to Orwellian «Big brother»-phenomena, the Social Credit System (SCS) is rarely openly discussed in China. Contrary to the assumption that censorship and surveillance stop debate about data privacy in China, its citizens are rather welcoming the several initiatives that have been summed up in the West as the Social Credit System. And that is a crucial point: there is not a singular system yet, as announced in 2014 in the Planning Outline for the Construction of a Social Credit System. But there are experiments all over the country, governmental and commercial ones. Governmental experiments work solely with a binary system of blacklists, punishing wrongdoings such as not paying back debts by banning the people on the blacklist from taking high-speed trains or planes – and they are being discussed on social media. The outcry was huge for example when a student with excellent test scores was not allowed to enter a private university due to his father’s unpaid debts. Commercial experiments like Alibaba’s Sesame Credit are a blend of user trust systems and loyalty schemes, scoring your behavior according to your data – i.e. your behavior – on the interconnected applications that offer everything from social media to e-commerce, e-banking, and sharing bikes. If you have a high score you can get benefits ranging from saving the deposit at the bike rental to skipping lines at hospitals.

All speakers engaged in getting that point across: since Rogier Creemers first brought the SCS to the public’s attention in 2015 all the different governmental and commercial initiatives have been conflated by western reporting over and over again, oftentimes verging on mere clickbait. Manya Koetse called it «just lazy journalism», missing basic factchecking. Creemers put that in perspective of his work, adding that fact checking in that case is difficult: it took him two and a half years from finding out about the plans for an SCS until he could publish his paper China’s Social Credit System: An Evolving Practice of Control.

Kaiser Kuo opened up the context of these clickbait reports on the SCS to the discourse of tech-anxieties in the West in general and with regard to China in particular, citing only the latest «horrified fascination»: the Bloomberg report on rice grain sized microchips built in devices to spy on the West. According to Kuo digital technology was the posterchild of the peaceful world in the 1990s. Today though people like the late Steven Hawking or Elon Musk are warning about «summoning the demon of artificial intelligence». China’s economic advancement and initiatives like «Made in China 2025» fit into these fears perfectly, drawing a dystopian, Black Mirror scenario, where China is this techno-authoritarian villain. «It’s almost therapeutic – it’s like scratching an itch», Kuo added, while for Chinese citizens it has been true for almost 40 years now, that improvement of life comes in lockstep with improvement of technology.

As emphasized many times by the panelists, making simple statements about the SCS is complicated, because no single SCS is yet in place – as it is planned to roll out in 2020 – and oftentimes existing blacklists are being conflated with commercial programs aimed at consumer benefits. Given the flashy and misleading reporting in the media vs. the nuanced explanations during the podcast, questions about too positive judgements of China and its new digital technologies were roaming the room. But the speakers pointed out that: China doesn’t need an SCS to govern its people – it has many other elaborate policies and institutions to do that. People in China itself welcome the SCS though, because they are living in an extremely low-trust society with scandals in food or vaccine production sites shaking the whole country. The transition to a high-trust society comes at a price, Kaiser Kuo explained, and he compared it to the transition of New York since the 1990s. Its citizens nowadays might really enjoy safe trips with the subway, but the strict police control and the «Broken Windows» strategy under Rudolph Giuliani 20 years ago meant that one had to expect fierce legal consequences for relatively minor offences.

Listen to the Podcast here:

Read our «Behind the Scenes» interviews with the speakers here:
Kaiser Kuo: «It Is Not Always Just About High-Level Politics»
Manya Koetse: Social Media in China
Rogier Creemers: Understanding the Great Other

Kaiser Kuo is the co-host of the Sinica Podcast of SupChina, founded in 2010. He was born in New York to parents originally from China and lived in Beijing from the late 1980s until 2016. There he co-founded the Heavy Metal band Tang Dynasty—a band that went on to considerable success during the 1990s. He has also been working as an editor, a tech sector reporter and a communications professional (serving as director of international communications for Youku, a leading Internet video site in China, and for Baidu, China’s leading search engine).

Manya Koetse is a China social trend watcher and the editor-in-chief of What’s on Weibo, a website providing social, cultural & historical insights into an ever-changing China, with a focus on online media and digital developments, popular culture and gender issues. She also works as a consultant, researcher, and public speaker on (consumer) behavior, social trends, digital developments & new media in China.

Rogier Creemers is a researcher in the law and governance of China at Leiden University. He holds degrees in Sinology and International Relations, and a doctorate in Law. His research focuses especially on the Chinese government’s approach to governance and technology, as well as China’s participation in global cyber affairs. Creemers has received a Vidi grant from the Netherlands Organisation for Scientific Research for a project on the Chinese smart state. He is also a co-founder of DigiChina, an initiative based at New America to provide greater insights in China’s digital policies.